The 9 MVPs of this week's horribly bittersweet episode of 'Game of Thrones.' 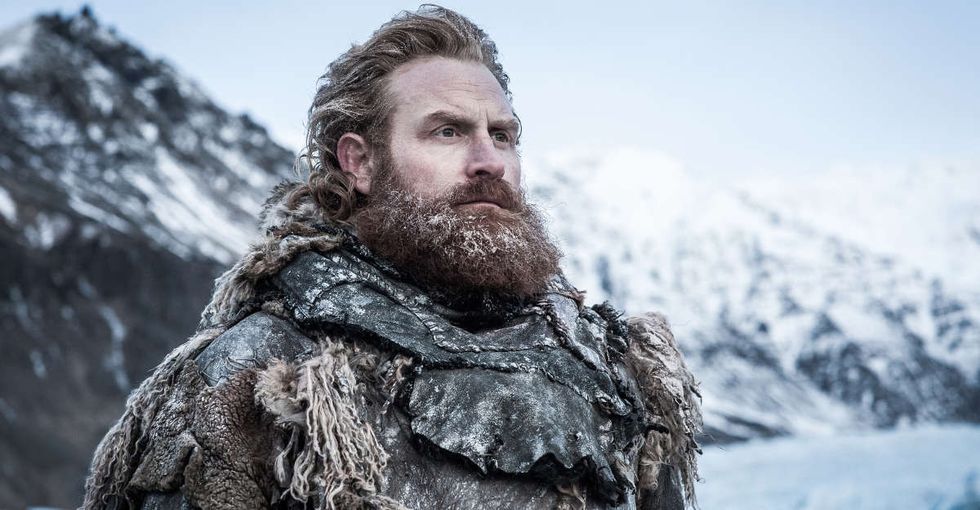 Welcome to “A Song of Nice and Fire” Upworthy’s weekly series recapping one of the most brutal shows on TV. Since brutality is not really in our wheelhouse, Eric March has taken it upon himself to dig deep, twist and turn, and squint really hard to see if he can find the light of kindness in all the darkness. He may not always succeed, but by gosh if he won’t try his best.

Here’s what he found on this week’s "Game of Thrones."

Last week, Jon Snow and the magnificent seven-ish went striding beyond The Wall, into the unknown and certain danger.

So. How'd it go? Image by Helen Sloan/HBO.

In such a boondoggle of an episode, it was hard to find MVPs. Still, I have to give credit in the vanishingly few places where credit is due.

Here are the MVPs of niceness and kindness from Game of Thrones, season 7, episode 6:

1. Tormund Giantsbane, who defended the honor of gingers everywhere

Though the witty banter of gruff dudes trekking through the snow proved particularly saltily entertaining this expedition, special points to Tormund for characterizing pale, freckled redheads as "kissed by fire." Representation matters! Even for pasty white people.

Tormund earns double points for puncturing The Hound's self-serious facade for a second and a half, and triple points for giving the entire U.K. a much-needed post-Brexit morale boost.

2. Arya's bag of faces, for enabling a medieval feminist fantasy

Sometimes when you snoop in your sister's bedroom, you're going to find something you wish you hadn't, whether it's a M-A-S-H note to your crush or a satchel full of flesh-covered masks.

Understandably, Sansa is a little disturbed when she finds exactly the latter under Arya's bed.

But it's hard to blame the tiny Stark assassin. As she explains — in typical "will I or won't I eviscerate you" fashion — in 14th century Westeros, options are pretty limited for 11-year-old girls, unless you slice off a couple of old men's faces and wear them as your own from time to time.

This, weirdly, makes a ton of sense, although perhaps slightly less than Sansa's drive to become like Cersei or Littlefinger or Ramsay to get what she wants, albeit in more subtle ways than simply slipping their actual, literal faces over her face. Predictably, Westerosi misogyny dictates that the elder Stark sister also gets more grief about her version — sure, devisaging your enemies is a bit gauche in polite society, but taking on their personas is just so girly.

Until the wheel gets break'd, them's the breaks, it seems.

3. Jon Snow, for falling into an obvious White Walker trap to make things more exciting beyond The Wall

When you stumble upon a small parade of zombies, and they're suspiciously easy to beat, that's a sign that holy crap you guys there are like 7 bazillion more zombies like 20 feet away hiding behind a rock is this the first time you've been here come on!

Aside from ones involving methodically conjured mental and physical torture, few operations are made smoother by the presence of Cersei Lannister. Thankfully, she decides to sit this one out, hopefully getting in one last wine and rejoicing in the misfortune of her sworn foes session before next week's queen-on-queen parlay.

That's all! See you next week for the finale of a Song of Nice and Fire 2017, when presumably, Jaime and Cersei's baby is born healthy and strong, Sansa and Arya launch a public speaking tour about the power of forgiveness, and the living and dead use The Wall for an epic game of volleyball.