People are dyeing their hair like space, and it's awesome.

Some intentional, others by accident. All gorgeously sciencey. 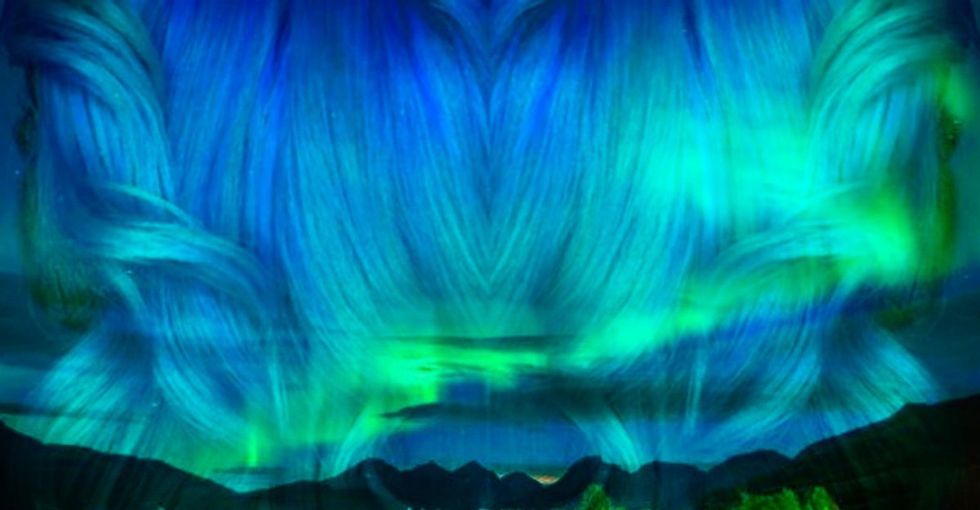 Who says that space can't be glamorous?

OK, OK — no one has said that, but maybe this is a topic worth discussing.

SPACE HAIR IS A THING.

A beautiful thing. So I looked into this. There are a handful of specific space hair moments, but there are droves of beautiful hair colors that look downright galactic.

Looking at all the hair-color trends out there, I couldn't help but think, "I SEE SPACE, PEOPLE."

Here are just five of the many many beautiful colors of hair that can mean only one thing: Space hair is happening.

1. This hair might not have intended to be inspired by Charon, Pluto's moon, but can you deny the resemblance?

A stronger color at the roots and classy gray. Werk!

Charon the moon no longer gets to say it orbits a planet due to Pluto's demotion, but still, it's lookin' good immortalized in hair.


2. And here we have the Veil Nebula of hair-colors.

According to NASA, "This close-up look unveils wisps of gas, which are all that remain of what was once a star 20 times more massive than our sun."

3. If you squint, this woman's head IS the Northern Lights.

4. NASA just got images from the Hubble telescope of the Twin Jet Nebula, a binary star system that also goes by the name of PN M2-9. And lo, this gal is rocking it in hair form.

5. Here we have an uncannily accurate representation of what NASA describes as "planetary nebula called NGC 6818, also known as the Little Gem Nebula." Also — hair!

Image by ESA/Hubble and NASA with acknowledgement to Judy Schmidt.

"This colorful bubble is a planetary nebula called NGC 6818, also known as the Little Gem Nebula. It is located in the constellation of Sagittarius (The Archer), roughly 6,000 light-years away from us. The rich glow of the cloud is just over half a light-year across — humongous compared to its tiny central star — but still a little gem on a cosmic scale."

The cosmos has some really good color theory.

Space-aholic Neil deGrasse Tyson often laments that the wonder at space is disappearing from our lives.

Were it not for @NASA & kindred programs of discovery, I wonder what hope would remain for our species to rise above itself.
— Neil deGrasse Tyson (@neiltyson) July 12, 2015

We don't tilt our heads up in wonder at the complexities, the vastness, the coolness of space and the cosmos.

Need to cry, but don't want others to know? Look up to the stars. Your tears won't fall, and the cosmos will make you smile.
— Neil deGrasse Tyson (@neiltyson) December 20, 2013

But there's space and the cosmos, re-appearing in a pretty special place ... hair salons.

Will a bunch of brightly colored hairdos help the space program or teach us enough science to explore space? Probably not.

But it just goes to show, we've still got space love in (er, on) our heads.

And that if we put our heads together (even if they're not dyed to look like nebulae), we still sometimes look up in wonder.

Those of us raising teenagers now didn't grow up with social media. Heck, the vast majority of us didn't even grow up with the internet. But we know how ubiquitous social media, with all of its psychological pitfalls, has become in our own lives, so it's not a big stretch to imagine the incredible impact it can have on our kids during their most self-conscious phase.

Sharing our lives on social media often means sharing the highlights. That's not bad in and of itself, but when all people are seeing is everyone else's highlight reels, it's easy to fall into unhealthy comparisons. As parents, we need to remind our teens not to do that—but we also need to remind them that other people will do that, which is why kindness, empathy, and inclusiveness are so important.

Writer and mother of three teen daughters, Whitney Fleming, shared a beautiful post on Facebook explaining what we need to teach our teenagers about empathy in the age of social media, and how we ourselves can serve as an example.

Keep Reading Show less
culture
Get stories worth sharing delivered to your inbox
By signing up you agree to Upworthy's privacy policy.
Trending Stories
family
Family