Kids stuck in a war zone have been through so much. This 'Safe Space' lets them be kids again.

These are crucial moments for the adults of tomorrow. 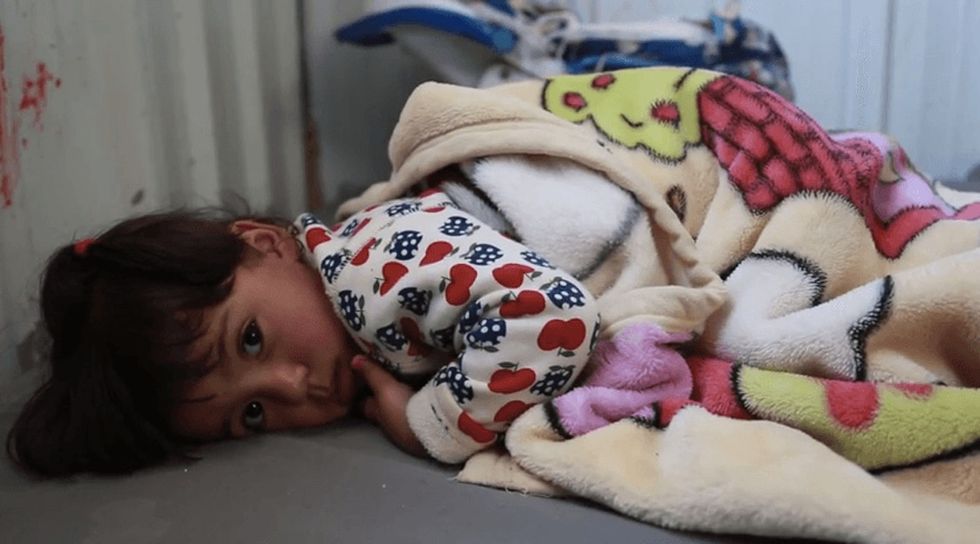 Kids need to play because that's how they learn.

What's a childhood without running around, playing games, and being curious about the world?

But in conflict areas, that can be impossible for a kid.

Instead of playing and learning, many children who live in conflict areas find themselves fearing for their lives, fleeing from their homes, and mourning the loss of their family and friends.

Safe to say she's been through a lot. Image via CARE.

This is especially true of the children stuck smack-dab in the middle of the Syrian conflict.

Talk about chaotic. Since the Syrian conflict began in 2011, Syria's kids have been forced to grow up way too fast in the most traumatic and uncertain way possible. Over 1 million of them have been displaced from their homes — many losing their families, their sense of safety, and their ability to be ... kids. Many have fled to escape the violence of their neighboring countries Turkey, Lebanon, Jordan, and Iraq.

For kids who've fled to Jordan, some have found a "Safe Space."

Child refugees have been welcomed by many organizations and shelters. One in particular is called "Safe Space," run by CARE in Jordan. The four Safe Space centers provide an outlet for kids to grieve, to process their thoughts, to run around, and to be kids in a safe and nurturing environment.

"It's a place where children can come to have fun and also to learn how to deal with having to live through a very harsh experience of war, of refuge, of losing their loved ones," said Salam Kanaan, Director of CARE Jordan in the video below. "The feeling of loss and the grief around that, for young children, can be really traumatic. Coming to the Safe Space will bring them out of this trauma and give them an outlet for all of these sad memories that they have been experiencing. "

"It's a place where children can come to have fun and also to learn how to deal with having to live through a very harsh experience of war, of refuge, of losing their loved ones."

It's great to see a place that not only values the safety and security of these children, but also their emotional well-being. It's a rainbow at the end of a horrible situation by providing a secure place for them to go and to grow.

Who doesn't love a good maze? Image via CARE.

They are bringing smiles and hope to some of Syria's kids who have experienced such loss.

It's hard to imagine what it'd be like to live your childhood under such horrific circumstances. While these kids now have a support system, there are a lot of kids out there who don't. Everyone goes through hard times in life and this is a positive reminder of how much better off we all are when we support each other.

Before you peace out and go on your way, consider getting involved in CARE's work with child refugees. And, if nothing else, show someone some extra support today. You never know who will need it.

There is hope. Byeeeeeee. Image via CARE.