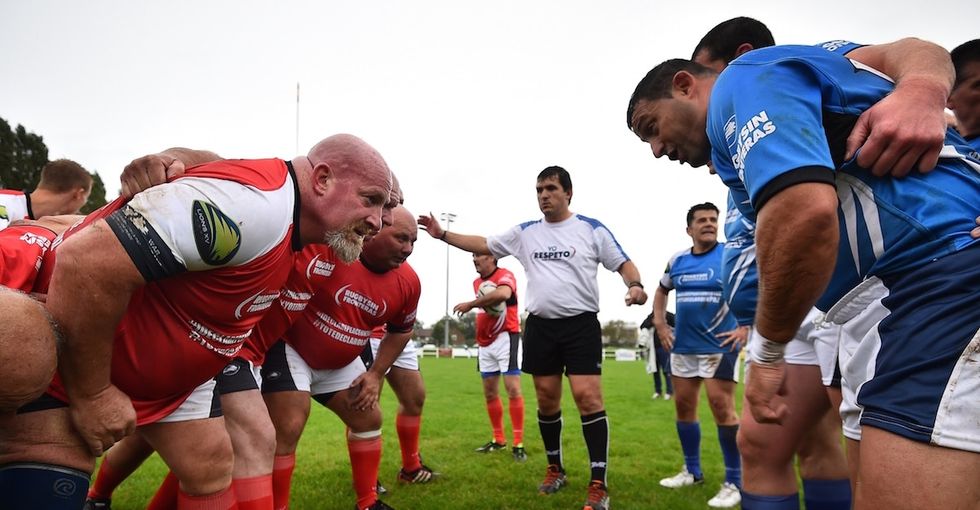 Can you imagine shaking the hand of someone who once tried to kill you? It's almost unthinkable. But these men did it.

All photos by Ben Stansall/AFP/Getty Images.

Over 900 people died in the 1982 Falklands War, or the Guerra de la Malvinas. The 74-day confrontation between Argentina and the United Kingdom was fought for control over two island territories in the South Atlantic.

Sadly, the war's toll was much greater than just the death count as open wounds remain for many of its survivors even decades later.

But recently, veterans from both sides gathered to heal together. On the rugby field.

SAMA, the South Atlantic Medal Association, believes some 264 U.K. veterans have committed suicide in the years since the war. As for Argentinian veterans, many of them have banded together to seek justice for mistreatment and abuse that occurred at the hands of their own commanding officers.

But for one day, at least, the ugliness of the war was set aside to celebrate one of the things Argentina and the U.K. share: their love of rugby.

The match was organized by Rugby sans Frontieres (Rugby without Borders), a nonprofit built to spread social tolerance and solidarity through competition.

Argentinian and British veterans played side by side as both teammates and opponents.

The match was kept short – after all, most of the veterans are in their 50s now – and played with a ball blessed by Pope Francis.

Think they took it easy on each other? Not a chance.

But the message was clear; their days as enemies are over.

According to one veteran, "We were victims of circumstance. Politicians failed, and we had to go and try to fix what politicians did wrong."

The men didn't show up to debate Argentinian sovereignty or to air grievances or to mourn.

They were there to make peace.

The veterans even went out for a beer afterwards.

"The beauty of rugby is afterwards, we talk, we drink, and we laugh," 57-year-old vet David Jackson said.

"Reconciliation is important," said another. "This is an emotional moment."

33 years ago, these men were sworn enemies. Today they're brothers.

The fact that they were able to put aside their harrowing memories of the war and see their old foes as fathers, sons, brothers. As people. It's just...