Her struggle with her acne is a lesson in developing a healthy relationship with makeup.

'Reflecting on your own self-worth is the most important thing you can do every day.' 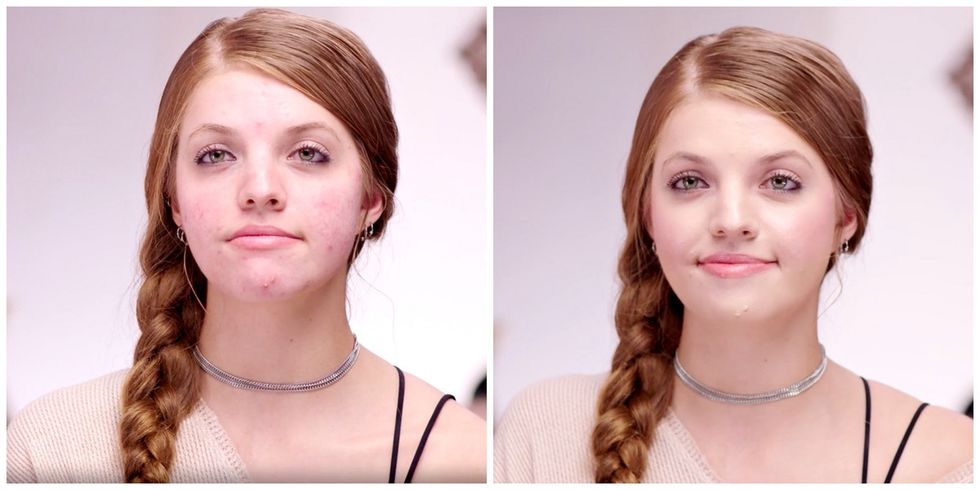 MacKenzie has scars from high school — and not just emotional ones.

When she was 13, she started developing severe acne and redness all over her face. As a shy, sensitive teen, MacKenzie just wanted to blend in, but the acne made it extremely difficult.

MacKenzie. All photos via Dermablend.

"People thought I couldn’t really stick up for myself," MacKenzie recalls. "So they just kind of made me an easy target."

She tried using foundation, but it ended up accentuating her acne rather than covering it. Of course, this left her feeling even more defeated.

Things like painting and volunteer work, however, helped her distract herself from the negativity she experienced.

One of MacKenzie's paintings.

In fact, volunteer work, especially when it involved mentoring younger kids, was so important to MacKenzie, she decided to pursue a bachelor's degree in social work. She also mentors students at a high school near her university.

Not surprisingly, MacKenzie very much relates to the struggles her mentees are currently facing. She often tells them something of which she regularly reminds herself:

"Reflecting on your own self-worth is the most important thing you can do every day."

MacKenzie also found solace in a new kind of makeup which helped cover her acne and filled her with confidence.

She discovered Dermablend, and it's helped her feel so much more comfortable because she was able to use it more for self-expression rather than something to hide behind. It's allowed her to be much more creative with the image she reflects back at the world.

"That outlet has helped me reflect upon my own beauty," MacKenzie says.

Today, she doesn't feel like she always needs to wear makeup. It's her choice, and that's incredibly empowering. Her foundation helped give her the self-assurance to make that choice. Now, whether she decides to wear makeup or not, she sees all the things that make her beautiful.

"At the end of the day, I look in the mirror and see someone who’s grown so much that nothing can bring me down," MacKenzie says. "Makeup or no makeup, I still feel so confident in myself."

Growing up, she felt that her acne made her an outsider. Now it's something that helps her relate to the kids she mentors.