Frank Ocean penned an emotional letter on homophobia that everyone should read.

Frank Ocean's letter is both heartbreaking and a necessary read. 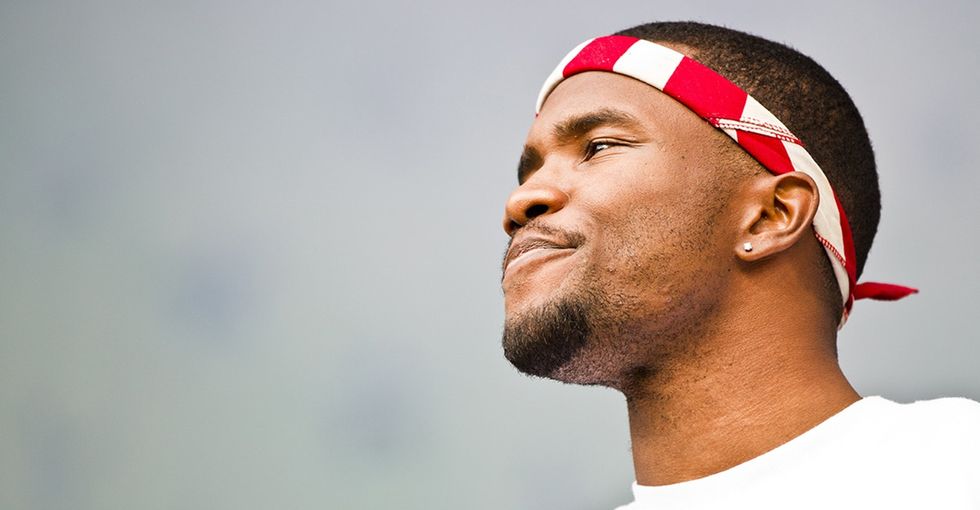 Has anyone seen Frank Ocean lately?

Fans have been anxiously awaiting new music from the 28-year-old singer/songwriter and rapper, but it’s very clear that Ocean has been using his time to attack some bigger issues.

What are you up to, Frank?

In a heartfelt letter published on Ocean’s personal Tumblr, the artist penned some tear-jerking words about growing up in a homophobic environment.

He also discussed transphobia and his heartbreak about the Orlando massacre:

"I read in the paper that my brothers are being thrown from rooftops blindfolded with their hands tied behind their backs for violating sharia law. I heard the crowds stone these fallen men if they move after they hit the ground. I heard it’s in the name of God. I heard my pastor speak for God too, quoting scripture from his book. Words like abomination popped off my skin like hot grease as he went on to describe a lake of fire that God wanted me in. I heard on the news that the aftermath of a hate crime left piles of bodies on a dance floor this month. I heard the gunman feigned dead among all the people he killed. I heard the news say he was one of us. I was six years old when I heard my dad call our transgender waitress a faggot as he dragged me out a neighborhood diner saying we wouldn’t be served because she was dirty. That was the last afternoon I saw my father and the first time I heard that word, I think, although it wouldn’t shock me if it wasn’t. Many hate us and wish we didn’t exist. Many are annoyed by our wanting to be married like everyone else or use the correct restroom like everyone else. Many don’t see anything wrong with passing down the same old values that send thousands of kids into suicidal depression each year. So we say pride and we express love for who and what we are. Because who else will in earnest? I daydream on the idea that maybe all this barbarism and all these transgressions against ourselves is an equal and opposite reaction to something better happening in this world, some great swelling wave of openness and wakefulness out here. Reality by comparison looks grey, as in neither black nor white but also bleak. We are all God’s children, I heard. I left my siblings out of it and spoke with my maker directly and I think he sounds a lot like myself. If I being myself were more awesome at being detached from my own story in a way I being myself never could be. I wanna know what others hear, I’m scared to know but I wanna know what everyone hears when they talk to God. Do the insane hear the voice distorted? Do the indoctrinated hear another voice entirely?"

In 2012, Ocean changed the dynamics of the hip-hop community forever by opening up about his own sexuality before releasing his Grammy-nominated album, "Channel Orange."

Ocean's discussion of falling in love with his male best friend — an unrequited love addressed repeatedly throughout the album — was a first in the hip-hop industry, ruffling the feathers of some of his fellow rappers and listeners.

Artists like T-Pain insisted that Ocean wouldn't find fellow musicians willing to collaborate with him, and some of Ocean's fans declared they were done with his music.

But Ocean has, in fact, collaborated with many top artists since then. He has several awards under his belt too, including two Grammys.

Rappers like Jay-Z have supported Ocean too, and while hip-hop is notoriously known to push out anti-gay lyrics, many listeners are asking for increased inclusivity in the genre thanks to Ocean's honesty.

With transphobic bathroom bills floating around several states, the recent massacre in Orlando, and staunch opposition to LGBTQ rights around the world, Ocean's words matter.

His honesty and transparent pain are needed in the hip-hop industry now more than ever.

Hip-hop artists like Ocean should continue to express themselves in a way that is inclusive of marginalized groups.

Most recently, rapper Kid Cudi not only slammed homophobia in U.S., but he also vowed to implement change in the hip-hop community, showing us all how to put action behind our words.

While many of us are still waiting anxiously for Ocean to bring more awesome music to the charts, it's been incredible to watch him truly express himself in written words too.