Finland's new, weird school 'courses' say a lot about how we teach our kids. 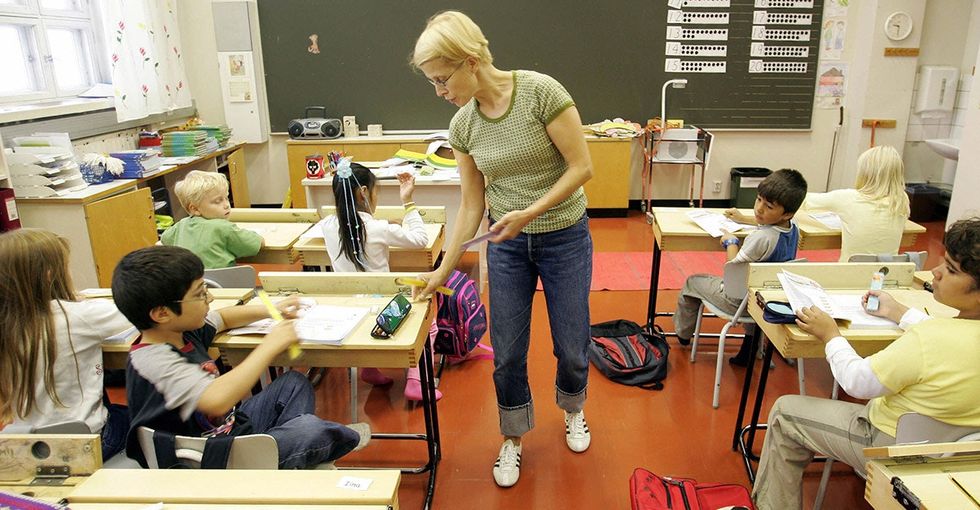 I don't know if you've noticed this, but there is no such job as "math."

There are mathematicians, sure, or engineers, but even math-heavy jobs still need strong foundations in grammar, technology, and history if they want to be successful. So it's a little weird that American schools divide these subjects so heavily, like they are ingredients in a soup.

In Finland, they're trying a different approach. Rather than teach subjects as dry, separate ingredients, from now on, it's all cooking together.

Finland's concept is called "phenomenon-based learning." Here's how it works:

Rather than focus on one subject like math, students and teachers sit down and pick a real-world topic that interests them — climate change, for example — which is then dissected from different angles. What's the science behind it? How are nations planning on dealing with it? What literature is there about it?

This isn't a replacement for traditional subjects — those are still taught too. Instead, these topic-based studies are their own course and an opportunity to tie a bunch of skills together. The kids learn holistically and use real-world skills (like using technology) to tackle a subject the same way they would as an adult.

Why does this matter for us? Because while American schools struggle, Finland is literally at the top of the education game.

Inside a Finnish classroom in 2005. Photo from Olivier Morin/AFP/Getty Images.

Finland's schools are extraordinary. Their primary school system was ranked #1 in the world in 2016, according to the World Economic Forum. The United States, for comparison, ranked 39th. In short, we have some things to learn from the Finns.

Finland has been experimenting with phenomenon-based learning since the 1980s. Other schools around the world have too, but thanks to a curriculum change in August 2016, every school in Finland will start adding these special topic-based courses. Each school will be able to tailor the specifics of the idea to fit them best.

Getting kids ready for the real world is tough. There isn't a single magical solution. But this looks like a pretty neat idea.

The program’s not without trade-offs or critics. Some teachers are worried that less able students might struggle to keep up, for instance. But Finnish heads of education, like Anneli Rautiainen, are hoping the benefits will shine through, as the BBC reported.

Education is complicated, but if there's anyone we should be paying attention to, it's Finland.