A group of Syrian refugees wandered into a furry convention — and magic happened. 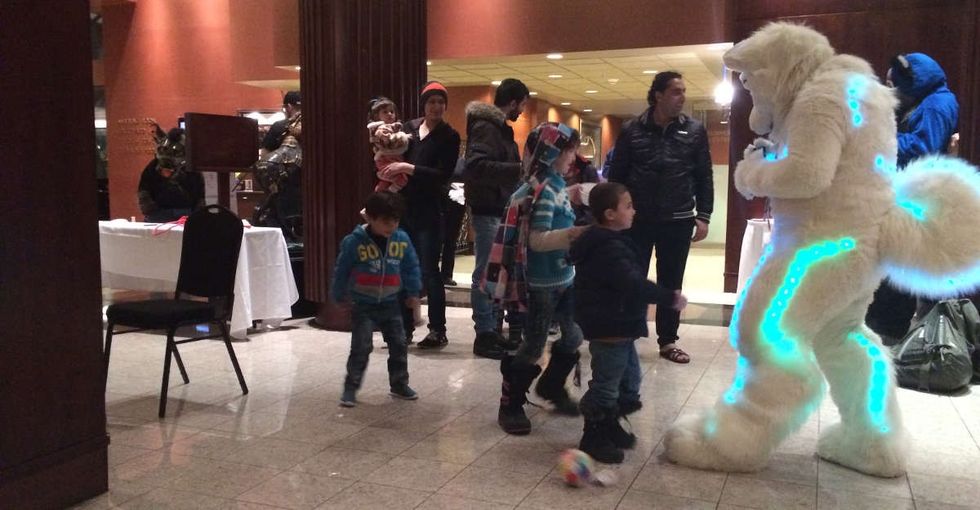 Gabriel Sickel, an actor and musician from Rio Vista, California, can frequently be found hanging out in a white cat suit with blue eyes and a mile-wide grin.

Sickel is a furry — and like many furries, frequently role-plays as an anthropomorphic animal, often in an intricate full-body cat costume, called a fursuit. While shows like "CSI" have cast furry-dom — reductively and unfairly, according to many furries — as a hobby that's exclusively sexual in nature, for furries like Sickel, getting into costume is primarily about performance, identity, and a sense of community.

On the last day of VancouFUR, the refugees arrived.

As the conference was drawing to a close, word began circulating among the over 800 attendees that a group of Syrian families had recently arrived in Vancouver.

The refugees' first stop would be the Executive Airport Plaza Hotel, where the furry conventioneers were staying.

A note distributed to VancouFUR participants warned that, for the refugees, arriving in the middle of a furry convention would likely be a "major culture shock" and urged the furries to steer clear if possible.

"Keep in mind that they likely will not want to interact with you, and that consent is important for everyone," the message read.

As two large groups staying in same hotel, however, the furries and the refugees couldn't avoid each other for long.

According to Sickel, many of the refugee children were a little scared at first, but the conventioneers — a few of whom had mascot experience — were excited to entertain them.

"After about five minutes, they all warmed up and then they started jumping around with me on my tail," Sickel told Upworthy. "It was really cute."

Sickel was proud to help provide the refugee children with an unforgettable first few days in their new country.

"It made me feel great." Sickel explained. "I mean, I was aware of the Syrian situation, so knowing that I could help their introduction to Canada be a lot warmer, I felt very privileged to get to do that."

Other VancouFUR attendees said that making newcomers feel welcome is exactly what the furry community is all about.

"It's sort of a makeshift safe heaven for people who feel bullied, discriminated, or alone," Chris Jantz, another convention participant, told Upworthy. Entertaining the refugees, he explained, was an extension of that ethic.

"Our fandom is all about the acceptance of those oppressed in one way or another."

Ultimately, there was plenty of love to go around.

"Khord Kitty ... got a big hug from one of the parents," Jantz said. "It showed us that not only can we, from different cultures, get along just fine, but I think it's heartwarming how much they appreciated what we did for their kids."

It was a scene few of the furries would soon forget.

"Thousands of miles and two different cultures ... but a warm greeting does wonders," another conventioneer, who goes by JayCat, told Upworthy via Twitter.

"We're all human after all!"