13 gorgeous photos of wild Florida that show why it's worth saving.

'I think if everyone would spend just a little bit of time experiencing our natural spaces, they would fall in love with them the way I have, and we’d have an unstoppable force for their protection.' 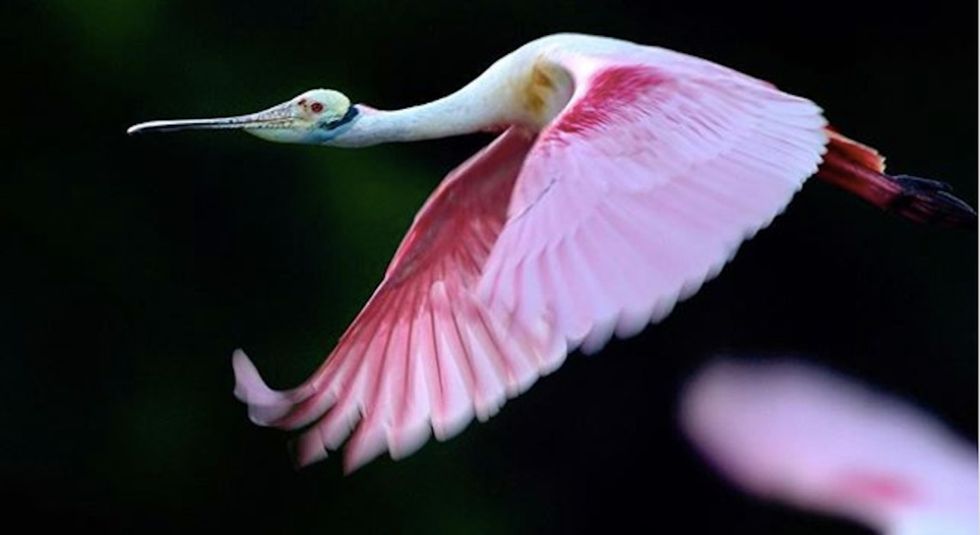 While that might sound strange for the average photographer, it makes sense given Ward's speciality, which is wilderness conservation.

Carlton Ward in his element. Photo via Upworthy.

Ward spends most of his time making his way through the lush Everglades of the Florida Wildlife Corridor in order to capture its majesty on camera in as many ways as possible.

And the corridor is no small territory. Its nearly 16 million acres are home to thousands of different species, including over 40 endangered or threatened animals, such as the whooping crane, the Florida panther, and the west Indian manatee.

Together with members of his conservation team, Ward has crossed 1,000 miles of it — twice.

Obviously Ward's not afraid to get his feet wet to save wild Florida from encroaching land developments.

Ward paddling through the glades. Photo via Upworthy.

According to Ward, 100,000 acres of land are given over to housing growth every year, which means pretty soon there won't be any room left for the wildlife living in the corridor.

But it's not just about the flora and fauna — the encroachment also threatens local residents' drinking water.

"The Everglades watershed provides water for 9 million people," Ward explains. "So this is our water tower. This is absolutely essential for humans to survive on this peninsula."

In order to further protect the corridor and all who rely on it, he created the Florida Wildlife Corridor organization.

FWC utilizes science and unforgettable imagery to raise awareness around the corridor's plight and to get people to realize why it needs to be saved.

Perhaps the most amazing aspect of Florida's wild territories is that they're mostly connected throughout the state. FWC is working tirelessly not only to protect that natural network, but restore it. They have a goal of conserving 10% of it every year so that 300,000 acres are saved by 2020.

Ward's photos have already inspired a network of devoted followers. Now he's rallying them to get out in the wild and share their own experiences.

"I think if everyone would spend just a little bit of time experiencing our natural spaces, they would fall in love with them the way I have, and we’d have an unstoppable force for their protection," Ward says.

He asks them to share their Florida photos under #KeepFLWild to help highlight the conservation mission.

A son took a photo of his father at Suwannee State Park.

Someone else captured a great egret on a branch.

Just take a look at Ward's incredible shots, and you'll understand why he's inspiring so many people to venture out into the glades.

Here's a 100-year-old long-leaf pine standing against the clouds:

A century old longleaf pine stands against the night sky at The Nature Conservancy's Disney Wilderness Preserve, an important part of the Everglades Headwaters National Conservation Area. The orange glow is from the lights of suburban Orlando. Sprawl is consuming 20 acres of wild Florida every hour. Good news is that by being close to town, this preserve is easy to visit and enjoy. @nature_org @fl_wildcorridor #FloridaWild #KeepFLWild. Please follow @CarltonWard.

And a couple of spoonbills taking flight.

A favorite photo from 2008: Roseate spoonbills take flight in front of sunset shadowed mangroves at Audubon's Coastal Islands Sanctuary in Tampa Bay. The roseate spoonbill is characterized by pink feathers and a spoon-shaped bill, which it moves back and forth as it forages in shallow wetlands and bays. With conservation measures, state populations have rebounded from a low of only 15 pairs counted in 1935. Tampa Bay is now home to 15 percent of spoonbills living in Florida, where loss of wetland and mangrove habitat still threatens their survival. #spoonbill #bird @audubonsociety #tampabay #tbt #FloridaWild #keepflwild Please follow @CarltonWard.

These are marsh islands at sunset.

A favorite photo from springtime in Florida: an American alligator glides through the reflection of cypress trees on the surface of a pond just as the sun sets over Babcock Ranch State Preserve, near Fort Myers. #FloridaWild #LoveFL #photooftheday #reflection @natgeocreative @fl_wildcorridor #nanpapix

This Ogeechee tupelo tree sits near the Florida-Georgia border.

Ogeechee Tupelo - one of my favorite landscape photos, shot on the Suwannee River near the Georgia Florida border on day 96 of the 2012 @fl_wildcorridor expedition from Everglades National Park to the Okefenokee Swamp. It was drizzling this day. A four second long exposure on a tripod soaked in the even light and vibrancy of the emergent spring leaves. A polarizing filter, partially turned, cut through sheen of the water to reveal the surreal orange of the shallow white sandbar glowing through tannin stained swamp water while retaining the reflection of the tree on the surface. Our original expedition route would have had us hiking the final week through the Pinkook Swamp but a 30,000-acre wildfire there pushed us further west to paddle upstream on the Suwannee. It was so shallow we had to drag our boats at times but the scenery was some of the most beautiful of the whole Expedition and this photograph became my most collected print. I heard the river water was 16 feet higher the next year. From the perspective of my current project, the Okefenokee is excellent panther habitat. Hopefully a breeding population can establish there someday. Please share. #suwannee #tupelo #hope #okefenokee #floridawild #keepFLWild #landscape #river

Finally, meet the elusive ghost orchid, which only blooms in the wild in Florida.

A ghost orchid hangs from a pop ash tree in a South Florida swamp. Subjects of the book The Orchid Thief and movie Adaptation, ghost orchids have been illegally harvested in recent decades. Only two thousand plants survive in the wild. I saw this one with biologists last summer while exploring locations and testing equipment for a Florida panther project I'm doing with @Natgeo. #orchid #everglades @fl_wildcorridor #KeepFLWild

Thanks to Ward's talent and spirit, what makes wild Florida precious is crystal clear. He might very well be what saves it.

As long as other adventurers keep following in his footsteps, that is. After all, the Everglades may be his natural habitat, but he's only one man. More will have to step off the beaten path to keep Florida's wildlands safe.

"There’s a wild side to Florida that’s hiding in plain sight," Ward says. Sometimes you just have to get a little messy to find it.

Ward getting down into the glades with his assistant. Photo via Upworthy.

He goes to extreme lengths to get these stunning photos. And the results are helping to save hundreds of species.

Corrections 8/30/2017: The post misstated the amount of land given over to housing growth each year. The correct number is 100,000 acres. It also misidentified a great egret as a whooping crane.