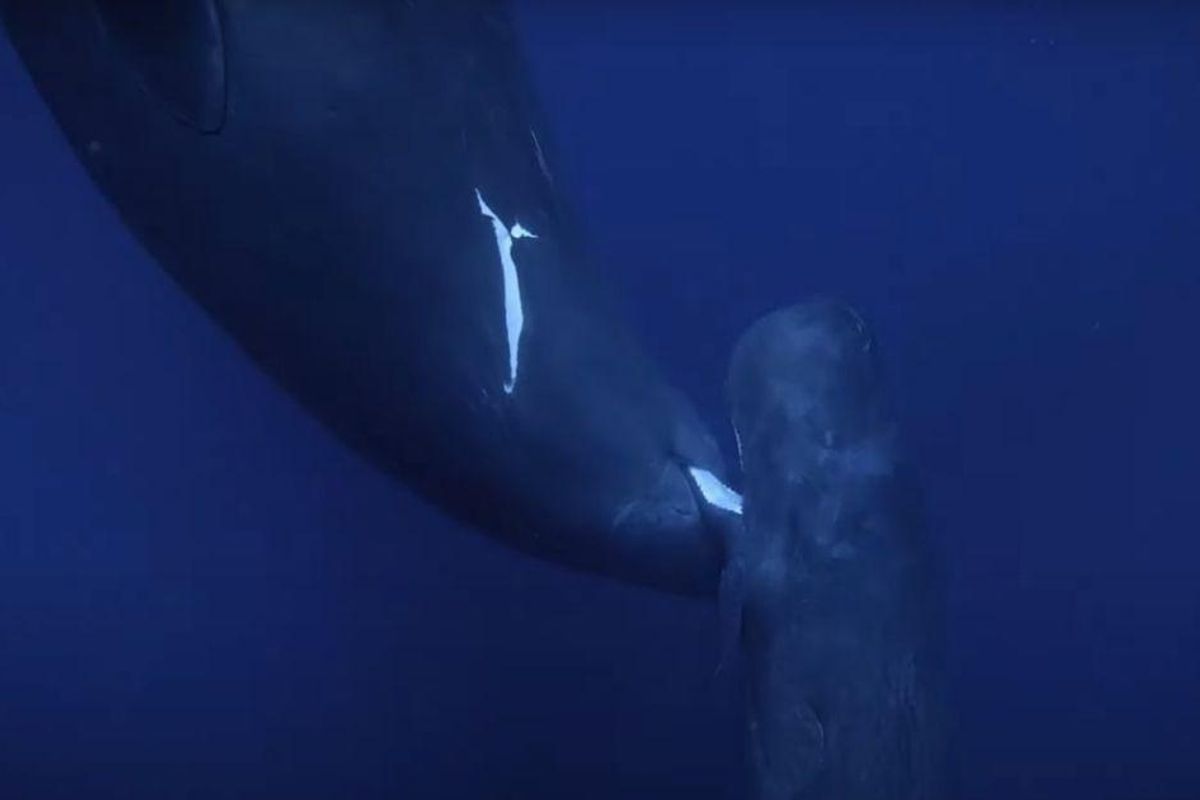 We know that mammals feed their young with milk from their own bodies, and we know that whales are mammals. But the logistics of how some whales make breastfeeding happen has been a bit of a mystery for scientists. Such has been the case with sperm whales.

Sperm whales are uniquely shaped, with humongous, block-shaped heads that house the largest brains in the animal world. Like other cetaceans, sperm whale babies rely on their mother's milk for sustenance in their first year or two. And also like other cetaceans, a sperm whale mama's nipple is inverted—it doesn't stick out from her body like many mammals, but rather is hidden inside a mammary slit.

Most whale and dolphin babies nudge the mammary slit to expose the nipple, allowing them to "suckle." A sperm whale baby's head and mouth aren't really designed for suckling in the traditional sense, obviously, as its massive nose protrudes over its much smaller lower jaw. But even in the whale sense of mom shooting milk into a baby's mouth, it's been unclear how it works for sperm whales due to their oddly shaped heads. Photos and observations have led researchers to believe that the mother whale expresses milk into the water for the baby to ingests outside of her body, but the real mechanics haven't been clearly understood.

With the proliferation of underwater photography and filmography, it may seem strange that we don't have more nursing whale evidence to examine, but because baby whales can't breathe and nurse at the same time, nursing events are usually quite short. Even being in the right place at the right time to observe a whale nursing is rare, much less capturing it on film.

A new four-part documentary series from National Geographic has provided, for the first time, film footage of a sperm whale baby nursing. It shows how the baby actually inserting its lower jaw into the mother's mammary slit, and the milk—which contains ten times more fat than human milk and is the consistency of yogurt—shooting directly into the baby whale's mouth.

The documentary series containing this footage, "Secrets of the Whales," was conceived of by National Geographic Explorer and photographer Brian Skerry and follows the stories of five different whale species—narwhals, humpbacks, belugas, sperm whales, and orcas. It was filmed in 24 locations around the world and took three years to make. Produced by award-winning filmmaker and conservationist James Cameron (of "Titanic" and "Avatar" fame) and narrated by award-winning actress and conservationist Sigourney Weaver, the series is sure to please whale lovers and nature lovers alike.

In addition to sperm whale babies breastfeeding, the docuseries shows how beluga whales name themselves so groups can keep track of each other, how baby belugas share their moms' call signs, how 30,000 humpbacks travel together from Australia to Antarctica and use breeches to talk to each other, and how a beluga pod adopted a narwhal into their bod—apparently the first ever cross-species adoption ever recorded.

Executive Producer James Cameron called the series a "challenging, daunting project" in a SXSW Conference panel last month."It's also so important for people to understand and for this film to illuminate how these creatures think, how they feel, what their emotion is like, what their society is like," he said, "because we won't protect what we don't love."

The filmmakers hope that by sharing with people the unique identities of the whales they followed, they can inspire people to think about how these magnificent mammals can be better protected.

"It's inescapable that they're being poisoned by us, that they're being deafened by us, or their behaviors, all of their feeding strategies and mating strategies and reproductive strategies are being dismantled by all of this noise from shipping channels and military sonars and all that," Cameron said. "They're going to continue to decline. The right whales are down to about 300…We barely understand these animals, so I think we have to, as a society, we have to think about doing it better."

From Your Site Articles
Related Articles Around the Web
animals
Culture