"People think pageant girls are just tall, beautiful, and have nothing to say. I have a lot to say." 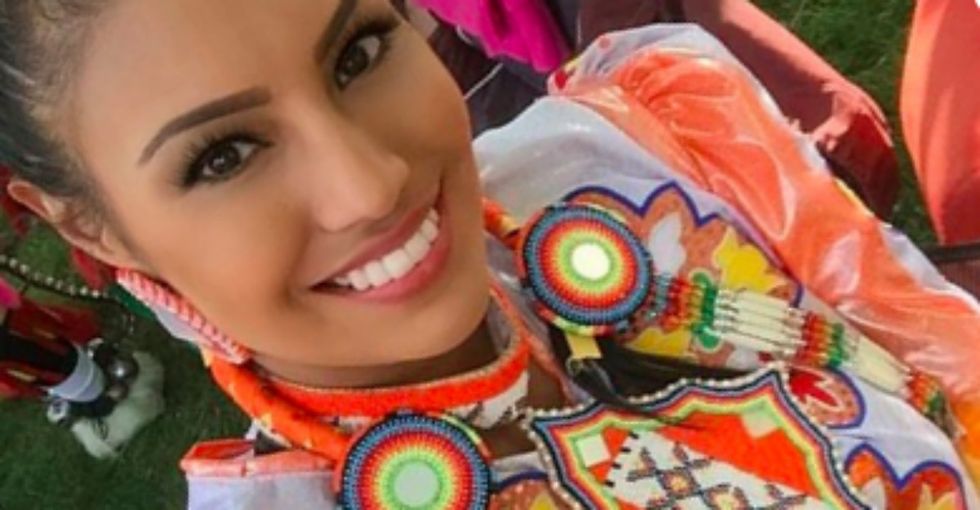 Ashley Burnham, a native of the great country of Canada, recently won the Mrs. Universe Pageant.

Tomorrow night a new @mrsuniverse2015 will be crowned. I worked so hard to get to this day in hopes of becoming the next Mrs Universe. Whatever the outcome may be I know I've done my best and I will continue to do the charitable work I love to do. Stay tuned... 😊❤️🇨🇦👑
A photo posted by Ashley Burnham (Callingbull) (@ash_burnham) on Aug 28, 2015 at 4:38pm PDT

OK, so she's got the beauty part down. Wait for the rest ...

She is also the first aboriginal winner of Mrs. Universe.

Know this: Beauty queens, for all the stigma around pageants and all that, work hard. It ain't easy. Even after all that, Ashley Burnham — also known as Ashley Callingbull — is a cut above. Why?

Well, I've got 10 reasons she is SO much more than the average beauty queen.

1. She's a part of the Enoch Cree Nation of Alberta, Canada.

2. She's getting political, and she doesn't care if you don't like it.

As she told CBC news, "There's just so many problems with it for First Nations people. We're always put on the back burner. With the bills that have been passed, we are being treated like terrorists if we're fighting for our land and our water. It's our right to, and now we're being treated like terrorists if we do anything about it. ... It's ridiculous."

On her first day as Mrs. Universe, she basically urged all First Nations people to vote out the current Canadian prime minister.

3. She reps her heritage.

After tweeting about political issues affecting the First Nations and encouraging people to vote (shocking, I know), some folks on the Internet were calling her "too political."

Well ... she had something to say to them.

Look out is right!

5. She also said this: "We need to all come together and protest what we deserve as human beings. We can't be silenced by our governments."

Me either, RuPaul. Me either.

What's she thinking? Something awesome, I bet.

6. She won the pageant. That ain't easy, folks!

And she celebrated by sharing a gram from her hometown paper. <3

7. She's a big supporter of No More Stolen Sisters, an organization that is trying to raise awareness about the BIG problem with violence against indigenous women.

She also started Who Is She, a campaign a campaign that fights the disproportional violence against indigenous women.

According to a report that the Royal Canadian Mounted Police shared with The Guardian, indigenous women are 3 to 4 times more likely to be murdered than other women. Additionally, "while aboriginal women represent just 4.3% of Canada's female population, they represent 16% of female homicide victims and 11% of missing persons cases involving women."

This chart from a report done by the Canadian government on the topic of murdered and missing indigenous women backs it up.

And as the new Mrs. Universe, Ashley is *so* not here for that.

I'm going to keep speaking up for our stolen sisters ❤️ #mmiw #whoisshe
A video posted by Ashley Burnham (Callingbull) (@ash_burnham) on Sep 9, 2015 at 5:20pm PDT

8. As a vocal survivor of childhood abuse, she's serious about breaking the stigma and silence.

And she's vocal about finding healthy ways to heal.

Official Mrs Universe Canada swimsuit shot. I'm all settled into Minsk, Belarus and my roommate is Mrs Belarus! 5 days till @mrsuniverse2015 finals! ❤️🇨🇦❤️
A photo posted by Ashley Burnham (Callingbull) (@ash_burnham) on Aug 24, 2015 at 6:29am PDT

And she also does a fab Throwback Thursday #tbt moment.

Me and @xxvii.vii.mmii have been cruising together since we were babies. She's my passenger in life. ❤️
A photo posted by Ashley Burnham (Callingbull) (@ash_burnham) on Apr 17, 2015 at 4:57pm PDT

Calling all beauty queens: Get on her level.

Yes. She's got a pretty face, and beauty standards can be oppressive, but amen to what she's using it to say.

Her fierce beliefs, strong character and fearlessness in the face of people who would silence her make her a TRUE beauty to me. Reign on, my queen!

"I'm not your typical beauty queen. I have a voice for change and I'm going to use it!" — Ashley Burnham, Mrs. Universe 2015

An innocent tweet by sports reporter Marcel Louis-Jacques erupted into a great discussion where people tried to describe the indescribable. "There's an unnamed media member in here who has never had a Dr. Pepper and asked what it tastes like," he tweeted.

The question feels like a Zen koan such as "What is the sound of one hand clapping?" or "What do you call the world?"

Keep Reading Show less
women and girls
Get stories worth sharing delivered to your inbox
By signing up you agree to Upworthy's privacy policy.
Trending Stories
racism
Family