What a Muslim mom said to her daughter about the election — and what you can say, too. 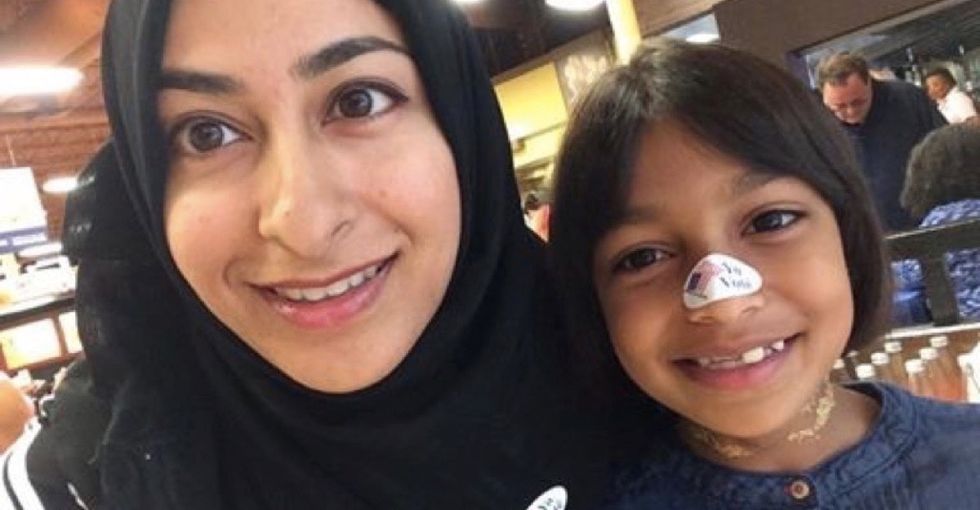 Muna Hussaini walked into her polling station near Austin, Texas, with her daughter on Election Day. Her excitement was weighed down by fear.

Now a mother of two, Hussaini was born and raised in the United States to immigrant parents from India. But as a Muslim woman who wears hijab, she's seen firsthand the angry and xenophobic rhetoric that still plagues this country. Sometimes, she still feels unsafe in her rightful home.

"This election has wreaked havoc on our family as Muslims, who have continued to look on in horror as women, Latinos, Blacks, gays ... so many have been denigrated," she confessed in a private post to tens of thousands of strangers in Pantsuit Nation, a secret Facebook group. (Her post is shared here with permission.)

"These people and their views will still be here after the election. And who will now be walking around with a target on their back?"

Hussaini watched her 8-year-old daughter press the buttons in the voting booth. She cried.

"Is it true, Mom, do Obama and Hillary think it's OK for two men to marry each other?" her daughter asked. "That's what one kid said at school today and why I should vote for Trump."

Hussaini replied: "Baby, what if tomorrow someone said we can't eat meat because it's against their religious beliefs?"

Her daughter paused to process the thought before agreeing that it wouldn't be fair.

"That's right, sweet love," Hussaini said. "That's the beauty of democracy in the USA. No one's religion gets to be more important than other people's beliefs. That's called separation of church and state. And you can't pick and choose, otherwise tomorrow, someone will get to tell Mommy to take her scarf off. If two dads want to marry, we have to fight for their right to do so. We have to show up and vote."

Tuesday morning was full of hope and inspiration for the Hussaini family. But the next day, they woke up to an opposite feeling.

Like many parents, Hussaini tries not to push too many worldviews on her daughter. But on Wednesday morning after Election Day, that was simply unavoidable.

Her daughter was terrified of being kicked out of the country she was born in, with an impenetrable wall between her and her friends. She asked, in detail, questions about passports, contingencies, and travel plans and whether it was even safe for her to go school.

Hussaini did her best to explain how the government works — that there's a Constitution and three separate branches with a system of checks and balances built in to make sure no one has too much power.

She told her daughter, "We want to be positive, because as Americans, we believe in our laws and [that] people are generally good" — even though, she noted, she wasn't even sure if she believed those words herself.

But sometimes, she said, you need to believe in something, even if it's just to hearing yourself say it. Sometimes that's what it takes to get by.

"What would be helpful [now] is knowing I'm not alone," Hussaini told me. "That if hate comes out in full force that I can keep my family safe."

"I'm an American citizen, born and raised, and I don't feel safe or comfortable. I don't know when my rights are going to be infringed upon and if they will, what I am supposed to do.

I want to know that my freedom of religion is covered.

I want to know that my freedom of speech is still safe.

I want to know that America is still for me."