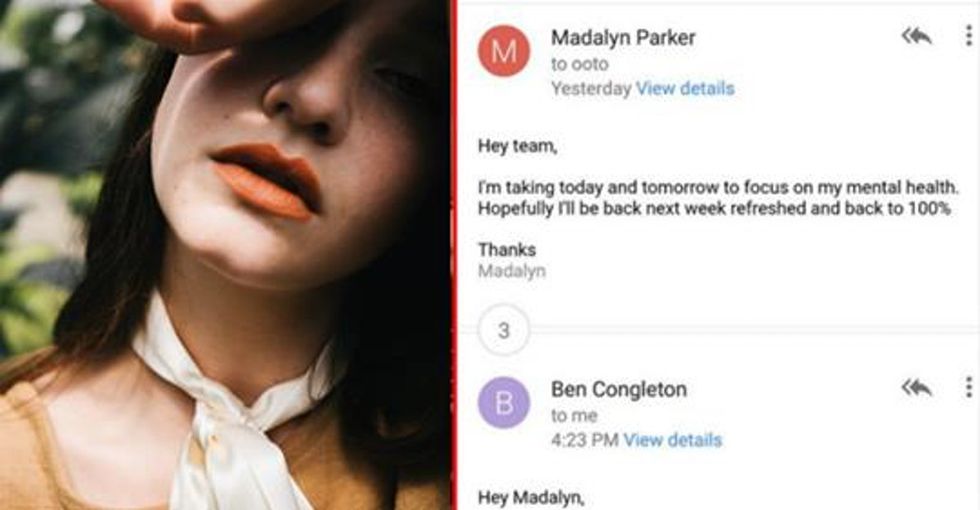 This article originally appeared on 07.11.17

Madalyn Parker wanted to take a couple days off work. She didn't have the flu, nor did she have plans to be on a beach somewhere, sipping mojitos under a palm tree.

Parker, a web developer from Michigan, wanted a few days away from work to focus on her mental health.

Parker lives with depression. And, she says, staying on top of her mental health is absolutely crucial.

"The bottom line is that mental health is health," she says over email. "My depression stops me from being productive at my job the same way a broken hand would slow me down since I wouldn't be able to type very well."

She sent an email to her colleagues, telling them the honest reason why she was taking the time off.

Soon after the message was sent, the CEO of Parker's company wrote back:

I just wanted to personally thank you for sending emails like this. Every time you do, I use it as a reminder of the importance of using sick days for mental health — I can't believe this is not standard practice at all organizations. You are an example to us all, and help cut through the stigma so we can all bring our whole selves to work."

Moved by her CEO's response, Parker posted the email exchange to Twitter.

"It's nice to see some warm, fuzzy feelings pass around the internet for once," Parker says of the response to her tweet. "I've been absolutely blown away by the magnitude though. I didn't expect so much attention!"

Even more impressive than the tweet's reach, however, were the heartfelt responses it got.

"Thanks for giving me hope that I can find a job as I am," wrote one person, who opened up about living with panic attacks. "That is bloody incredible," chimed in another. "What a fantastic CEO you have."

Some users, however, questioned why there needs to be a difference between vacation time and sick days; after all, one asked, aren't vacations intended to improve our mental well-being?

That ignores an important distinction, Parker said — both in how we perceive sick days and vacation days and in how that time away from work is actually being spent.

"I took an entire month off to do partial hospitalization last summer and that was sick leave," she wrote back. "I still felt like I could use vacation time because I didn't use it and it's a separate concept."

Many users were astounded that a CEO would be that understanding of an employee's mental health needs.

They were even more surprised that the CEO thanked her for sharing her personal experience with caring for her mental health.

After all, there's still a great amount of stigma associated with mental illness in the workplace, which keeps many of us from speaking up to our colleagues when we need help or need a break to focus on ourselves. We fear being seen as "weak" or less committed to our work. We might even fear losing our job.

Ben Congleton, the CEO of Parker's company, Olark, even joined the conversation himself.

In a blog post on Medium, Congleton wrote about the need for more business leaders to prioritize paid sick leave, fight to curb the stigma surrounding mental illness in the workplace, and see their employees as people first.

"It's 2017. We are in a knowledge economy. Our jobs require us to execute at peak mental performance," Congleton wrote. "When an athlete is injured, they sit on the bench and recover. Let's get rid of the idea that somehow the brain is different."