13 things couples who disagree politically know to be true. 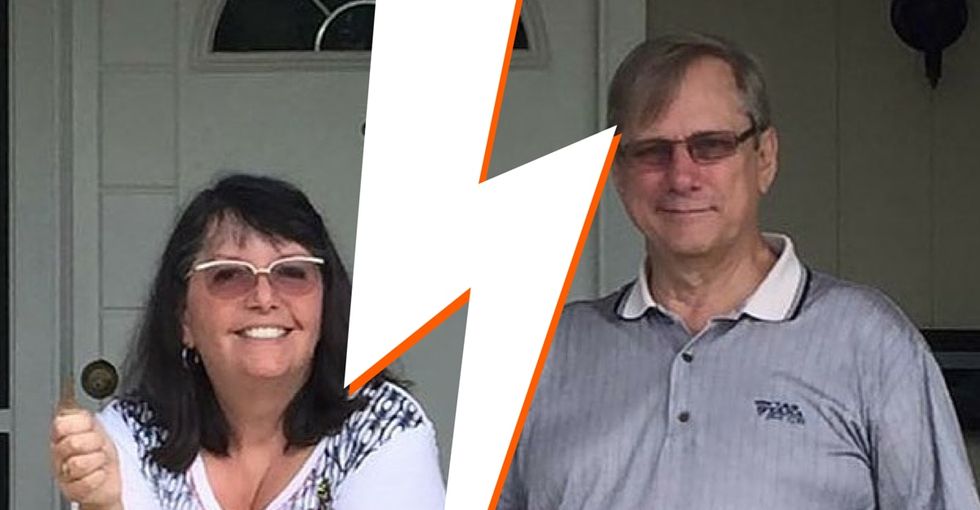 Before the 2016 presidential election season began, most American relationships looked like this.

Ah, to be in love. Photo via iStock.

Now, after nearly a year of wall-to-wall, 24/7 politics, here's what many of those same relationships look like:

Yes, since the race for the White House kicked off in earnest, far too many romantic partnerships have gone down in flames — over an ill-timed assertion that Donald Trump actually has some good ideas; that Hillary Clinton is an evil, conniving, tax-and-spend liberal, corporate shill, crypto-conservative, secret socialist, liar, unredeemable she-demon whose one facial expression that one time disqualifies her from the presidency; or that John Kasich is strangely attractive in a median dad kind of way.

But it doesn't have to be that way!

Even if you're the world's biggest Ted Cruz booster and your significant other is the last remaining Martin O'Malley holdout, take heart! You can still make it work!

How do I know? There are couples all over this country doing it right now.

And I talked to some of them:

Here are 13 of their secret tips for navigating a relationship with a partner who is so clearly, obviously, totally, 100% wrong about everything:

Longtime Obama supporter Kristi Tollefson-Taft told Upworthy that she used to chafe at her husband Rick's libertarian-conservative opinions until they both realized they'd rather listen to each other than the scream-ier voices from their respective parties.

"The loudest are the extremes from both sides. We talk about that a lot," Kristi said.

"I can disagree with somebody’s policy without taking it to the level of hate," Bob Miller told Upworthy. He, a longtime Republican, and his wife Marilyn, a Bernie Sanders supporter, almost never fight about politics despite differing on plenty of big issues.

The secret? They banned the word "hate" from their Tampa, Florida-area home — and aren't too proud to resort to bribery to enforce the embargo.

"My mother would often say, ‘I hate that actor’ or ‘I hate that ... anything,'" Marilyn said. "And Bob would say, ‘Jane, every time you say “hate,” I’m gonna charge you a quarter because we just don’t like the word.’ And so my mother started saying, ‘I strongly dislike…’ We did get her to stop using the word hate!"

3. Recognize that not agreeing on everything can actually be kind of fun and interesting sometimes.

No opinions lightly held among meerkats. Photo by Wensbos/Pixabay.

While the Millers debated the pros and cons of Obamacare along with the rest of the country, they never really came to a consensus — and they prefer it that way.

"How we actually resolved it is: We don’t resolve it," Marilyn said. She explained that not always seeing eye-to-eye has been a positive force in their relationship.

"I read a quote years ago. Years and years ago. Maybe 30 years ago. And I had it on my refrigerator forever, and it says, ‘If two people always agree, one of them isn’t thinking.’ And I love it," Marilyn said.

4. Designate a "politics-free zone" in your house. Even if it's the whole house.

That's what Pam and Bill Atkinson of Bloomington, Illinois, did — initially so they could have their (mostly Democrat-leaning) friends over without everyone going home angry.

"They don’t want to hear me be correct so much, being a Republican," Bill, a Donald Trump supporter, joked to Upworthy.

Pretty soon, the couple, who, according to Pam, disagree on "most everything," realized it was a good rule to abide by all the time. So they designated their whole house a "politics-free zone."

5. If you do wind up debating each other, have a sense of humor about it.

Not liking to argue, however, doesn't prevent the Atkinsons from, well ... arguing. No more than 90 seconds into our conversation, the couple started going back and forth about the economic impact of a local prison.

"See! This is how it starts, and then it just goes downhill from there," Pam said, laughing.

Everyone seemed delighted, and no one's feelings appeared hurt. Sense of humor? Check.

6. On election nights, do something besides watch the news.

Contrary to popular belief, there is no law requiring couples to stay home every Tuesday during primary season staring at their 24-hour news network of choice while making snide comments under their breath at one another.

Lucky for the Atkinsons, they realized this early on and decided it wasn't healthy for their relationship.

“Instead of staying home [on Super Tuesday] and watching the news or watching something, we’re gonna go to the Normal Theater to go see ‘The Quiet Man,'" Bill said.

7. You don't need to tell each other who you're voting for.

Not only do Pam and Bill Atkinson rarely talk politics at home, but Pam has resolved to never, ever tell Bill who she's voting for.

It's so important to her that she would not reveal her choice for this article — even after Bill offered to leave the room.

"She never tells me. Even when it comes to presidential elections, she won’t tell me!" Bill said.

8. If you have to tease each other, make sure it's actually loving, not pretend-loving-but-actually-snarky.

"THIS IS HOW I EXPRESS MY AFFECTION DO YOU LOVE IT?!" Photo via iStock.

"The only thing I’ve said, and I posted it on Facebook, was that I used my vote to cancel out his," Pam said, laughing again.

9. Frame your political discussions as something you do together as a couple.

The Tafts said they try hard not to impose their own beliefs on their children and prefer to teach them to think and talk critically about politics — and to always question their own biases.

"It became very clear that we need to tell them that there are numerous opinions on subjects and they should have, in their toolbox, ways to make their own judgments," Kristi said.

10. Make sure to remind yourself that your partner's politics are not necessarily the most important aspect of who they are.

"My first marriage, I was married to somebody who talking politics [with] was like preaching to the choir, and that marriage didn’t last," Pam Atkinson recalled. "So I came to the realization that politics is not the end-all, be-all of a relationship."

It's a sentiment all the couples I spoke to shared.

“If you talk about a relationship, if the only thing you disagree on is politics, I’d say...” Bob Miller began.

11. If the relationship can't work because your politics are too different, there's no shame in that.

Rachelle Brady, a Bernie Sanders supporter, told Upworthy she was shocked when she found out her boyfriend was planning to vote for Donald Trump but that trying to change his views, ultimately, did more harm than good to the relationship.

"What that did was prevent me from actually loving him where he was as a person without trying to impose my expectations on him," Brady said.

She and her boyfriend eventually called it quits over what Brady described as a conflict of values. Brady believes ending things freed her to not only "live what she believes in," but to engage her ex in a more open and honest way.

"That type of perspective has made it possible for us to move forward in our relationship. So, it changed form, but we still have a relationship," Brady said.

12. Always assume your partner has good intentions, even if their opinions make you want to scream out an open window.

"I know you're just batting my face incessantly because you care, not because you want to scratch my eyeballs out." Photo by Prskavka/Wikimedia Commons.

The trick to a healthy political argument in a relationship, according to the Tafts, is always assuming your partner is coming from a good place no matter how much you might want to handcuff them to a chair and force them to watch Rachel Maddow (or Bill O'Reilly) until they get it, dammit.

"The secret sauce, in my mind, is recognizing and respecting that we can be different and not sitting in judgment of that difference," Rick Taft said.

13. Most importantly, never lose sight of what really matters most.

Photo by Bill and Pam Atkinson, used with permission.

"Our relationship is built on much more than our political point of view," Bob Miller said. Marilyn added: "It’s respect for each other, and it’s love."

"The fact that [Bill's] wrong in his political beliefs doesn’t make me love him any less," Pam Atkinson said.

If all else fails, just remember that in only eight months' time, you won't be arguing about politics anymore.

You'll be arguing about whether to buy a house in Canada instead.