No big deal or anything. There's a whole hidden network in your body that scientists JUST discovered.

This is big. HUGE. Especially for autoimmune and neurological disease sufferers. 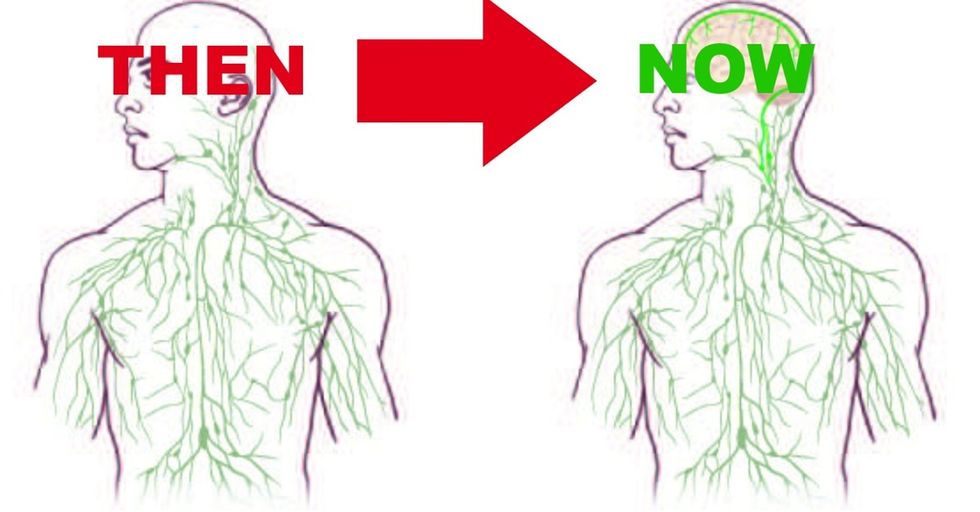 You thought human anatomy was pretty well figured out by now, right?

That whole Gray's Anatomy thing has been around quite a while (the medical reference book, not the show, silly).

You'd be wrong. We all were.

Scientists just discovered there are vessels connecting our brains to our lymphatic systems.

Your brain and your immune system have been secretly in cahoots your whole life.

It's such a big deal that one researcher said (probably while his jaw was on the floor), "They'll have to change the textbooks."

It might change everything for sufferers of autoimmune and neurological diseases.

Map of the lymphatic system: traditional (left) and as redrawn by the University of Virginia's discovery.

"I really did not believe there are structures in the body that we are not aware of. I thought the body was mapped. ... I thought that these discoveries ended somewhere around the middle of the last century. But apparently they have not."
— Jonathan Kipnis, Ph.D., UVA researcher

Since 20% of the U.S. population suffers from autoimmune diseases and as of 2012 an estimated 5.4 million people are afflicted with Alzheimer's disease, this discovery could have ripple effects and ultimately change the quality of life for many.

How can this change the game? There are so many possibilities — both known and unknown.

Here's one example: In Alzheimer's disease patients, doctors know that one of the factors present in afflicted brains is an accumulation of protein chunks. The lymphatic connection could present a potential cause — for instance, if they find that vessels in healthy brains are disposing of that protein properly but the vessels in afflicted brains aren't. It's a new place that researchers can begin looking, and it means they might be that much closer to figuring out Alzheimer's disease — and, who knows, even a cure?

Overall, it means that instead of approaching the immuno-neurology connection like it's some sort of mystical voodoo...

...doctors can start coming at it mechanistically.

And that is a step in the right direction.