I wrote a news headline that didn't even link to a story. Over 2,000 people commented on it anyway. 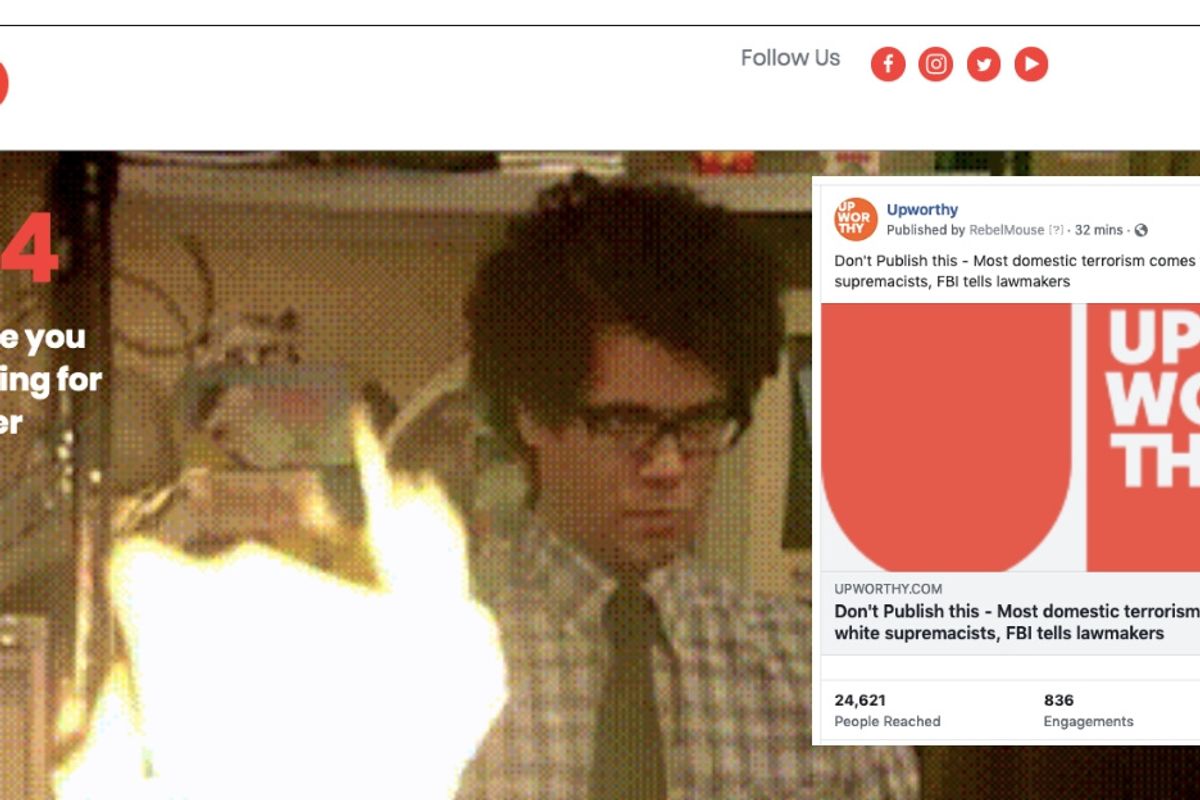 I've written for the fine people of the internet for more than a decade. At this point, you'd think nothing would surprise me.

I mean, I've had private messages sent to my personal inboxes that would make a sailor blush. I've had people write jaw-dropping screeds in response to articles I've written that shouldn't even have been controversial. I've watched comment sections turn into mob-like madness and have been called every unsavory name in the book.

Sometimes I think I've seen it all—and then something like this happens.

Last Thursday, Upworthy published an article I wrote with the headline, "Most domestic terrorism comes from white supremacists, FBI director tells lawmakers." The article includes links to sources for the facts, a video of Wray's testimony, information about what the current administration is/isn't doing about domestic terrorism, and some commentary and questions to get people thinking and talking.

When the article first went up on Upworthy's Facebook page on Thursday, it got more than a thousand shares and sparked hundreds of comments.

It was a pretty standard response for a piece like that.

But then this happened:

The article was shared again over the weekend, only this time there was a glitch. At first, here's what showed up on Facebook:

I have no idea why it says "Don't Publish this" or why there's no image. Someone was probably testing something behind the scenes and accidentally scheduled it to publish. And there was no article linked. If people clicked on the post, it went straight to this error page:

People shared and commented on the Facebook post anyway, which I thought was weird. But it got caught fairly quickly and taken down.

Later in the weekend, however, another share of the article went up, this time with the correct headline, image, and share text. Still no link to the article, though. Anyone who clicked was taken straight to that same 404 error page.

Guess how many shares and comments that post got before Upworthy got wind of the dead link and took it down.

More than 2,000 comments. And thousands of shares to other people's Facebook feeds.

Again, there was no article to read. When I saw the Facebook share and started reading the comments, I was baffled. Only about 2% of the comments were people saying "There's a dead link," or "Link isn't working." Two in a hundred. No exaggeration.

Everyone else was reacting only to the headline. Full on debates raged. People claimed that Upworthy was publishing lies or writing articles that were just designed to divide people.

None of these commenters had any idea what they were talking about because THERE. WAS. NO. ARTICLE.

I often find myself dismayed by people who obviously comment without reading the article. (I wrote a whole article once about why people need to stop that nasty habit.) But I've never seen such a blatant example of how common this is. It was like an unintentional sociological experiment that thousands of people failed.

There could have been anything at that link—I could have made stuff up out of thin air, I could have linked to actual fake news sites, I could have brazenly misquoted someone—except Upworthy has standards, thank goodness. Maybe I should feel happy that the people who shared it felt like they could trust the outlet I wrote for, but I'm super uneasy with that. No one should be sharing something they haven't read, no matter who publishes it.

And there's one more element to this that deserves a word: How headlines get crafted.

I'm guessing the reason people didn't bother clicking that link is because the headline was clear and descriptive and neatly summed up the story at a basic level.

The headline gave no details or proof, of course. Nevermind the fact that the article points out an important differentiation between domestic terrorism and homegrown violent extremist terrorism. Nevermind the fact that the article makes clear that white supremacist violence is nothing new. (Sooo many commenters felt the need to point that out.) Nevermind the fact that this administration has slashed programs designed to counter white supremacist violence despite its own intelligence agencies' warnings. All of those things add important context to the story, but the headline is so clear that people don't even know what information they're missing.

Aye, and here's the rub: What would get people clicking and reading is a less clear headline—maybe something like "FBI director tells lawmakers that most domestic terrorists come from a specific group of Americans." But you know what we'd be accused of then? Clickbait. People would complain that we were being vague on purpose, just for clicks. Facebook would ding us and squash our reach because its almighty algorithm would determine that—heaven forbid—we want people to actually click on our content and read it.

I just want a t-shirt, a banner, a billboard, and a meme that says, "READ THE DAMN ARTICLE, PEOPLE." I also request a parrot that repeats that same phrase all day long. That's literally all I want right now.