Jon Stewart is now, and has always been, a class act! 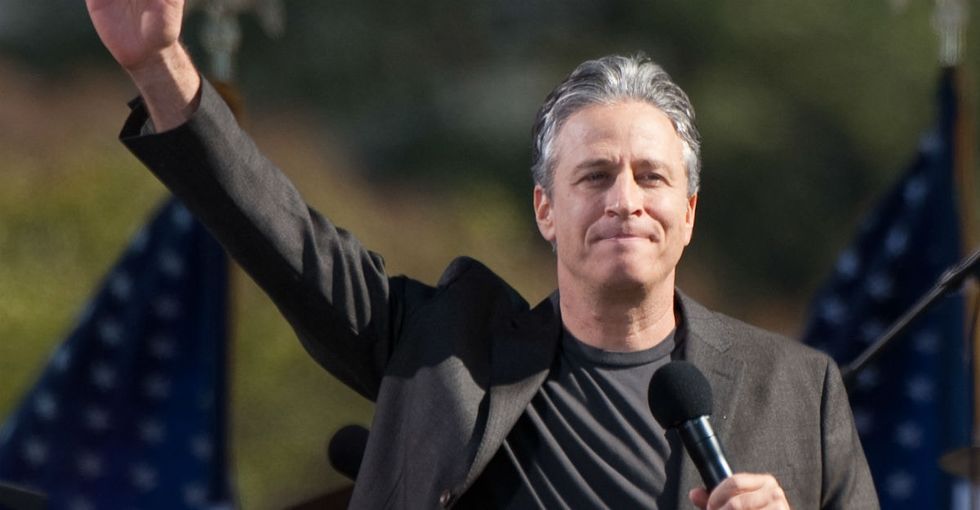 This article originally appeared on 10.28.15

Anna and Maybelle are living in a pig's paradise.

GIF via The Daily Squeal/Facebook.

They feast on green grass. They sunbathe on 12 acres of pristine pasture. And they get belly rubs...

...from Jon Stewart and his wife, Tracey. Every. Single. Day.

Anna and Maybelle are just two of about a dozen other animals living in the lap of luxury on the Stewarts' farm 50 miles outside of New York City, "CBS This Morning" reported.

The former "Daily Show" host and his wife, who is an author and animal advocate, have run Bufflehead Farm in New Jersey since 2013, according to The New York Times. Along with Anna and Maybelle, they care for four dogs, three rabbits, two guinea pigs, two fish, and a bird.

And while that might seem like a full house (er, yard), the Stewarts are just getting started.

Jon and Tracey's large, furry family is about to get even bigger.

On Oct. 24, 2015, the couple announced that their property will officially become a Farm Sanctuary.

Farm Sanctuary, an advocacy group that fights the factory farm industry and cares for abused animals, has three other animal safe havens in the U.S.; the Stewarts' New Jersey property will be its fourth.

Tracey, who has a newly released animal welfare book called "Do Unto Animals," announced the big news at the nonprofit's gala in New York City this past weekend.

"We bought a farm in New Jersey with the intention of starting a farm sanctuary of our own with an educational center, but what I'm announcing tonight is that our farm is actually going to be the New Jersey branch of Farm Sanctuary. We're going to build new advocates, new curious learners, and new leaders for this very important movement." — Tracey Stewart

Caring for rescued animals is quite the 180 from Jon's previous day job as host of "The Daily Show."

But for Jon — who called himself his wife's "wingman" during this next chapter and who has quietly eased into eating a vegetarian diet — farm life doesn't seem so bad ... although he joked about missing the perks of TV stardom during his recent Emmy speech.

"To everybody on television, I just want to tell you — cling to it!" he joked on stage last month after "The Daily Show" won Best Variety Talk Series at the award show.

"I have been off of television for six weeks, seven weeks, whatever it is. This is the first applause I've heard. It is a barren wasteland out there." He told the Emmy's audience. "You get used to craft services. Out in the world, there are tables with food — but you can't take it. It costs money, and very little of it is gluten free or vegan."

The comedian, however, seems perfectly at peace — in hog heaven, if you will — right where he is.

Although pig masseur and late night host may seem dramatically different, it appears that Jon is still doing what he does best in retirement: helping give a voice to the people — and animals — that deserve to be heard.

Check out the story from "CBS This Morning" on Jon and Tracey's big news below: