How 5 diabolical parents called their kids' bluff in hilarious ways

The next generation is in great, if diabolical, hands. 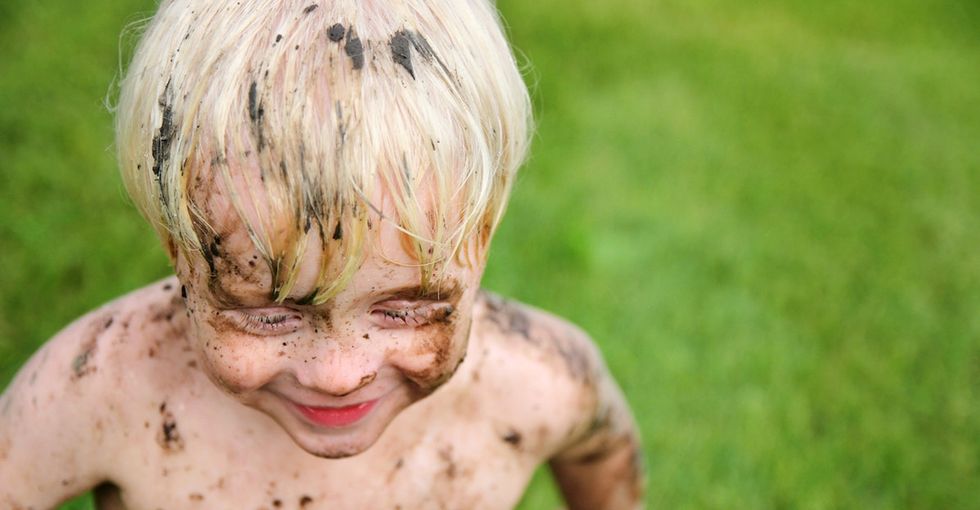 Recently, blogger Jen Hatmaker had a funny conversation with a friend about parenting:

"My girlfriend told me the greatest story. Apparently her 11-year-old also wanted to be a grown up this week and, in fact, not only did he treat his siblings like despised underlings, but when asked what he wanted, he said: 'I want the authority to be in charge of them and tell them what to do, because they deserve it!'

Well. My girlfriend and her husband are NOT AT ALL MESSING AROUND with parenting. Calmly, evenly, they granted his request to be a grown-up for a week by pulling him out of camp (the underlings still got to go, because they are 'such children') and sending him to work ALL DAY EVERY DAY with his dad. He has to get up early and shower and make breakfast for everyone. He has to kiss the underlings before he goes to work and tell them to have a great day and that he loves them. He has to work on a typing project during his office hours. He only gets to eat what his dad eats, because eating like a grown-up is not nearly as fun as eating like a kid.

Want to be an adult? Fine."

Hatmaker's post went viral, with thousands of parents chiming in with their own stories of tough love, both giving and receiving.

The responses were hilarious, poignant, and a sign that the next generation is being parented by extremely capable, if not a little bit diabolical, hands.

Here are five of my favorite stories from the comments about parenting-gone-absolutely-right:

"My sister was snotty to my Mom. She called her and pretty much demanded, 'Bring my band uniform to the high school!' She's the one who forgot her uniform in the first place. Then she told my Mom 'Do not come in the school, that would be so EMBARRASSING. Just wait for me by my car.'

So my Mom did just that. She stood by my sister's car, in the Texas heat, WEARING my sister's band uniform. All the kids walking out for the day saw it.

2. Jessica Klick got her sons new shoes ... but not the ones they wanted.

"Our 11 and 12 year olds at the time were complaining and whining and being ungrateful, saying how 'hard their life was.' For boys, the big thing is wearing those cool Steph Curry shoes and our boys LOVE their Currys!

So after hearing the last complaint my husband went to Walmart to buy white maypop leather shoes (the kind you see in geriatric centers) and high white socks. He brought those bad boys home, set them on the boys' dresser, and made them wear those things everywhere we went. Those devastated boys told us we were 'ruining their lives.'

I may or may not have laughed like a little girl when I dropped them off at school and watched them do the walk of shame."

3. Marisa Rodriguez Byers says she wished her mother was dead. And boy, did she regret it.

She completely ignored me, didn't speak at me, didn't look at me, wouldn't cook for me, set my place at the table, wash my clothes, take me to school, NOTHING. After 8 days, I broke down in the middle of the night, went to her room, clutched her tightly while sobbing how sorry I was and how much I loved her and that I would NEVER say those words again. I'm 41 years old now, I have NEVER uttered those words or anything remotely like them after that incident."

After tough love, you gotta hug it out.

4. Jessica Hill gave her daughter a good scare — and, in turn, a new appreciation.

"I was grocery shopping with my three year old when she decided to start screaming for ice cream. There was no reasoning with her in this hulk-type rage. I swear she had super human strength as I struggled to get her out of the cart full of groceries.

I was completely unaware of the two police officers who were witnessing this wrestling match. She was still hitting, kicking, and screaming when I was stopped by the police officers in the parking lot. They thought I had abducted her. This happened long before we had smart phones full of our children's photos. They tried questioning her but she was still too busy throwing a fit, so I handed her over. I told them she could ride with them because I really needed a break and they could follow me home to see her birth certificate, baby book, etc. They started chuckling as one officer said, 'Spoken like a true mom!' I think they were more relieved than I was when she finally cried out, 'Mommy?'

The officer handed her back to me while the other went back inside the store to ensure there wasn't a distraught mother looking for her missing toddler. That evening my daughter told her dad she almost went to jail because she threw a fit, and I let her believe it. She didn't throw a fit in public again.

I didn't mean to scare her, so after this experience, I wanted to ensure my daughter had a healthy respect and appreciation for first responders. Today, I'm happy to say she is highly aware and appreciative of the police, firemen, paramedics, and military personnel who serve to protect her. "

5. Erica Goodnight taught her son an incredible lesson that he carries to this day.

"My kid was whining over not having anything to play with. So, without a word, I went to the garage and got a black 50 gallon trash bag and started putting in all the toys that he obviously didn't even realize were in our home to play with.

I loaded them AND him into the car and we drove to our local homeless shelter and gave every. single. toy. in the bag away. To a child who TRULY had nothing. And you know what? He didn't even cry. His eyes were opened to the ones who have nothing. He actually enlarged his heart that day. And, we still do it. We still take toys to kids with nothing at least once a year.

There's a fine line between teaching your kids a tough lesson in a funny way and engaging in "humiliation parenting."

Making children wear a sign that says, "I sneak boys in at 3 a.m. and disrespect my parents and grandparents" or otherwise berating them publicly is a good way to erode trust between the two of you and seriously damage your relationship.

But calling their bluff on a ridiculous demand? Or having a little fun with how you choose to correct their bad attitude? That's just plain survival.

And that's what parenting is really all about.

You can read the whole hilarious exchange over on Facebook.

In the meantime, what's your favorite tough-love story?