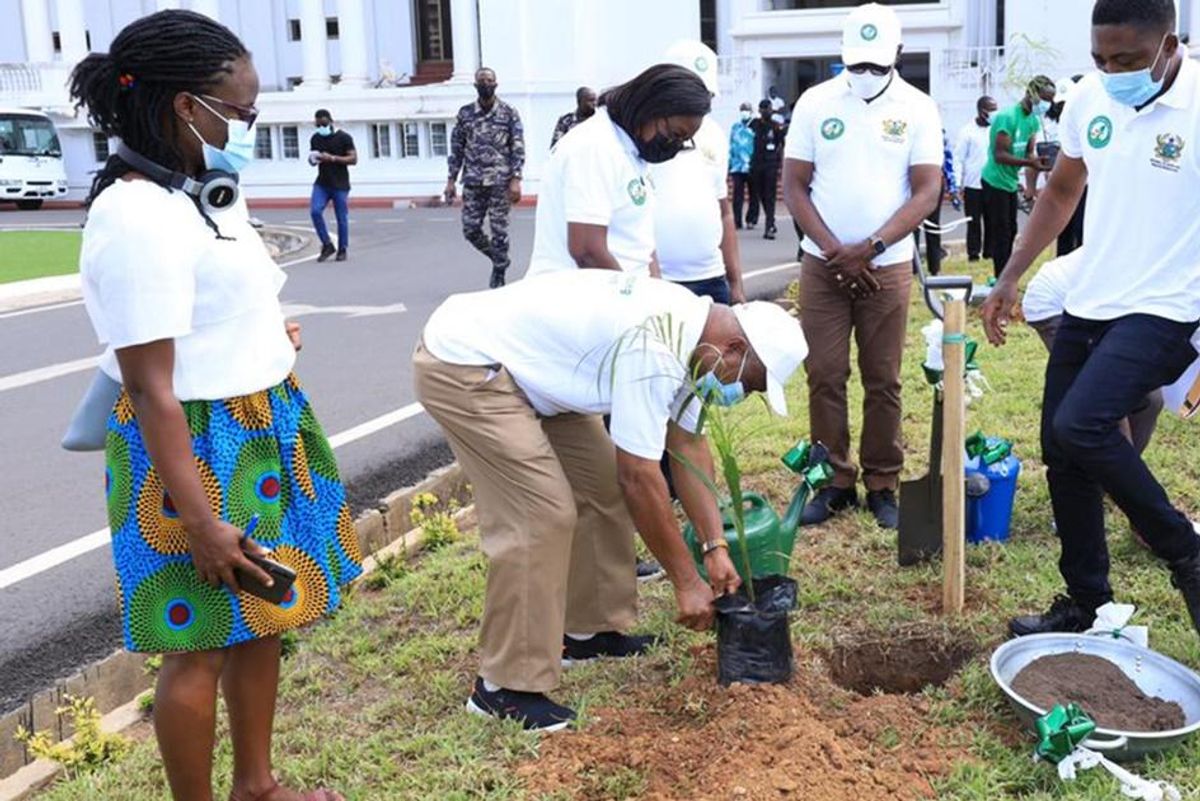 via Ministry of Lands and Natural Resources-Ghana

Ghana kicked off an ambitious new program on Friday that its leaders hope will reverse over a century of significant deforestation and climate change. On June 11, the country celebrated its first Green Ghana Day by planting somewhere near five million trees.

"The exploitation of forest resources for national development has not been sustainable over the years," President Akufo-Addo said in a speech marking the country's inaugural Green Ghana Day.

"We don't have tomorrow or the day after tomorrow to do this. We have to act now," he added.

Ghana's current forest cover stands at 1.6 million hectares, down from 8.2 million in 1900, according to statistics from the Ministry of Lands and Natural Resources. Much of the West African country's forests have been degraded by small-scale illegal gold miners and the indiscriminate chopping of trees without reforestation.

The Forestry Commission mapped out places for people to start planting, including backyards, school compounds, residences, and roadside areas.

According to Sector Minister Samuel Abu Jinapor, the Forestry Commission sent six million seedlings to the country's 16 regions. He says that the first Green Ghana Day is the beginning of a long-term commitment to repairing the country's ecosystem.

The campaign brought together people from all walks of life, enlisting the help of corporations, schools, faith-based organizations, the media, celebrities, and political parties.

The Forest Commission created videos on social media to teach people how to plant their seedlings.

"So the Green Ghana Project is national in character and aimed at awakening national consciousness for everyone to plant a tree at his/her backyards, open spaces, school compounds, 100 meters from a road, among other places, and should be a collective efforts by all," the Minister emphasized.

"We've had similar projects in the past. Once the trees were planted everybody goes their way and they end up dying. This time we'll make it an annual affair," Hugh Brown from the Forest Commission told The South African.

By noon on Friday, nearly 2.7 million of the targeted five million seedlings had been planted, Ghana's forestry commission wrote on Facebook.

U.S. Ambassador to Ghana Stephanie S. Sullivan commemorated Green Ghana Day by planting a Lignum Vitae tree in the U.S. Embassy grounds. The tree is known in Ghana as the "Tree of life" for its medicinal properties.

"Prompt reforestation is critical," Sullivan said in a statement. "The goal of 5 million trees set by the Government of Ghana is an ambitious but necessary one, so we must all do our part, one tree, or many at a time. I strongly encourage Ghanaians to embark on restoring Ghana's forest cover, repair degraded landscapes, and protect water bodies."