Check out this video of Gal Gadot meeting a teary-eyed Wonder Woman fan.

Gadot came through big time for a young fan. 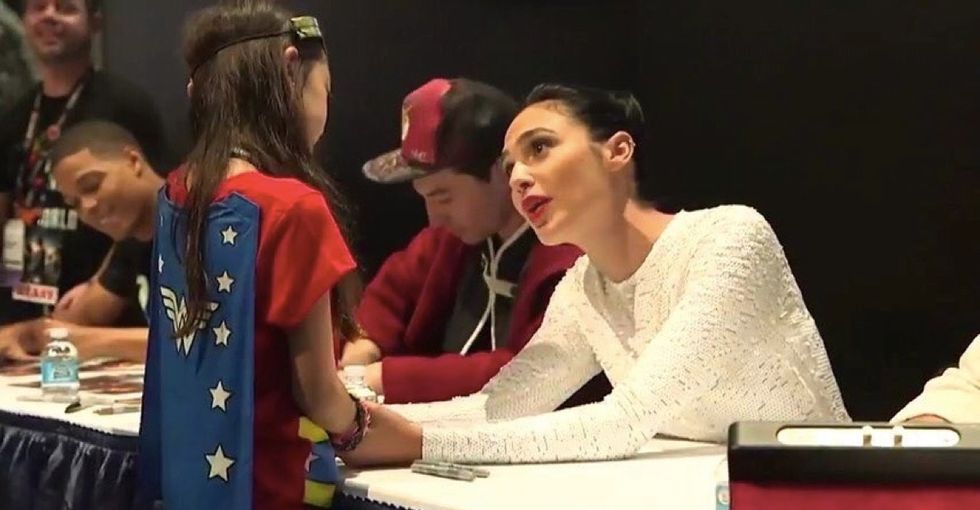 Wonder Woman came to the rescue of a young fan at Comic-​Con — and honestly, it just got a little dusty in here. I'm cryin'.

A young girl, dressed as Wonder Woman, approached Gal Gadot in tears during a meet and greet with the "Justice League" cast. According to the girl's mom, children's author Christine Keller, the girl was so overcome with joy that she couldn't stop crying.

.@GalGadot shared a moment with a young Wonder Woman cosplayer while signing autographs with the Justice League at… https://t.co/4ZKxtplcBW
— Variety (@Variety) 1500766588.0

"There’s no reason to cry," Gadot can be heard telling the young fan in a video of the encounter, captured by Variety. "Here we are together."

"Your ability to cry is what makes you such a warrior," Ezra Miller, one of Gadot's "Justice League" co-stars chimed in. "Come join the Justice League whenever you get ready."

"These characters matter and can have a huge influence on young people," wrote Keller on her Facebook page. She's not alone in thinking that, either.

"What a great role model and genuine, nice person. My daughter will always remember this moment for the rest of her life. Thank you, Gal Gadot!"

Back in June, "Wonder Woman" director Patty Jenkins shared some awesome feedback she received from a kindergarten teacher.

Around the time of the film's release, actress Viola Davis posted a photo of her daughter dressed as the iconic character and has talked about how Wonder Woman helped inspire her to be brave and stand up to bullies when she was growing up.

Boys have plenty of iconic heroes they can see themselves in on the big screen: Batman, Superman, Spider-Man, 12 different iterations of The Doctor on "Doctor Who," and on and on. That's why when an awesomely badass character like Wonder Woman gets a chance (and absolutely nails it, by the way), it's worth taking note.

There's even more good news for Wonder Woman fans: In addition to the upcoming "Justice League" movie, Warner Bros. confirmed that there's going to be a "Wonder Woman" sequel.