15 hilarious parenting comics that are almost too real 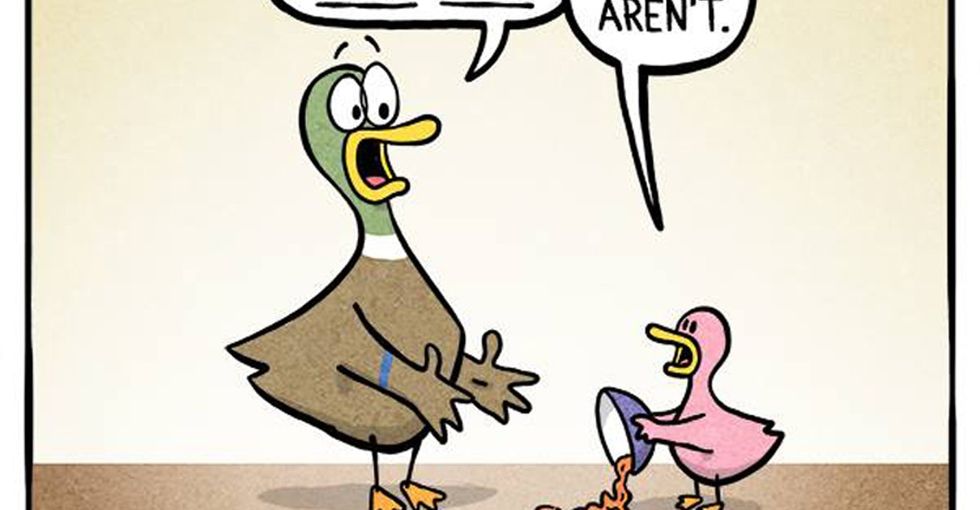 This article originally appeared on 07.11.16

Brian Gordon is a cartoonist. He's also a dad, which means he's got plenty of inspiration for the parenting comics he creates for his website, Fowl Language (not all of which actually feature profanity).

He covers many topics, but it's his hilarious parenting comics that are resonating with parents everywhere.

"My comics are largely autobiographical," Gordon tells me. "I've got two kids who are 4 and 7, and often, what I'm writing happened as recently as that very same day."

Gordon shared 15 of his oh-so-real comics with us. They're all funny 'cause they're true.

Let's get started with his favorite, "Welcome to Parenting," which Gordon says sums up his comics pretty well. "Parenting can be such tedious drudgery," he says, "but if it wasn't also so incredibly rewarding there wouldn't be nearly so many people on the planet."

I hope you enjoy these as much as I did.

All comics are shared here with Gordon's express permission. These comics are all posted on his website, in addition to his Facebook page. You can also find a "bonus" comic that goes with each one by clicking the "bonus" link. Original. Bonus.

I love Gordon's comics so much because they're just about the reality of parenting — and they capture it perfectly.

There's no parenting advice, no judgment, just some humor about the common day-to-day realities that we all share.

When I ask him about the worst parenting advice he's ever received, Gordon relays this anecdote:

"I remember being an absolute sleep-deprived wreck, sitting outside a sandwich shop, wolfing down my lunch quickly beside my 1-month-old son, who was briefly resting his lungs between screaming fits.

A rather nosy woman walked up to me and said, all smugly, 'You should enjoy this time while they're easy.' It was the exact worst thing anyone could have said to me in that moment and I just wanted to curl up on the sidewalk and cry."

Who hasn't been on the receiving end of totally unneeded and unwanted advice? That's why Gordon's comics are so welcome: They offer up a space for us to all laugh about the common experiences we parents share.

Here's to Gordon for helping us chuckle (through the tears).

From Your Site Articles
Related Articles Around the Web
comedy
Education

The school assignment was intended to spark debate and discussion — but isn't that part of the problem?

A school assignment asked for 3 "good" reasons for slavery.

Mom gets savvy and tells her daughter to defrost dinner via Roblox.

Parents have been contending with kids and video games since the first arcade game was introduced. Kids get immersed in the fictional world and forget—or sometimes downright ignore—that there are responsibilities to take care of outside of the game. A mom from Chicago, ChaCha Watson, used the Roblox video game to get her daughter's full attention.

Watson repeatedly called her 11-year-old daughter, Miracle, to tell her to take dinner out of the freezer to defrost but Miracle didn't answer. Instead of jumping to the worst-case scenario, Watson knew exactly what her daughter was up to and how to get her attention.

Miracle was immersed in the video game Roblox instead of answering her mom's phone calls, so Watson decided to join. Yep, the savvy mom hopped into the Roblox game from her location and jumped into the car with her daughter's avatar to tell her to take the lasagna out of the freezer. She shared the screenshots of the exchange on Facebook where it went viral.

A mom was frustrated that there weren't shows for kids with developmental delays. So, she made one herself.

Ms. Rachel has taken the internet by storm with her show geared toward educating parents and toddlers.

Mom couldn't find a show for children with developmental delays.

If there's one thing a determined parent will do, it's make sure their kid is getting their needs met. Even if that means they have to reinvent the wheel to do it. Rachel Griffin Accurso, or as parents across TikTok and YouTube know her, Ms. Rachel, found herself without any real options for additional resources to help her toddler who was diagnosed with a speech delay.

Accurso was looking for a developmentally appropriate show for her son but she wasn't having any luck. That's when she decided to take her teaching degree and get to work on creating her own show. It became a family business when she teamed up with her husband, Broadway composer Aron Accurso, who has been there every step of the way. He's even in the episodes singing along.

"Songs for Littles" has infiltrated homes across America. If you have a toddler and internet access, you've likely heard of it. The show has more than a billion views on YouTube. Yes, that's billion, with a "B." Ms. Rachel also has more than 19 million likes on TikTok and has speech pathologists everywhere singing her praises.

Keep ReadingShow less
ms. rachel
Get stories worth sharing delivered to your inbox
By signing up you agree to Upworthy's privacy policy.
Pop Culture

Her reaction to the music cue was immediate, authoritative and hilarious.

Michelle Yeoh has been acting in films for 40 years.

Michelle Yeoh won the award for Best Actress in a Comedy at the 2023 Golden Globes for her leading role as Evelyn Wang in the acclaimed film "Everything Everywhere All at Once." It was a moment the actress had been waiting 40 years to have, and she wasn't about to let anyone rush her through it.

Yeoh, 60, has been acting in action films in Hong Kong since the 1980s and in the U.S. since the late '90s, kicking martial arts butt alongside the likes of Jet Li, Jackie Chan and Pierce Brosnan's 007. With major roles in "Crouching Tiger, Hidden Dragon," "Memoirs of a Geisha" and "Crazy Rich Asians," among other films, she's become a well-recognized face to any regular filmgoer. But until "Everything Everywhere All at Once," she had never played the lead role in a Hollywood film.

Winning the Golden Globe for Best Actress in a Comedy was Yeoh's moment to revel in her success after decades of uphill battles as an Asian actress in an industry filled with underrepresentation and misrepresentation. So when the music cue indicated she needed to wrap up her acceptance speech at the two-minute mark, she simply wasn't having it.

Jason Derulo was asked to do an opera version of 'Baby Got Back.' He totally nailed it.

You've never heard the Sir Mix-a-Lot classic quite like this.

Is there anything more fun than epic remixes of classic bops? No there isn’t.

This universal law gets magnified when two seemingly antithetical styles get blended together. Like, say … I don’t know … maybe '90s hip-hop with opera.

For the BBC version of the musical game show “That’s My Jam,” singer Jason Derulo was promised something that was gonna “test his range as a musician” in front of millions of people, and the show delivered.

Derulo is widely known for his pop singles “Whatcha Say” and “Talk Dirty”—not to mention singing his own name in multiple songs—so getting assigned to perform Sir Mix-a-Lot’s “Baby Got Back” might not initially seem like much of a stretch.

But then, he was tasked with singing it in the style of musical theater. “With a little opera thrown in there,” quipped musical director Adam Blackstone.
Keep ReadingShow less
video
Pop Culture

She was totally chill about it, too.

There was a massive jump in credit card fraud in America in 2021 due to the pandemic. According to CNET, fraud involving credit cards jumped 69% from 2020 to 2021, affecting 13 million Americans and costing $9 billion.

In a world where online transactions are part of everyday life, it’s hard to completely protect your information. But, by staying vigilant and monitoring your accounts you can report fraud before it gets out of hand.

A TikTok user by the name of Lauren (@absolutelylauren) from San Diego, California, got a notification that there was a $135 charge on her card at Olaplex’s online store that she hadn’t made. Olaplex sells products that repair excessively damaged hair. Before reporting the charge to her credit card company she asked her family members if they used her card by mistake.

“I don’t wanna shut my card down if it’s just my mom ordering some shampoo,” Lauren said in the video. “Definitely not my two younger brothers, they’ve got good hair but they don’t color it.”