We don't have a gun problem. Americans are just super extra evil, crazy, and stupid. 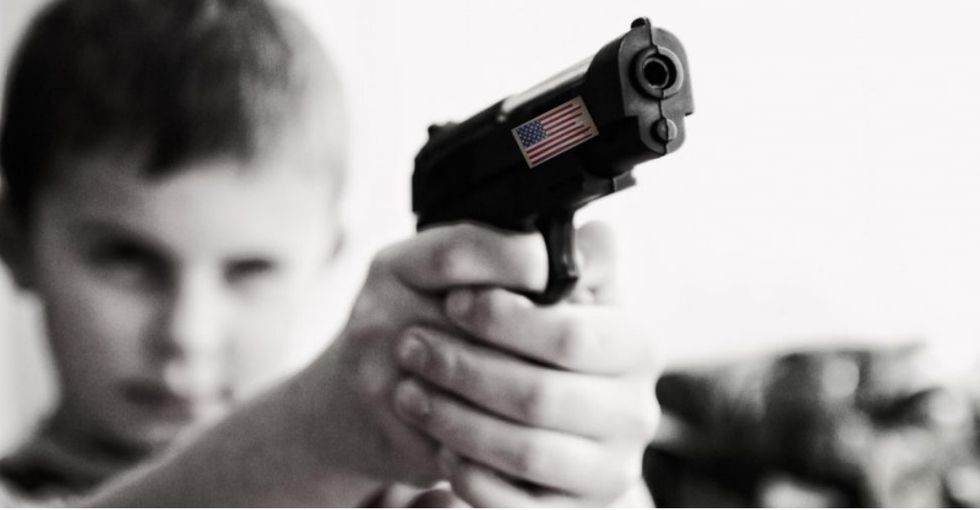 A gun is an inanimate object. It can’t do anything on its own.

Like any other tool, the person using a gun determines its use, right?

Therefore—obviously—our astronomical number of guns and comparatively loose gun laws aren't to blame for America’s 33,000 firearm deaths per year. Guns aren’t the reason that Americans are ten times more likely to be killed by guns than citizens of other developed nations. Guns aren’t why our gun-related murder rate is 25 times higher and our gun suicide rate is eight times higher than 22 other high-income nations. [1]

I mean, a gun can’t shoot itself, therefore guns have nothing to do with gun death statistics.

The fact that the U.S. accounts for 90 percent of all women, 91 percent of all children under 14, and 92 percent of people between ages 15 and 25 killed by guns among high-income nations [2] has absolutely nothing to do with guns. Many of those other countries have plenty of guns, too. But guns don’t kill people, people kill people, so clearly it's an issue with our people.

People with guns in other countries kill people too. Somehow, American people are just super extra killy with the guns.

In fact, the more guns the better, because even though statistics say that more guns equals more gun violence,[3] and more guns causes confusion for law enforcement, and people who have actually been in gunfights debunking this idea, we all know that the only way to stop a bad guy with a gun is a good guy with a gun.

Of course, the fact that evil also exists in other nations means that the only logical conclusion is that Americans must be more evil than people in other nations. And not just by a little bit. Our evil is so ubiquitous that no other developed nation has anywhere near our gun death rates. In fact, if you take away official armed conflict casualties (which seems fair, since we don’t have any official armed conflict happening on our soil), America’s gun death rate is also higher than Sudan, Iran, Syria, Turkey, Lebanon, the West Bank, Gaza, and Jordan. [4]

Clearly, our population is possessed by demons or something. Satan seems to have a heck of a foothold here in the U.S., eh? Aren't we lucky?

Then again, maybe it’s not so much evil American spirits. Maybe it’s more about mental health than actual evil.

Still definitely not about guns, though. Our easy access to weapons that have the capacity to kill two dozen people in not even as many seconds has absolutely nothing to do with mass shootings. Americans are just way, way, way more likely than people in other countries to have a screw loose. We have some kind of inherent tendency to go off the deep end and commit heinous acts of violence with semi-automatic firearms. I mean, it’s not our fault, it just must be the way Americans are hard-wired, since it’s obviously not about how our country approaches gun use.

Of course, not all gun deaths are due to people wishing harm upon others. A large percentage of gun deaths are suicides—clearly a mental health issue, which has nothing whatsoever to do with the immediacy and almost guaranteed success of using a firearm to commit suicide compared to other methods.

Some gun deaths are accidental, too. But the fact that our accidental gun death rate is also sky high compared to other developed nations doesn’t mean it’s a problem with guns or laws. Guns aren’t accidentally shooting people all by themselves, folks! That’s a brain problem, not a gun problem. Americans are obviously just dumber than people in other countries, woefully unable to figure out how to not accidentally shoot themselves or how to keep their guns out of the hands of toddlers.

The United States having a gun for every man, woman and child and comparatively loose gun regulation has zero to do with how our gun violence rates compare with other developed nations. America just has far more evil, crazy, and stupid people than other countries do. It’s the only reasonable explanation.

Don’t let that fool you, though. We are still—somehow, don’t ask me how—the Greatest Country on Earth. So if you don’t like it here, you can always go move to one of those semi-socialist European countries where healthcare is universal, guns are highly regulated, and parents don’t have to remind their kids to pay attention during active shooter drills when they send them off to school.

I’ll be sitting proud here in the good ol’ U.S. of A., reminding my kids that guns don’t kill people, people kill people.

Sometimes lots of people at once.

Most of the time with guns.

But only every other week or so.

My thoughts and prayers are with the victims. Every time, of course.