The awesome reason one girl went from hiding her 'flaw' to sharing it with millions. 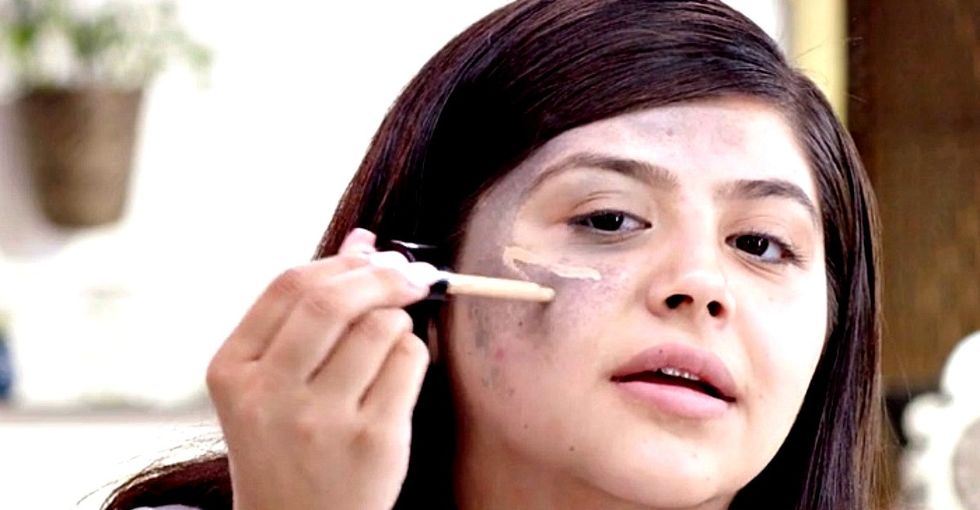 When Julia was little, she had a small grey mark on the left side of her face. By the time she turned 13, it had spread across her forehead and cheek.

Since it didn't look like your average birthmark, it worried Julia and her parents, so they went to a doctor to make sure it wasn't cancerous. While the biopsies came back negative, the doctors didn't have a name for the discoloration on Julia's face.

Julia Hernandez. All photos via Dermablend.

So, like any young woman of today, she put a photo of herself on the internet, and someone with the same condition told her what it was. It's a birthmark called Nevus of Ota, which is simply a hyperpigmentation of the skin.

Unfortunately, however, learning her birthmark's name was only half the battle. Now she had to learn how to live with it.

Considering she was also entering her teen years, a time when kids are the most judgmental, that was easier said than done.

"When [people] see my birthmark, they ask me if I have a black eye, or if I got in a fight, or something," says Julia. "That just made me feel, like, not normal."

She tried various coverups to conceal it, but none really did the job.

After years of enduring regular taunts and jeers, she finally came upon a foundation that helped — Dermablend.

"I was so happy because I never thought I would find a makeup that would make my skin look even," Julia says.

Now that she had the choice to cover up her birthmark, Julia decided to take a huge risk and put her whole self out there for the world to see.

She began doing makeup tutorials on YouTube during which she'd expose her skin pigmentation to show people how one covers up a birthmark like hers.

Showcasing this longstanding insecurity was not a decision Julia made lightly. She was incredibly nervous about what judgments might pop up in the comments. However, to her surprise, no such comments appeared.

Instead, Julia was flooded with messages of support and solidarity from people dealing with their own vulnerabilities. She even came across one girl with the same birthmark who was so grateful for the confidence Julia's makeup tutorials instilled in her.

But makeup isn't just about overcoming insecurities for Julia. It's also about exploring her artistic side.

"My face is like a canvas," Julia says. "I love to paint, so I get to be creative and create whatever look I want that day."

She doesn't feel like she has to cover up her birthmark all the time anymore, but when she does, it's more about showcasing her true self rather than trying to hide it. Dermablend gave her that choice, and with that came a huge dose of confidence.

After hiding her birthmark for years, she now feels comfortable just being able to be herself.

Posted by Upworthy on Wednesday, December 13, 2017