I wanted to know how Mister Rogers felt about gay people. Here's what I found. 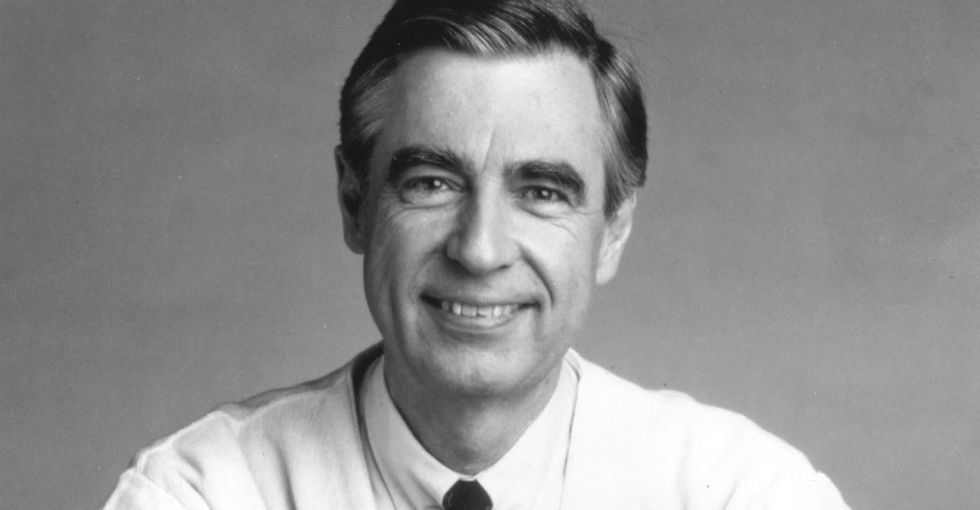 A few nights ago, I was sitting in a dark theater — popcorn in hand and tears leaking down my face — embarrassingly bent out of a shape from a movie trailer. Fred Rogers was to blame.

The whimsical theme song to "Mister Rogers' Neighborhood" concluded a short but powerfully nostalgic preview for the new documentary about the soft-spoken star, "Won't You Be My Neighbor?" And yeah, I'd morphed into a teary-eyed hot mess in a matter of seconds.

A question popped into my queer little brain right then, though, and I'm not entirely sure why:


Could Rogers have quietly been a homophobe?

He was a religious dude who grew up in a wildly different era than today. It's a toxic combination that, if we're overgeneralizing and I reflect on my personal experience, tends to produce the worst kinds of homophobes. Had the former Presbyterian minister been as saintly to queers like me as he'd been to seemingly everyone else?

I needed answers! So I went searching.

But first, let it be known that I respect Rogers and cherish the mark his big-hearted series left on me and generations past; I certainly wasn't looking for justifications to write a "Mister Rogers" hit piece. In a dark and dreary world, Rogers was a reliably bright light, and I wanted whatever I discovered to confirm my suspicions that the beloved children's advocate was a benevolent force for good — and nothing else.

But one thing I've come to learn as a jaded gay man is that the more flawless a fave of mine seems to be, the harder they fall from the high pedestal I've placed them on once their shortcomings inevitably air. Rogers could very well be the latest victim of my hero-worshipping, I warned myself, opening a Google tab with a preemptive cringe.

Here are the two big things I discovered:

Rogers didn't go on the record with specific opinions about LGBTQ people or the matters that affect them (at least from what I could find). But others have reported their experiences with him on the topic. By putting those puzzle pieces together, I would confidently argue that Rogers saw the humanity in LGBTQ people.

He didn't let his faith box him into any certain ideology regarding gay people or their rights. Michael G. Long, who authored the biographical "Peaceful Neighbor: Discovering the Countercultural Mister Rogers," noted Rogers' church in Pittsburgh was and continues to be inclusive to the LGBTQ community. Rogers' widow, Joanne, has said her husband had close friends who were gay, according to Slate.

He also stood strong against outside pressures to use his platform to condemn same-gender relationships, according to Vox's Todd VanDerWerff. Panning homosexuality likely would have been applauded by many parents tuning in, as mainstream America widely embraced homophobic attitudes throughout much of Rogers' reign.

But doing such a thing on-air never felt right to the sweater-loving saint. "He felt everybody was, in some way, a reflection of God," VanDerWerff wrote.

2. But Rogers wasn't immune to the backward views society has held of queer people.

While Rogers hired and befriended Francois Clemmons — a gay man who played Officer Clemmons in the series for 25 years — he didn't necessarily want the show associated with Clemmons' sexual orientation, either.

After word got back to Rogers that Clemmons had been spotted in a gay bar, Rogers asked the actor to avoid such venues, fearful Clemmons' sexuality would bring negative attention to the show.

"It was not a personal statement of how he felt about me," Clemmons assured UU World in 2016, noting the two remained close friends. "It had to do with the economics of the show."

Rogers urged him to stay in the closet, believing Clemmons' sexuality may alienate viewers. He encouraged him to marry a woman, too. Clemmons did — and the relationship ended in divorce a few years later.

It's difficult to reconcile the harmful actions of an icon who lived in a different time.

I wish Rogers had addressed Clemmons' predicament differently, of course. I wish he'd celebrated Clemmons' queerness on screen and off and allowed the actor to sashay his way on stage one trailblazing episode, rainbow flag held high.

But that's the thing: The rainbow flag wasn't associated with LGBTQ pride when Clemmons considered leaving the closet, because LGBTQ pride wasn't even a thing in those pre-Stonewall days (at least in the mainstream). It's not reasonable for me to expect a straight, cisgender man — even a superhero like Rogers — to possess a visionary moral compass and will to champion queer rights half a century before same-gender marriage even became normalized.

Rogers was extraordinary — but he wasn't a social justice clairvoyant.

Mister Rogers' empathetic nature pushed him, and his viewers, to be bold and continually grow in wonderful ways.

It's what has helped enshrine my appreciation for him and his show.

He adored kids and relentlessly fought for their wellbeing. His show regularly took on important and tough topics, like racism, the messiness of divorce, and the importance of inclusion. In many ways, Rogers was well ahead of his time, boldly pushing boundaries in the right directions.

Even on queer issues, Rogers evolved as time went on.

As Long wrote for HuffPost in 2014, Rogers' perspective on Clemmons' sexuality shifted throughout the years:

"Rogers evidently believed Clemmons would tank his career had he come out as a gay man in the late 1960s. But — and this is a crucial point — Rogers later revised his counsel to his younger friend. As countless gays came out more publicly following the Stonewall uprising, Rogers even urged Clemmons to enter into a longterm and stable gay relationship. And he always warmly welcomed Clemmons’ gay friends whenever they visited the television set in Pittsburgh."

I can't speak for Mister Rogers, of course. But he was the one who always told me, "I like you just the way you are."

If he were around today, I'd like to think queer kids would feel right at home in his neighborhood, too.

Watch the trailer (that made me cry) for "Won't You Be My Neightbor?" below: