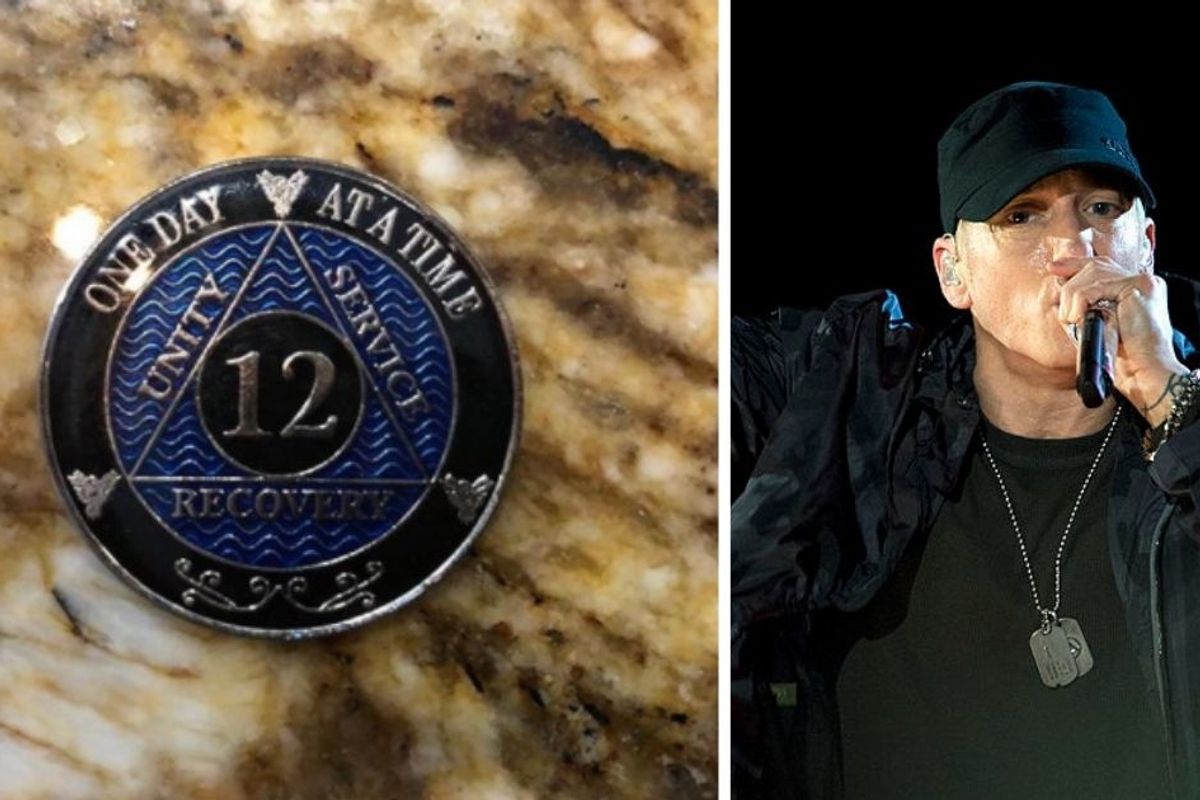 Drug and alcohol addiction doesn't discriminate. Whether young or old, rich or poor, famous or not, substance abuse crosses all differences and demographics. And addiction is an overwhelming obstacle to overcome, no matter who you are.

Rapper Eminem shared on Instagram this week that he had reached a big milestone in his own addiction recovery—12 years of sobriety. He shared a photo of a 12-year pin, which reads "One day at a time" and includes the words Unity, Service, and Recovery.

Marshall Mathers on Instagram: “Clean dozen, in the books! I’m not afraid.”

The rapper and actor had spent years battling an addiction to prescription drugs, which he described to Rolling Stone in 2011. "I was taking so many pills that I wasn't even taking them to get high anymore," he said. "I was taking them to feel normal. Not that I didn't get high. I just had to take a ridiculous amount. I want to say in a day I could consume anywhere from 40 to 60 Valium. And Vicodin… maybe 20, 30? I don't know. I was taking a lot of s--t."

Eminem got sober in 2008, and in 2011 shared with GQ what he had learned from his journey through sobriety.

"The thing sobriety has taught me the most is the way I'm wired—why my thought process is so different...I've realized that the way I am helps with the music. Sporadic thoughts will pop into my head and I'll have to go write something down, and the next thing you know I've written a whole song in an hour. But sometimes it sucks, and I wish I was wired like a regular person and could go have a f--kin' drink. But that's the biggest thing about addiction: When you realize that you cannot—for f--k's sake, you can not—f--k around with nothing ever again. I never understood when people would say it's a disease. Like, 'Stop it, d--khead. It's not a disease!' But I finally realized, F--k, man—it really is."

The star received encouragement from a fellow musician and recovering addict, Elton John, in an interview they did together for Interview magazine in 2017.

"Your sobriety day is in my diary," Elton John told him. "I'm so proud of you. I'm 27 years clean, and when you get clean, you see things in a different way. It makes your life so much more manageable. It seems to have made all the difference—I can tell when I speak to you."

"Getting clean made me grow up," Eminem replied. "I feel like all the years that I was using, I wasn't growing as a person."

Eminem's journey to recovery is like many others who abuse prescription drugs—delayed by denial and dismissal. "People tried to tell me that I had a problem," he recalled in a documentary. "I would say 'Get that f*cking person outta here. I can't believe they said that sh*t to me.'" He would think, "I'm not out there shooting heroin. I'm not f*cking out there putting coke up my nose. I'm not smoking crack," as if only illegal illicit drugs could be considered a problem.

Getting sober isn't easy for anyone, and 12 years is truly a milestone to celebrate—especially during a particularly stressful time in the world.

People in recovery have had to shift the way they maintain sobriety during the coronavirus pandemic. Meetings—a lifeline for many addicts—are having to take place online, which has both benefits and drawbacks. On one hand, attending online meetings might actually be easier for some, since it takes less effort to open a computer and log into a Zoom meeting than it does to leave the house. On the other hand, those human-to-human connections with people who understand your struggles are important, and removing the physical element of that connection changes the dynamic a bit.

Of course, the new stressors of a global pandemic and economic crisis add another layer to recovery. Routines and structure and stability are particularly important for people in recovery, and everything feels pretty topsy-turvy right now. Recovering addicts often feel isolated already, so social distancing poses an extra challenge as well. So if you have friends that you know have struggled with addiction, now is a good time to check in with them.

And if you find yourself struggling with drugs or alcohol, including prescription drugs, or if you feel like you're slipping into something beyond your control, there is support at your fingertips. Reach out to the Substance Abuse and Mental Health Services Administration National Helpline at 1-800-662-HELP (4357) or visit https://findtreatment.gov/.

From Your Site Articles
Related Articles Around the Web
eminem