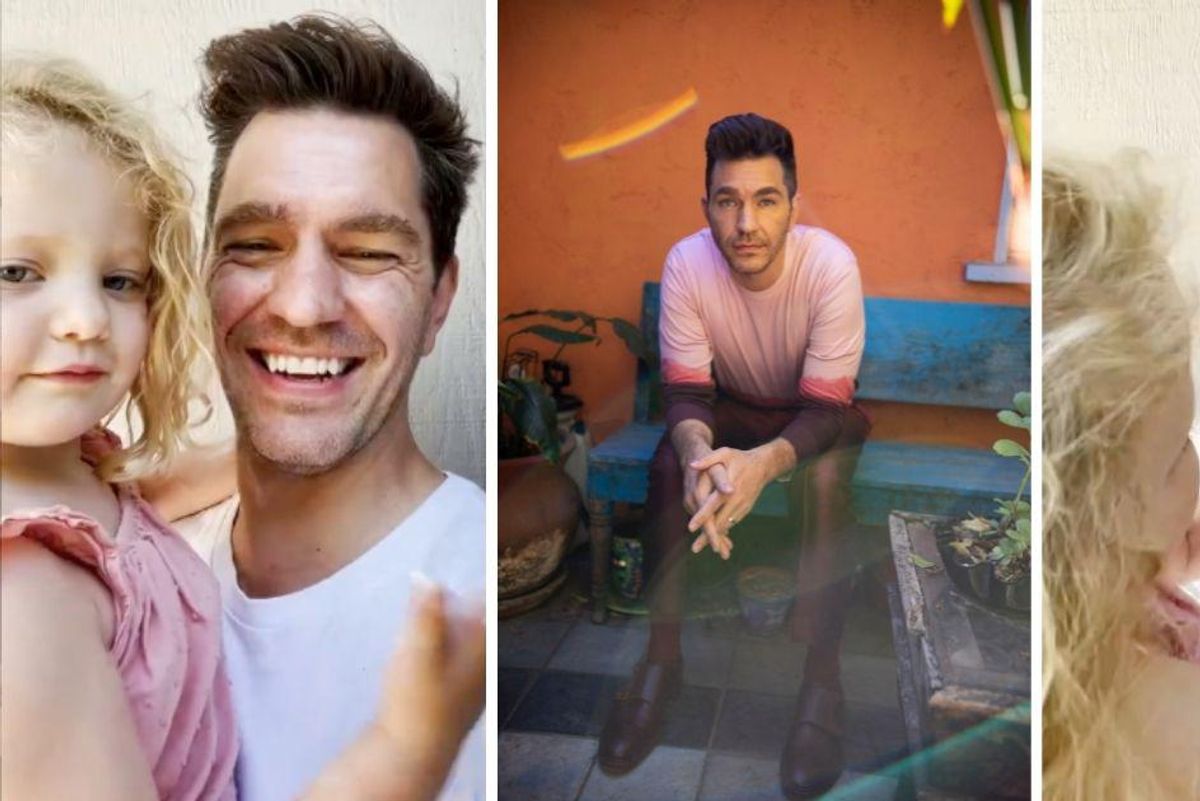 Since his first hit single "Keep Your Head Up" in 2011, award-winning multi-platinum recording artist Andy Grammer has made a name for himself as the king of the feel-good anthem. From "Good to Be Alive (Hallelujah)" to "Honey, I'm Good" to "Back Home" and more, his positive, upbeat songs have blared on beaches and at backyard barbecues every summer.

So what does a singer who loves to perform in front of live audiences and is known for uplifting music do during an unexpectedly challenging year of global pandemic lockdown?

Grammer told Upworthy that losing the ability to perform during the pandemic forced him to look at where his self-worth came from. "I thought I would have scored better, to be honest," he says. "Like, 'Oh, I get it from all the important, right places!' And then it's taken all away in one moment, and you're like, 'Oh, nope, I was getting a lot from that.'

"It's kind of cool to break all the way down and then hopefully put myself back together in a way that's a little more solid," he says.

And no worries—we're still going to get at least one anthem out of him for the summer. His new single, "Lease on Life," which will be released on June 28, is part of his new album that speaks to a lot of what we collectively experienced over the past year.

You can get a taste of the song here:

Grammer acknowledges that it was difficult to find positives in the pandemic, even for him. "Happy for happy's sake is not super authentic," he says. "The word 'positive' inherently is a little cheesy, I think. But if it is rebellious against negativity, it starts to gain some legs for me."

He points out that most of the "feel-good" songs he's famous for are actually grounded in a lot of pain, which is what makes them truly connect with a broad audience.

"If you hear a song like 'Keep Your Head Up,' it's not just like, 'Be happy!'" he says. "I wrote that song after my mom died. So like, I'm crushed, and in the face of that, choosing and finding a way to stay up. I think that's the grounding piece to optimism that makes it something that people believe in and that is true and sincere."

He says the key is always trying to write something that's true. "Because if you get it to be true, then it has this extra resonance to it. The quick analogy I use is that Isaac Newton wrote out what gravity was. He wrote it out for the first time, and everyone else was like, 'Gravity! I have gravity all the time! Oh my God, you super nailed it.' And I think every great song has something of that in it."

The other thing Grammer did during pandemic downtime was spend a lot of time with his two daughters, 4-year-old Louisiana and 1-year-old Izzy.

"Overall, that's been the huge win," he says. "It's just been an intense, awesome amount of time for someone like me who does travel quite a bit, to have this whole year. I haven't gotten on a plane once. And to just be, every single night, having the routine with these little girls, it's really, really special."

He and Louisiana are even working on their first collaborative musical project together. In partnership with Quaker Chewy and the American Camp Association, Grammer is crowdsourcing lyrics for a summer camp anthem that he and his preschooler are going to write together.

"It's been really hard for kids throughout the pandemic to not be able to play with other kids," Grammer says. "And so with summer coming and some things are opening up and kids can actually go to camp, we want to send as many kids as we possibly can to go to go play with each other."

Summer camp song lyrics can be submitted at chewycamptrack.com before June 30, 2021. For every lyric sent in, Quaker Chewy will donate $1, up to $200,000, to the American Camp Association's Send a Child to Camp Fund. Grammer will pick lyrics from those submitted, and the Chewy donations will be used to send up to 500 children to summer camp next year.

Grammer says having Louisiana help choose the lyrics will be a blast. "She sings a lot, and I think it's going to be really fun," he says. "It's one of the first songs I'm really going to do with her. Really fun."

After being in a "songwriting hibernation zone" during the pandemic, Grammer is excited to be back out. And we're excited for his new album to come out to see what kind of awesome, life-affirming music he shares with us next.

From Your Site Articles
Related Articles Around the Web
music