Amy Schumer caught a major milestone moment on video, and it's toddlerhood in a nutshell 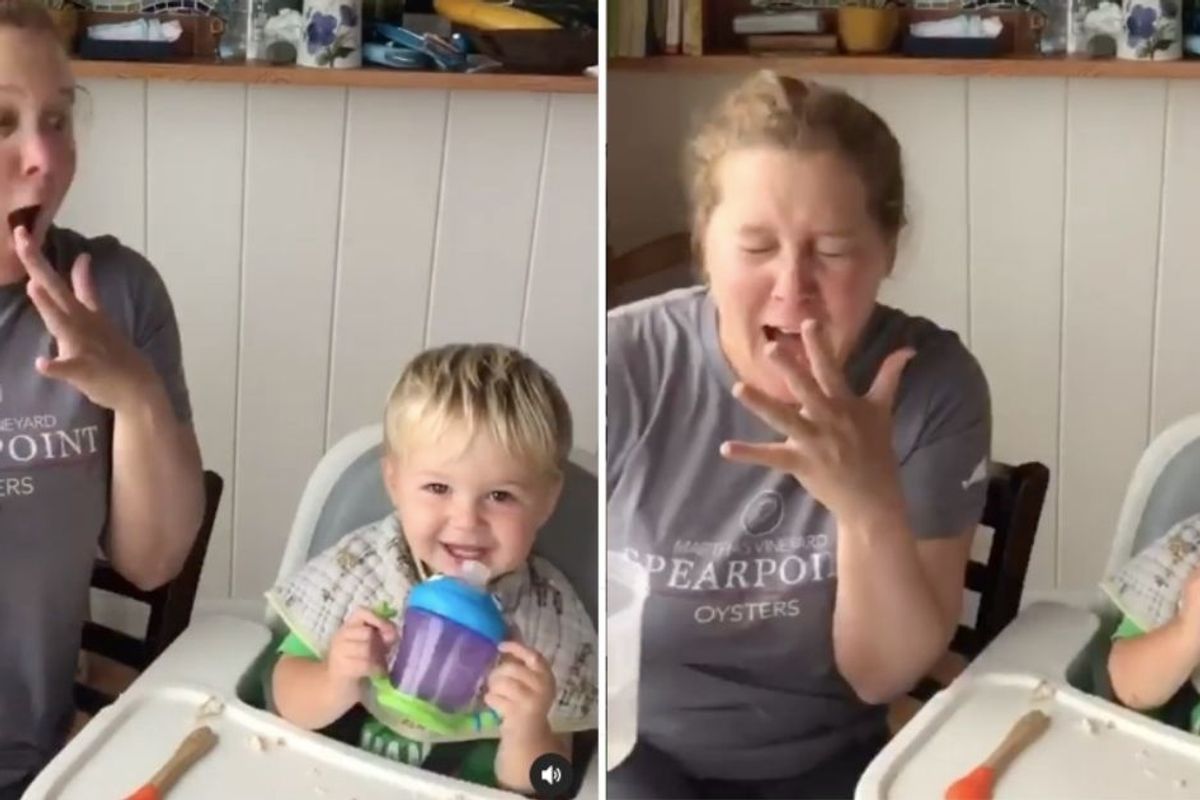 There is nothing more delightful as a parent than when your child says "Mama" or "Dada"—or some variation thereof—for the first time. That verbal recognition is a precious moment that most parents treasure, but few are able to catch on video. Unless you have a camera on your little one 24/7 (which would be a little creepy), most major kid milestones live only in our memories or as notes in a scrapbook.

Comedian and actress Amy Schumer got lucky this week, though. She managed to catch her son Gene, who is 16 months old, saying "Dad" for the first time on video. And naturally, it's adorable.

"We just wanted to say hi Daddy, we miss you and we hope you're having a fun day," Schumer said in the video, referring to her husband Chris Fisher, who wasn't home. "Can you say 'Dad'?" she then said to Gene, who paused for a moment then obliged.

Schumer and whoever is behind the camera gasped in surprise, and a woman sitting at the dining table started clapping when he said it. And for a moment, Gene got excited, too.

But then, total toddlerhood happened. Watch:

Poor Gene probably got startled by everyone celebrating and it overwhelmed his little 16-month-old self. Such is life with a toddler. Over-the-top adorableness and joy followed by bursts of tears and wailing. It's just how it goes. That dichotomy is toddlerhood in a nutshell.

"This video was clearly a surprise to us Getting to experience these first moments with my son makes me feel so lucky," Schumer wrote in the caption. Then she made reference to a friend, Angelia Henry, and her son. "I would like to ask anyone reading this to google DJ Henry," she wrote.

According to InStyle, D.J. Henry was a college student at Pace University who was shot and killed by police in 2010. Henry at a party at a restaurant when other patrons got into a fight. Police were called, and as Henry was driving away from the scene, a police officer shot him through his windshield. He was pulled from the car and handcuffed on the ground. He died on the pavement.

The family sued. but a grand jury did not indict anyone involved in the killing. The family accepted a partial settlement in 2016, but in the wake of the Black Lives Matter movement, the family is asking for a new investigation into Henry's death.

"This was murder. It's plain and simple," Henry's sister Amber told local Boston news outlet 25 Investigates. "It's obvious it didn't have to end this way. I have a hope in my heart and a fire in my soul that I'm not going to give up until it happens. I know if my brother was here he would do the same thing for me."

How lovely for Schumer to draw attention to these parents' pleas for justice while sharing her own parenting moments. With more than 2.6 million reactions to her "Dad" video, that's a powerful way to use her influence and reach a lot of people with their story.

From Your Site Articles
Related Articles Around the Web
parenting