A heartbreaking video about bullying gets a heartwarming response from the Yankees.

These guys came through for her in a big way. 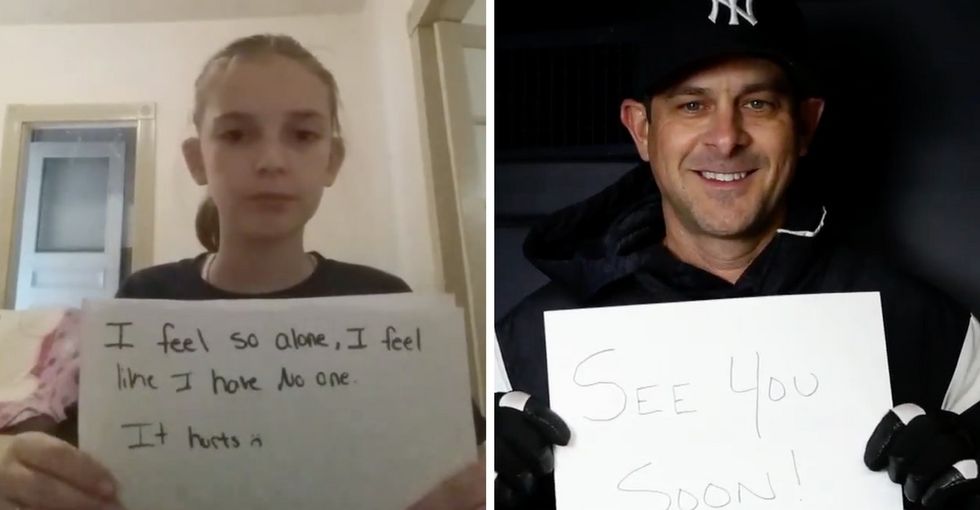 Cassidy Warner is 10 years old, and like many youngsters, experiences bullying at her school.

She shared her story — all too relatable to anyone who's been made to feel unwelcome for who they are — in a powerful video on Facebook. In it, she holds up a series of papers with handwritten messages for the world.

As requested, everyone wanted me to repost... This is a video my daughter Cassidy posted orginally from her own Facebook page, her caption said " please everyone help share my story about being bullied not only for me but for everyone" Her story reached 22k views before the Scranton School Dirstict contacted Facebook and her facebook got shut down because she's not 13 and of age to have a facebooK. She was threatened by the principal to remove the video or he was going to report it and he was successful. But this does not stop here, I will be my daughters voice I will share her story and I hope others will share too, this Isn't about the shares or views or if it goes viral its about spreading awareness although seeing that smile on Cassidy's face each time the number of views and shares got larger that was everything. Shes upset she has to start all over but let's do this for her....please share her story let's put that smile back on her face!!!

"My name is Cassidy. I am 10 years old. I go to John Adams Elementary School. I am in 4th grade. I started getting bullied in 1st grade. One day during recess a group of kids grabbed my purse off of a teacher, and spit on it and me. The group of kids always come up to me during recess, trying to fight me. They hit me, kicked me, pulled my hair, pushed me, stepped on me, spit on me… Kids don’t even want to go near me. Wherever I sit at the lunch table, the kids get up. They threaten to kill me, 2nd they tell me to kill myself. They also spilt milk all over my jacket. They also call me names. There’s four of them and only 1 of me. The principal doesn’t do anything. I feel so alone, I feel like I have no one. It hurts. This is my story… Stop bullying! Not just for me, for other kids, to[o]. Please share my story! Thank you for watching!"

Cassidy's video was deleted from Facebook, but her mom, Jenn Slater, then uploaded it to her own personal page. Since then, Cassidy has appeared on CNN to share her anti-bullying message and even got a warm note from actor Hugh Jackman urging her to "never stop asking for help."

Nearly two weeks later, Cassidy got another big message of support from a very unexpected group of people: the New York Yankees.

In a video posted to the team's Twitter account, the Yankees responded to Cassidy's story with a series of handwritten notes of their own. Many of the team's stars, such as Aaron Judge, Giancarlo Stanton, and CC Sabathia took part in the heartwarming video.

"Dear Cassidy. My name is CC Sabathia and I play baseball for the New York Yankees. My teammates and I wanted you to know that we care about you. We know sharing your story must have been difficult, but you showed courage and strength, and inspired us to reach out to you. We may be older than you, we may be taller than you, but we want you to know that we look up to you. You are not alone! Count the New York Yankees among your friends! You can sit next to us at lunch any time!!! In fact, we are saving a seat for you at our lunch table in the clubhouse. Bullying is wrong. We won’t stand for it! No one should ever be made to feel bad about who they are. We need to care for each other. There are 25 of us on this team and we all got your back. See you soon!"

Like Cassidy said, this is about more than just her; it's about all bullying.

According to the U.S. Department of Health and Human Services, 28% of students in grades 6-12 experience bullying, and more than 70% of students have witnessed it.

HHS has a comprehensive guide for parents to help teach their kids about bullying (and how to prevent it) on its website. Its tips include educating kids about what bullying is, making this an ongoing dialogue, encouraging kids to engage in hobbies, and instilling in them the values of kindness and respect.