7 powerful quotes from Obama's DNC speech that'll get you hyped about democracy. 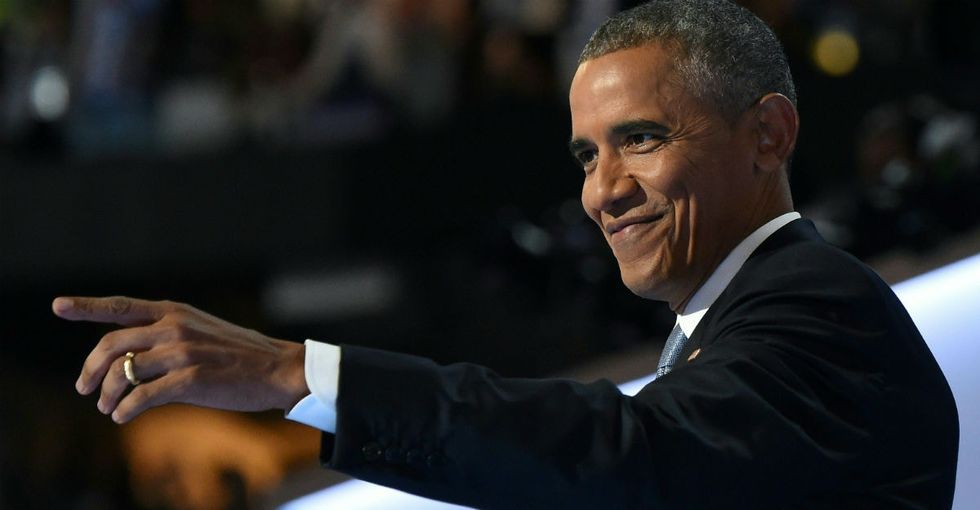 That President Barack Obama, he sure knows how to give a speech.

So it's no surprise that on July 27, 2016, the house was packed as the 44th U.S. president addressed the nation at the Democratic National Convention in Philadelphia.

He was there to stump for his former rival and secretary of state, Hillary Clinton, of course.

But his speech was about so much more than that.

While Obama certainly had a few digs for candidate Donald Trump up his sleeve and made sure to tout the high points of his own time in the White House, he also had some inspiring stuff to say about the power of creating our own America through the ballot box — regardless if we vote red or blue.

1. Obama pointed out that we have to care about democracy 365 days a year — not just one Tuesday in November.

"If you want more justice in the justice system, then we’ve all got to vote — not just for a president, but for mayors and sheriffs and state’s attorneys and state legislators," the president explained.

2. He made sure to note it's totally fine if you don't always agree with everything a candidate is saying. In fact, that's actually sort of the point.

What you shouldn't do, the president implored, is abstain from the voting process because you don't see your views fully represented. The only way to make change is to get involved yourself.

3. The president reminded listeners that tomorrow isn't something to be afraid of — it's something we create with our actions.

That's kind of what makes America so great.

4. Obama also acknowledged change can't happen without a lot of hard work from the ground up from people like you and me.

One of the great things about the internet is that it's made getting involved with politics easier than ever. While Obama was talking specifically about the DNC's own organizing arm, it's never been more clear that the future of politics and political organizing lies with the younger generations of people who are just getting involved for the first time.

5. He ensured us that, even when times get tough, real change is within reach if we work hard enough.

6. He even gave a shout-out to a political revolution that will likely shape election landscapes for years to come.

7. And with three simple words, Obama reminded us disparaging your opponent may be easy, but it doesn't produce results.

When the crowd erupted in "boos" at the mention of Trump's name, Obama was quick to reiterate that booing is not democracy in action — organizing, canvassing, making phone calls, and voting is.

The president knows that a great speech or inspiring quote means nothing if it doesn't spark real action.

Take a hint from the president — even if he didn't win your vote — and cast a ballot this November for your candidate. Register to vote today.