Why don't women come forward after sexual assault? This comment nailed it. 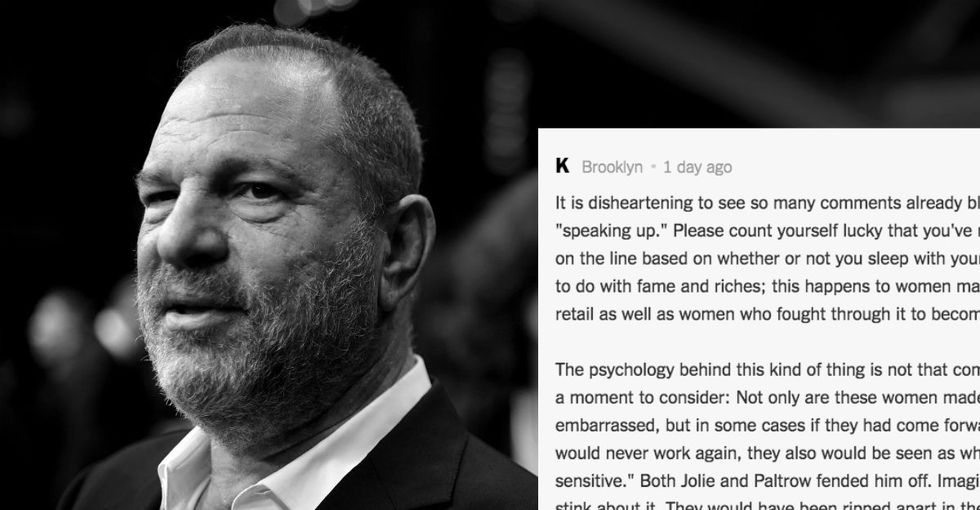 "Why didn't she say anything sooner?"

It's the question that frustrates sexual assault prevention advocates and discredits the victims who bravely come forward after they've been targeted.

Stars Angelina Jolie and Gwyneth Paltrow — who both disclosed to The New York Times they'd been sexually harassed by movie mogul Harvey Weinstein years ago — are among the latest women now having to trudge through a predictable wave of victim-blaming following their disclosures.

Paltrow and Jolie's descriptions of abuse follow an explosive report in the Times on Oct. 5, 2017, that chronicled decades of alleged sexual harassment at the hands of Weinstein — a man with seemingly boundless sway and power in the filmmaking world.

Sadly, Paltrow and Jolie were met with various forms of the question. "Why didn't the women of Hollywood stop him?" sprouted up immediately in corners of the internet.

One viral comment on the Times article, however, nailed why questioning a victim's actions after surviving sexual harassment or assault does so much harm.

"It is disheartening to see so many comments already blaming women for not 'speaking up,'" the reader, identified as "K" from Brooklyn, began.

"Please count yourself lucky that you've never had your career on the line based on whether or not you sleep with your boss," they continued. "It has nothing to do with fame and riches; this happens to women making minimum wage in retail as well as women who fought through it to become CEOs."

"K" continued, giving context as to why it's often very difficult and complicated for survivors to speak up after being abused (emphasis added):

"The psychology behind this kind of thing is not that complex, so please spare a moment to consider: Not only are these women made to feel humiliated and embarrassed, but in some cases if they had come forward, they not only would never work again, they also would be seen as whiners and 'too sensitive.' Both Jolie and Paltrow fended him off. Imagine if they made a big stink about it. They would have been ripped apart in the media! 'Oh for goodness' sake, a dirty old man came on to you. You rejected him and moved on, why the fuss?' But, of course, now we must insist on blaming them for 'perpetuating' Weinstein's behavior. Please."

As "K" described, victims often stay silent because they're vulnerable to the power abusers have over the situation; victims could lose their job or see their credibility attacked, for instance. These kinds of power dynamics — whether it be in Hollywood or not — play a big role in why victims stay silent.

For victims of sexual harassment, the threat to their livelihood does not end after a single encounter with an abuser. If a young, less accomplished Paltrow had spoken out against a figure like Weinstein, would he have irreversibly tarnished her reputation? Would he have planted unforgiving stories about her in the media? Would she have ever worked again? These are the sorts of threats victims weigh before speaking out. A predator's hold on a victim's career or reputation creates a culture of silence.

The commenter also used Brad Pitt's involvement in the story to note a sexist double standard in how we see victims of sexual assault.

If we're blaming Paltrow and Jolie for not speaking up sooner, why aren't we blaming Brad Pitt as well?

Pitt, who'd been romantically involved with both Paltrow and Jolie at different points in his career, reportedly knew about Weinstein's predatory behavior, according to The Daily Beast, yet he worked with Weinstein on two films following the disturbing encounters. The fact that he's largely been left out of the discussion says a lot about how we view victims of sexual assault, particularly when they're women.

"K" went on to say that the attitudes of blaming women for their own persecution are astounding: "Note that the comments have not centered around Brad Pitt's not saying anything, though he knew about it with not one but TWO romantic partners...It is not the women's job to monitor men's behavior."

Weintein (left) and Pitt (right) at the premiere of  "Inglourious Basterds" in 2009. Photo by Kevin Winter/Getty Images.

The assertions made by "K," whose comment drew over 3,000 likes and a long thread of supportive replies, aren't just steeped in opinion; advocates argue sexual harassment is rarely just about sex — asserting power plays an instrumental role.

"Most frequently, survivors of sexual harassment, exploitation and violence delay making an official report of what has happened out of fear of how others will respond," Kristen Houser, chief public affairs officer at the National Sexual Violence Resource Center, explained to HuffPost in March 2017. "From retaliation by the perpetrator to gossip, dismissive responses and outright victim blaming by colleagues, friends and family."

We need to stop asking "Why didn't she say anything?" and instead wonder "Why aren't we doing more to support survivors?"