This week in black women: a royal wedding and the best golfer you've never heard of. 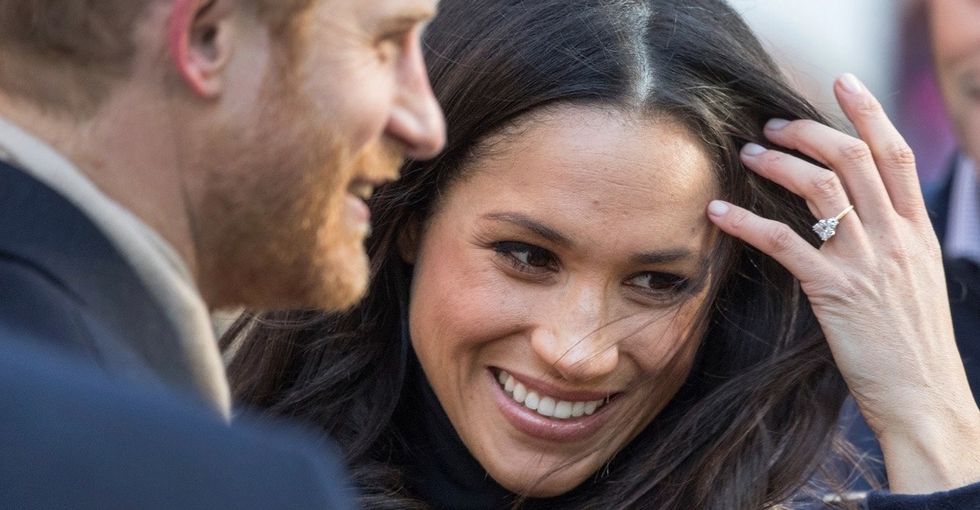 This is the fifth edition of "This week in black women," a weekly column dedicated to signal-boosting the black women who make the world spin.

This week, we shout out a pioneering mayor, a cool-as-a-cucumber newscaster, a legendary golfer, and more. Celebrate them! Follow them! Support them! Let's do this.

The Rhodes Scholarship is one of the most distinguished academic awards for university students. Just 32 young people are selected to receive the prestigious award each year, which covers expenses for two or three years of graduate study at Oxford University.

In a landslide victory, Cantrell was elected the next mayor of New Orleans. She will be first woman mayor in the city's 300-year history.

This is not Mayor-Elect Cantrell, but it IS the appropriate response to hearing about a city's first female mayor. Photo by Sean Gardner/Getty Images.

"Y'all play too much": Rahel Solomon

Solomon is a newscaster in Philadelphia who is going viral this week after completing the "one-chip challenge" with her colleague on air.

The challenge involves eating a single, albeit dangerously spicy, Paqui brand chip. Solomon ate the chip and barely flinched. Her colleague, however? Not so much.

The highlight of the video is Solomon calmly asking, "Can we get a medic in here for Jim?"

"If you don't know, now you know": Ann Gregory

Every week, I ask you to send me links to stories or people I should highlight. Reader Mark S. let me know about one of his favorite women in history:

"Not sure if there is a time limit on your series on black women but I think Ann Gregory deserves a shout out."

He's right. Gregory is a trailblazing athlete who doesn't get nearly enough props.

Born in 1912, Ann Gregory (née Moore) was the first and one of the best black women to play golf. Gregory didn't pick up the game until she was in her 30s, but her storied amateur career spanned more than four decades.

She played in United Golf Association tournaments for black players, where she earned the unofficial title "The Queen of Negro Women's Golf." She was not only a dynamo on the course, but an active community volunteer, military wife, and mother. She competed well into her 70s, winning gold at the U.S. Senior Olympics in 1989. She passed away in February 1990.

Athletes like Gregory paved the way for other golfers of color, including Tiger Woods, whose club is shown here. Photo by Mike Ehrmann/Getty Images.

Dee Rees is the director behind the new film "Mudbound." The film follows two families — one black and one white — in the years immediately surrounding World War II.

In a recent interview with the Los Angeles Times, Rees revealed why focusing on stories from the Jim Crow era is vital.

"When a certain person says 'make America great again,' I think this period is the 'again' he’s referring to. And I’m trying to get behind this mythology of the 'greatest generation,' who we were, what we really did and what did it cost. The American educational system has a reductive, simplified view of history. But things didn’t end with [the abolishment of] slavery. This period is our link between our then and our now."

"Mudbound" is currently streaming on Netflix and in a handful of theaters. It's also generating some early Oscar buzz.

And of course, a bunch of happy tweets about Meghan Markle.

Prince Harry and actress Meghan Markle announced their engagement this week. Markle is biracial and American, so needless to say, my Twitter timeline was very excited.

Prince Harry's future mother-in-law is a black woman with dreadlocks. There are no words for this kind of joy.
— Samara (@Samara)1511780323.0

Controversy has been brewing for months at the University of Texas at Austin as student-athletes petitioned the school to stop playing the school's alma mater song, "The Eyes of Texas."

The issue is that the origins of the song are allegedly steeped in racism. It was written in 1903 by two students who were inspired by speeches given by then-UT President William Prather, in which he used the phrase "The eyes of Texas are upon you." Prather himself had been inspired by General Robert E. Lee—leader of the Confederate army that fought for the right to own slaves—who used to say "the eyes of the South are upon you."

That's not all. The song is set to the tune "I've Been Workin' On the Railroad," which has its own questionable origins, and according to the Austin American-Statesman, "The song debuted at a Varsity minstrel show, a fundraiser for UT athletics, and was at some points performed by white singers in blackface." (Minstrel shows were a long, disturbing part of America's history of racism, in which white performers made themselves into caricatures of Black people and Black performers acted out cartoonish stereotypes in order to entertain audiences.)

This summer, in the midst of nationwide protests against racial injustice, students at the university launched a petition asking the school to confront its historic ties with the Confederacy in the names of buildings on campus and to formally acknowledge the racial roots of the alma mater song. A second student petition asked the school to replace the song with one that didn't have "racist undertones" in an attempt "to make Texas more comfortable and inclusive for the black athletes and the black community that has so fervently supported this program."