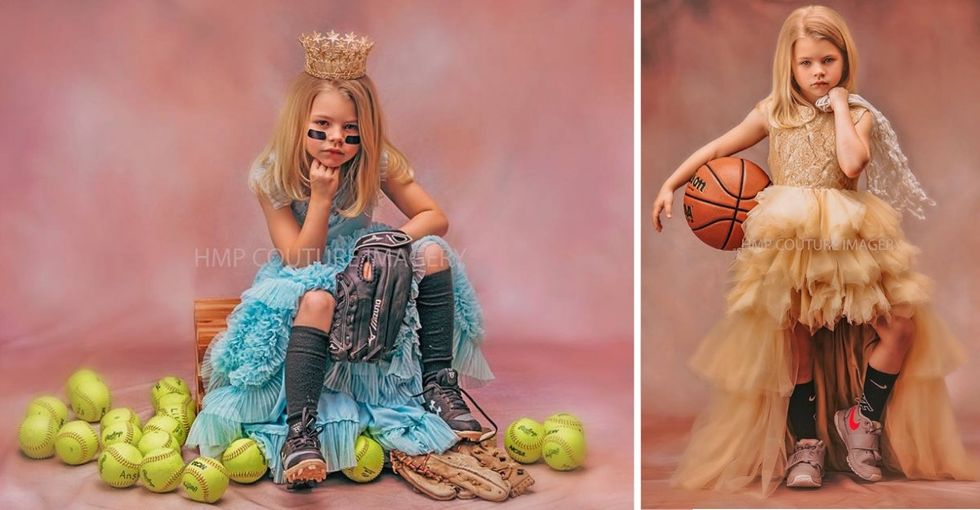 Some of the HMP Couture sports models

This article originally appeared on 4.17.19

This one's for the girls who know you don't have to chose between sparkles and sports.

For too long, girls have been sent the message that they have to be either/or. You're either a girly-girl or a tomboy. You're either into sparkly princesses or sports practices. From the early days of childhood, we're told in bold and subtle ways to squeeze ourselves into separate boxes.

But those boxes are bullspit, and most of us know it. Girls don't have to choose between feeling beautiful and being badass. We can be both at the same time.

Perhaps that's why a portrait shoot shared by HMP Couture Imagery showing girls dressed up in fancy dresses andsports equipment has gone insanely viral. The shoot is called "Because you can do it all," and in just a few days it has already been shared 175,000+ times.

The woman who photographed the shoot says a comment from a fellow mom sparked the idea.

Heather Mitchell, the photographer from Alabama who runs HMP Couture Imagery, told Upworthy how the portrait shoot came about.

"My youngest daughter is 8 and she is trying softball this year for the first time," said Mitchell. "We were at practice a few weeks ago and I was talking with the other moms. I was saying that I hoped Paislee learned to love the game because she was athletic. One of the moms told me that she was not athletic, that she was a girly-girl."

"I couldn't sleep that night," Mitchell continued. "All I could think was, 'Why does she have to choose?' I played every sport my school offered and wore lipstick to every game. So the next day we went to the studio and created her shot."

Mitchell says she only spent about three minutes shooting because she knew exactly what she wanted to create. After she posted the photos of Paislee to her personal Facebook page, she got a ton of requests from other parents for the same kind of shoot. After adding two days to the schedule, they sold out in an hour—and the requests just keep on coming.

Mitchell hopes that girls see these photos and realize that they don't have to choose one identity.

The idea that crinoline and cleats can't exist in the same mental space is silly, but common. Girls (and boys for that matter) can love pretty things and kick butt at sports. They don't have to be one thing or the other.

"My parent taught me that I could be anything I wanted growing up," Mitchell told Upworthy. "I didn't realize till I was much older that everyone is not that blessed."

These photos are an excellent reminder to questions our assumptions and not place unnecessary limits on anyone—and an empowering example for girls who don't fit neatly into a socially constructed box.

"I hope that every little girl that sees this series can see that there is no box," says Mitchell. "Whatever their dreams are they can achieve."