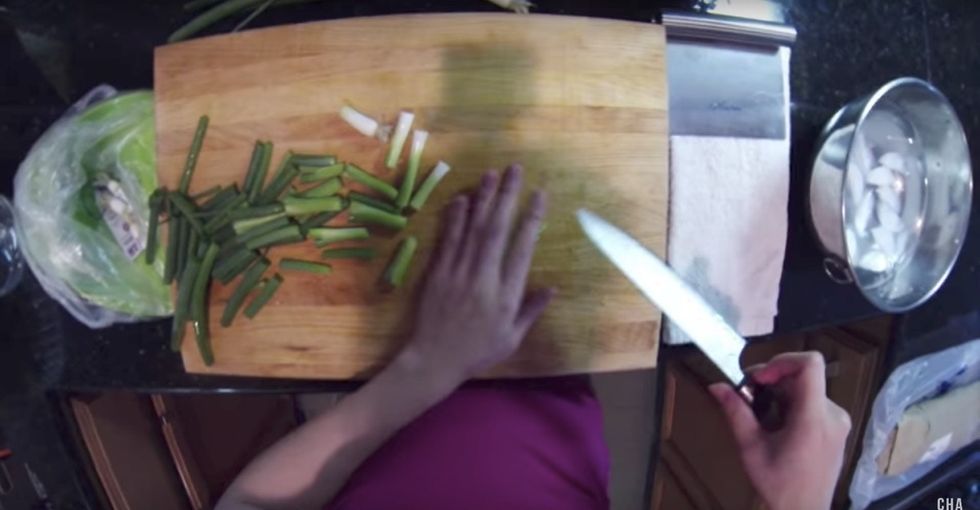 Ha smiles after being crowned Masterchef. Photo by Greg Gayne/Fox.

Ha has a rare autoimmune disease that attacked her spinal cord and optic nerve. She started losing her vision in 2004 while she was in her 20s.

Ha compares her vision loss to "looking at a very foggy mirror after a hot shower." After her diagnosis, she worried she'd have to give up cooking. It was an interest she was just beginning to explore and one she had a serious talent and passion for. Instead of shying away from the kitchen, Ha decided to learn to navigate her new reality.

"It's like any other challenge in life; you just face it head on and hope for the best," she said in one of her recent videos.

A seasoned chef, Ha leans into her other senses to bring her culinary creations to life.

In a recent video for her YouTube channel, Ha wears a GoPro camera while expertly preparing a mouthwatering meal of steamed whole snapper with black bean sauce and blistered green beans. She describes it as a "typical weeknight meal," the very thought of which separates home cooks from Masterchefs.

At home, she keeps her kitchen organized so she can find all of her ingredients at a moment's notice.

All GIFs via Christine Ha/YouTube.

Ha is patient, taking her time to feel, smell, prep, and cut ingredients.

She sometimes uses adaptive tools, but much of her cooking is done by touch. She deftly guides her knife to accomplish intricate cuts.

Just like a sous chef in a professional kitchen, sometimes Ha's partner lends a quick hand.

Ha uses cooking, food, and telling her story to connect and communicate with people around her.

Preparing and sharing meals is a great way to unite people and celebrate what makes each of us unique. Plus, you get to eat tasty food with your favorite people. And if it's Gordon Ramsay approved, it's that much sweeter.

Watch Christine Ha make a delicious dinner ... just maybe not while you're hungry.