These 'Wrinkle in Time' Barbies go on sale next month. And they look incredible. 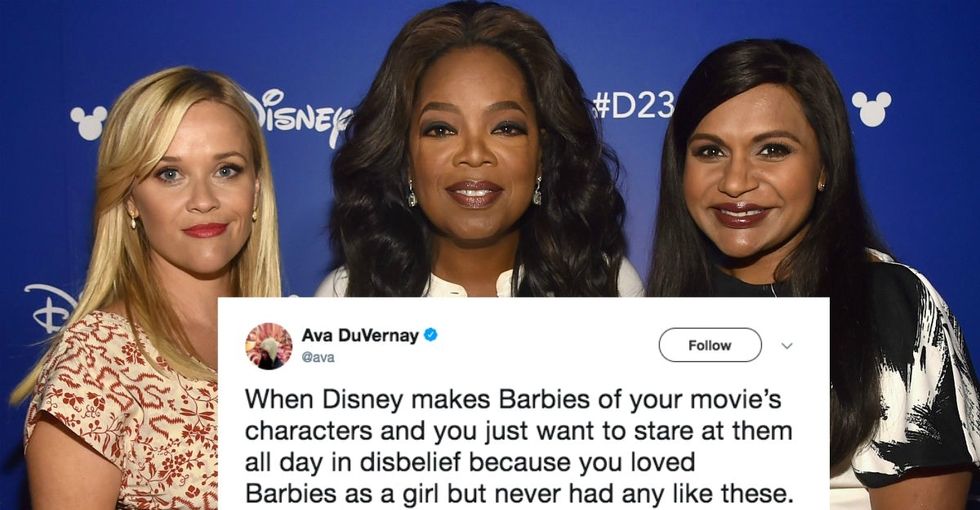 The internet nearly broke when the trailer for "A Wrinkle in Time" went viral last summer.

And with good reason, too.

The cast list reads like a block on the Hollywood Walk of Fame, with Oprah Winfrey, Reese Witherspoon, Mindy Kaling, Storm Reid, Chris Pine, and Zach Galifianakis all starring in the film, which is based off the 1962 sci-fi novel of the same name.

And on January 24, 2018, the film gave fans another reason to celebrate: "A Wrinkle in Time" got the Barbie treatment.

Dolls made in the likes of Mrs. Who (Kaling), Mrs. Which (Winfrey), and Mrs. Whatsit (Witherspoon), seen respectively below, will go on sale beginning February 23, 2018.

Photos via "A Wrinkle in Time"; and courtesy of Mattel, used with permission.

And Mrs. Which? Nailed it.

Fans are loving the dolls.

Let's face it: The Barbie brand has been a bit ... problematic, historically speaking.

But Mattel has been trying to change that.

In recent years, the brand has launched new dolls that are more body positive and inclusive. It made waves in 2015 with its clever, progressive ad campaign encouraging girls to dream big, and the company has also made efforts to shatter gender norms that suggest that Barbies are for girls only.

Mattel's bold moves haven't been lost on Ava DuVernay, who directed "A Wrinkle in Time." She was loving the new looks modeled after the film's characters too, claiming in a tweet that while she had Barbies growing up, she's "never had any like these."

When Disney makes Barbies of your movie’s characters and you just want to stare at them all day in disbelief becaus… https://t.co/TV9dnD48YX
— Ava DuVernay (@Ava DuVernay)1516853910.0

More of this, please, Mattel!

Check out the trailer for "A Wrinkle in Time" below: