The fight for equality didn't end with gay marriage. 5 acts of bravery you should know. 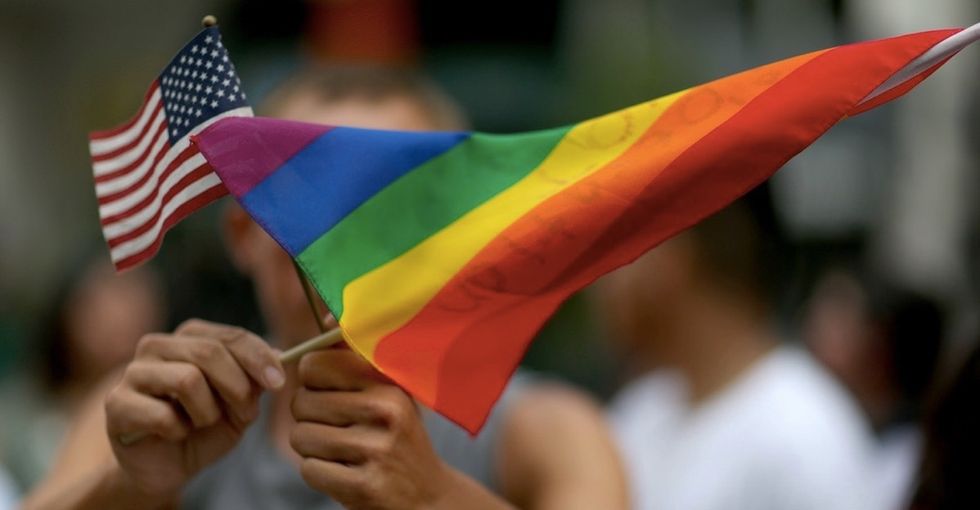 At the time, 60% of Americans felt same-sex marriages should be legally valid, so for many, it was a long-overdue celebration. Even the White House got in on the fun.

But while most of us celebrated, sore losers and enemies of progress in every corner of the country got to work on anti-LGBT legislation, often described as "religious freedom" bills.

Anti-equality officials introduced these bills hoping businesses and individuals could cite religion as a reason to deny service or goods to LGBT people. Some of the potential laws were just related to marriage-related goods (think bakeries, florists, tailors), while others went even further, trying to allow taxpayer-funded foster care and adoption agencies to discriminate against LGBT parents and prospective parents.

Don't get it twisted: This isn't religious freedom. It's bigotry and bullying.

But when faced with cruelty and injustice, many brave people have stepped up to fight back.

You may not know their names or live in their cities, but these men and women are on the front lines continuing to fight for equality long after the confetti dropped.

They're the unsung heroes of a movement that didn't end in June 2015. And today, I'm singing their praises.

1. The members of the Charlotte City Council who passed a nondiscrimination ordinance despite the governor and legislature throwing shade.

The new ordinance added sexual orientation and gender identity to long-standing protections like race, religion, and age. Bars, restaurants, taxis, and stores in Charlotte can't discriminate against customers because they're gay or transgender.

The ordinance passed on a 7-4 vote after a heated three-hour public meeting. But in North Carolina, the state government can overrule city decisions, and legislators may strike down some or all of the new law.

2. The governor of South Dakota, who vetoed an unnecessary bill affecting the lives of transgender kids.

The mean-spirited bill, which would have required transgender kids to use the bathroom or locker room of the gender they were assigned at birth, shouldn't even have made it to the governor's desk.

Luckily, Gov. Dennis Daugaard vetoed the bill and put an end to the madness.

The presidents on Mount Rushmore may or may not be crying about the state of things in South Dakota. Photo by Always Shooting/Flickr (cropped).

3. The 400+ businesses that essentially told Georgia, "This is a terrible idea."

Discrimination is bad for businesses. Period.

That's why companies like Microsoft, Unilever, and Delta (which employs more than 30,000 Georgians) spoke out against Georgia House Bill 757, which would allow faith-based organizations to refuse education, charitable, or social services based on religious beliefs relating to marriage. The bill passed last week, but Gov. Nathan Deal says he will veto it.

Founder of Virgin Group Sir Richard Branson was one of the executives who publicly denounced House Bill 757. Photo by Frazer Harrison/Getty Images.

4. The Missouri Democrats who broke a record filibustering an anti-LGBT bill.

The eight members of the Democratic caucus began their filibuster on Monday, March 7, around 4 p.m. It continued for 39 hours into Tuesday evening, breaking a state record. It was done to prevent the passage of SJR 39, a bill that would write discriminatory language into the Missouri constitution.

The herculean effort made national news, and presidential candidates Bernie Sanders and Hillary Clinton tweeted their support. The filibuster worked temporarily, but the legislative session runs through May.

5. The Utah state senator who coughed and sneezed his way through a mini-filibuster.

When the legislature tried to rush a vote on an anti-LGBT bill with just three minutes left in the legislative session, state Sen. Jim Dabakis was having none of it. Instead, Dabakis, the only openly gay member of the Utah legislature, did what any hero in plain clothes would do: He stalled.

When it was his turn for the voice vote, Dabakis coughed, sneezed, and appeared to ponder his decision. Though the Senate president caught on and moved the vote along, it was too late and the bill was defeated.

You can see the vote and hear Dabakis' cheer-worthy stall in the video below.

All of these fearless acts of patriotism have taken place in the past month.

Coast to coast, the battle for equality and civil rights continues. Consider this is your wake-up call. But you don't need to be a local politician or business owner to make a difference.

You can help right now.

Vote. Speak up when you see discriminatory bills get traction in your city or state. Vote. Keep up with local news. Vote. Try not to get distracted by the glitz and gossip of the presidential election, as ordinances and laws passed locally have just as much — if not more — impact. Oh, and vote. Every election. Every time.

Because nothing, especially hate, beats an engaged, active citizenry.

Jason Smith, the principal of Stonybrook Intermediate and Middle School in Warren Township, Indiana, had an insecure child sent to his office recently, and his ability to understand his feelings made all the difference.