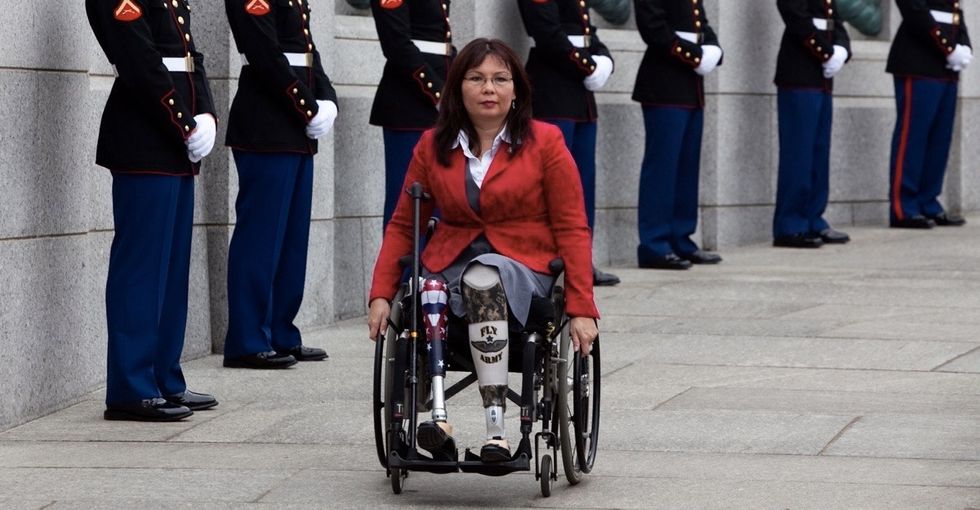 Sen. Tammy Duckworth (D-Illinois) knows a thing or two about the military.

In 2004, while enrolled with the Illinois Army National Guard's Reserve Officers' Training Corps, Duckworth was called up and deployed to Iraq. She participated in a number of combat missions as the pilot of a Blackhawk helicopter before being shot down by a rocket-propelled grenade. As a result, she lost both legs and partial use of her right arm.

After recovering, she put her focus into Veterans Affairs activism, eventually landing the title of assistant secretary for public and intergovernmental affairs in the U.S. Department of Veterans Affairs. In 2012, she ran for Congress and won. In 2016, she ran for Senate and won.

This photo from 2010 shows Duckworth when she was assistant secretary for Public and Intergovernmental Affairs at the Department of Veterans Affairs. Photo by Brendan Hoffman/Getty Images.

When Donald Trump, a man who received five draft deferments during the Vietnam War, attacked transgender service members, Duckworth responded as only she could: from experience.

With reports circulating that the trans military ban, first announced via tweet in July, is making its way through official channels and inching closer to becoming reality, Duckworth shared a blistering note on Facebook about unit cohesion, trust, and national security.

When I was bleeding to death in my Black Hawk helicopter after I was shot down, I didn’t care if the American troops...

"When I was bleeding to death in my Black Hawk helicopter after I was shot down, I didn’t care if the American troops risking their lives to help save me were gay, straight, transgender, black, white or brown," she wrote. "All that mattered was they didn't leave me behind."

"If you are willing to risk your life for our country and you can do the job, you should be able to serve — no matter your gender identity or sexual orientation. Anything else is not just discriminatory, it is disruptive to our military and it is counterproductive to our national security."

Perhaps a war hero like Duckworth can get through to Trump.

So far it hasn't been enough for him that the Department of Defense commissioned a 112-page report on the effects of allowing trans people in the military, finding that there weren't any financial or medical reasons to ban them.

Maybe there's hope that the voices of actual trans people who have served in the military might sway the president's mind or that he can be convinced by his own words, which extolled the virtues of the military's "shared sense of purpose" that transcended our differences, adding, "All service members are brother and sisters."

If all that fails, however, Duckworth is prepared to push for legislation that takes this decision out of his hands.

"If the President enacts this ban, which would harm our military readiness, the Democratic and Republican Members of Congress who oppose this discrimination must enact legislation that prevents it from taking effect," she says at the close of her statement."

There's no telling whether such a bill would have a shot of making it through Congress and avoiding a veto, but there's hope. After all, a surprising collection of otherwise conservative lawmakers stepped forward to criticize Trump's ban the day he tweeted it out. They may soon have the opportunity to take it beyond simple words and show their support through action.