Patton Oswalt and his fans transformed a Twitter troll's life with a simple but powerful act of kindness. 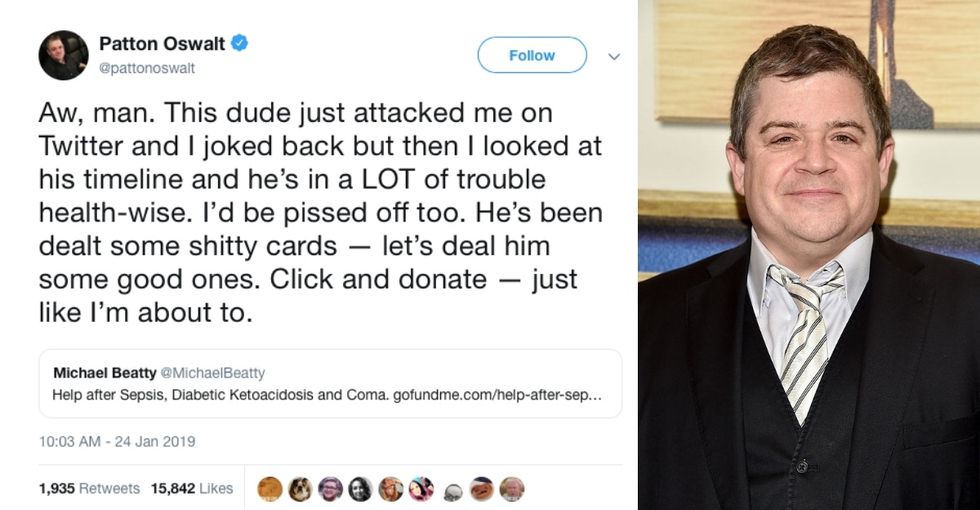 Actor and comedian Patton Oswalt has made a name for himself off screen as a blunt yet caring, compassionate human. His raw openness after his wife's unexpected passing and his willingness to engage in conversations about depression and dadhood after her death has touched people's hearts and opened people's minds.

And once again on Twitter, Oswalt has proven that he is unquestionably one of the most kind-hearted dudes in Hollywood.

Oswalt shared that a man who attacked him on Twitter needed help, then encouraged people to help him.

Twitter user Michael Beatty had replied to Oswalt's response to one of Trump's tweet with "I just realized why I was so happy you died in Blade Trinity!" and "And you shoot basketball ike [sic] the sawed off little man you are."

Rather than let endless insults fly back and forth until someone finally gave up, as is Twitter tradition, Oswalt dug a bit deeper and came up with this gem:

"Aw, man," he wrote. "This dude just attacked me on Twitter and I joked back but then I looked at his timeline and he’s in a LOT of trouble health-wise. I’d be pissed off too. He’s been dealt some shitty cards — let’s deal him some good ones. Click and donate — just like I’m about to."

Beatty, a Vietnam veteran, had shared a GoFundMe describing a recent, harrowing two-week hospitalization battling sepsis, a potentially fatal blood infection, and struggles in managing his diabetes throughout. When Oswalt saw the link, he shared it with his followers and encouraged people to donate to this man who'd had nothing but nasty things to say to him.

As of the writing of this article, the GoFundMe has raised almost $13,000. Beatty responded with a humble, sincere message for Oswalt:

@pattonoswalt Patton. You have humbled me to the point where I can barely compose my words. You have caused me to t… https://t.co/r0BxQrTnUY
— Michael Beatty (@Michael Beatty) 1548354932.0

"Patton," he wrote. "You have humbled me to the point where I can barely compose my words. You have caused me to take pause and reflect on how harmful words from my mouth could result in such an outpouring.  Thank you for this and I will pass this on to my cousin who needs help. A cascade."

Beatty followed that up with another tweet thanking everyone who donated:

I want to thank everyone who came to my aid with generous outpourings- and also to @pattonoswalt without whom I wou… https://t.co/rtdeDyLmLj
— Michael Beatty (@Michael Beatty) 1548356028.0

People have responded to Oswalt's kindness and Beatty's response with hope that such actions may change people's hearts.

And Oswalt, always the jokester, responded to Beatty's Tweet with sarcastic humor.

Keep up the awesome humaning, Patton Oswalt. We need more of you in the world.