Next time your kid asks 'What's the point of school?' Dr. Skateboard has the answer. 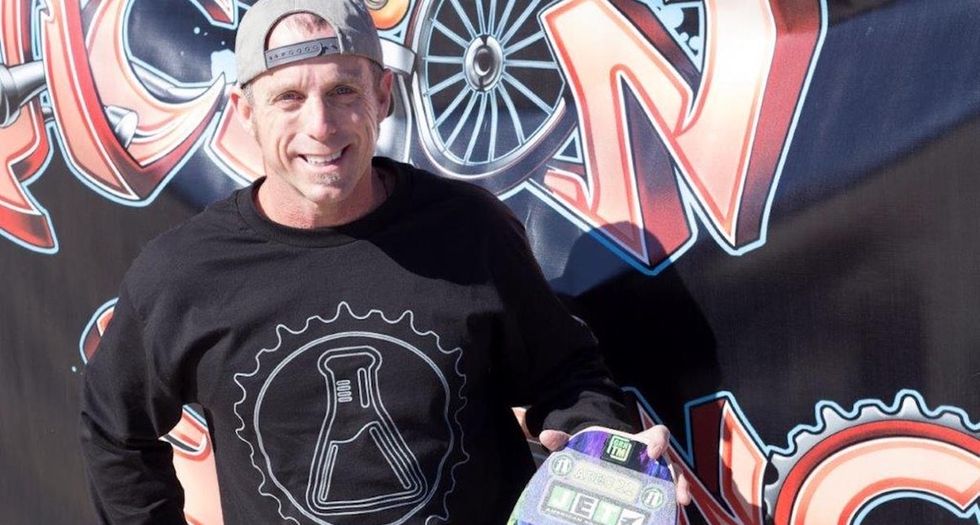 Teachers in El Paso, Texas, have a secret weapon. His name is Dr. Skateboard.

In a perfect world, the morning school bell would ring and every child would snap to attention, ready and enthusiastic to learn. But of course, nothing is perfect.

In reality, kids come with all styles and levels of enthusiasm for learning — only a few of which are actually to sit down and pay attention to the lesson.

More and more, researchers are finding that interactive lessons are the way to go when it comes to capturing the attention of an entire classroom of children. That's why teachers call up Bill Robertson — or, as the kids call him, Dr. Skateboard.

"I started skateboarding when I was 13," says Robertson, whose title stems from the fact that he does, in fact, have five academic degrees, one of which is a doctorate in education. "I was a high school and middle school teacher for a little while, and I started thinking about ways I could make my class more engaging," he says. "Any time I brought in my skateboard, kids got more interested."

All photos courtesy of Dr. Skateboard, used with permission.

Not only is Robertson now a professor, but he also skates around the world teaching kids (and adults!) lessons in science, technology, engineering, and math.

According to Robertson, skateboarding is the perfect vehicle for lessons in STEM because it incorporates so many of the forces that act on most things.

"The balance of those forces is how you make things fly," he says. When kids pile into the auditorium to watch Robertson skate, they no longer have to imagine their physics problems — they get to see them in action. "Whether it’s an airplane or a skateboarder doing an ollie, you can demonstrate those principles through skateboarding."

So, as Robertson soars into the air, he explains exactly how forces like gravity, momentum, and lift help him takeoff and land safely on the ground — while also putting on a show.

But lessons aren't all about science. Robertson also carries an important message about engaging in learning itself.

Especially to kids with other passions (like skateboarding), school can seem like a chore that keeps them from doing what they really want to do. "By bringing Dr. Skateboard together, I give kids the idea that you can have activities and pursue your education," he says. Robertson works to show kids with all sorts of interests how to become lifelong learners by finding the academic concepts that lie hidden in activities that take place outside the classroom.

"You just try to present content in ways people may not have thought about it," he says. "Whether you’re skateboarding or doing some other kind of activity you really enjoy, it’s a matter of breaking those activities down to see where the concepts lie." For a musician, that could be the physics of sound. For an artist, the chemistry of color.

He also teaches kids about work, showing them that whether it's skating, school, or something different, it takes the same skills to be good at anything.

As a skateboarding doctor, he's uniquely positioned to convince kids that, truly, athletics and academics aren't all that different. Everything takes hard effort.

"Persistence, practice, patience, creativity, tenacity, goal-setting — they’re also the same things you do in your education," he says. "So if you have success in something you like, you can bring that into your education."

His programs speak to adults, too — parents and teachers who may be tempted to write off kids who don’t seem interested in learning. "By being a doctor, I can appeal to teachers and parents and decision makers and say don’t marginalize kids who are into these activities. Because they may have the attributes to become a Ph.D."

Though Dr. Skateboard makes appearances around the world, parents and teachers can learn from his methods without seeing him in person.

Robertson encourages adults to take their own natural interests and talents and use them to show kids how education is in everything — no matter how unconventional it may seem.

But, he warns, the key is not to feign interest in something that even you think is boring.

"Kids especially can tell when you’re being real," he says. "They may or may not be into what you’re doing but they can respect that authenticity."

So if you hate billiards, don't try to teach geometric angles over a pool table. But if you're teaching something you love, just like Dr. Skateboard, you might just end up passing that passion along.

Bill Gates has always been passionate about providing vaccines to the parts of the world that lack resources. On Friday he came through again by announcing that the Bill and Melinda Gates Foundation is committing $150 million toward efforts to develop and distribute a low cost COVID-19 vaccine to some of the poorer countries of the world.

According to Vox, this latest financial commitment brings the total Gates has dedicated to the pandemic to around $500 million. He is hoping the funds will keep vaccine costs down to increase accessibility beyond just the wealthier populations. As Gates told Bloomberg, "We're trying to make sure we can end it not just in the rich countries." Gates is working with the Serum Institute, which is the most prolific vaccine producer in the world, to make $100 million doses that would not exceed $3. In general, companies producing the vaccine have agreed to keep the profit margin low."