Lady Gaga gave an emotional Grammys speech about mental health we all need to hear. 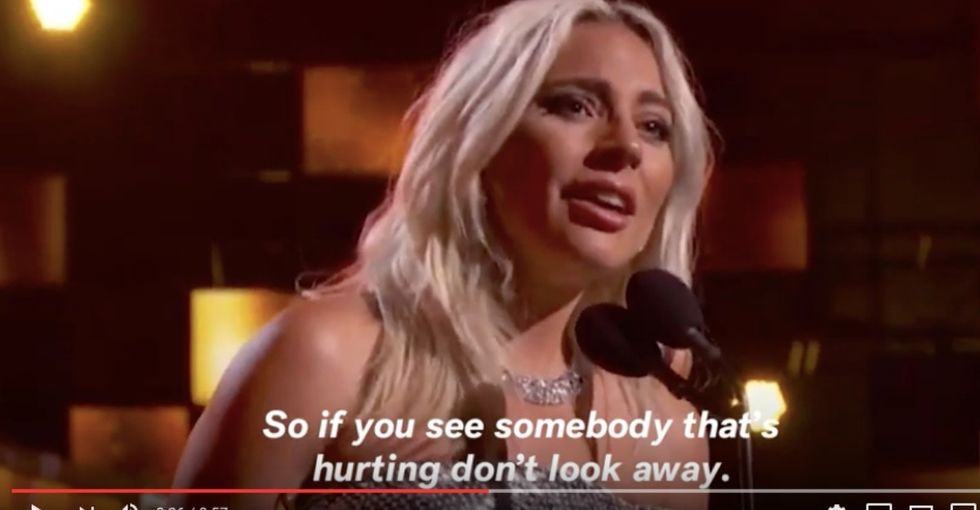 Lady Gaga used her moment in the Grammy spotlight to plead for mental health awareness and help.

Artists at award shows often grab the opportunity with a large, captive audience to shed light on issues that are important to them. Last night, Lady Gaga used hers to address an issue that's near and dear to her heart.

Lady Gaga, who won three awards at last night's Grammys, gave an emotional speech highlighting the fact that so many people struggle with mental health issues without getting the help they desperately need.

"I'm so proud to be a part of a movie that addresses mental health issues," she said, referring to her role in "A Star is Born."

"They're so important. A lot of artists deal with that, and we've got to take care of each other."

It's not only artists who struggle with mental health. According to the National Alliance on Mental Heath, 1 in 5 adults in the U.S. experiences a mental illness in any given year. Additionally, 1 in 5 youth aged 13–18 experiences a severe mental disorder at some point during their life.

"If you see somebody that's hurting, don't look away," Gaga continued. "And if you're hurting, even though it might be hard, try to find that bravery within yourself to dive deep and go tell somebody and take them up in your head with you."

The "A Star is Born" star speaks from her own personal experiences with mental illness.

Gaga's character in "A Star is Born" was in a relationship with an alcoholic who struggled with depression and ultimately died by suicide. But the singer-turned-actress superstar has also talked about her own mental illness struggles openly in interviews and other speeches.

In a speech at the SAG-AFTRA Foundation Patron of the Artists Awards in November 2018, Lady Gaga spoke candidly about her experiences with "disassociation and PTSD" and how she finally sought professional help and developed a mental health support team. She said her initial symptoms “later morphed into physical chronic pain, fibromyalgia, panic attacks, acute trauma responses, and debilitating mental spirals that have included suicidal ideation and masochistic behavior.”

Many people who struggle with mental health issues don't seek help because of the stigma surrounding mental illness. They may worry that people will think they're "crazy" or weak. They may worry that they will be discriminated against if they share their health problems openly.

But bringing mental health out of the shadows is really the only way to battle the stigma. When people share what they've been through and how they're managing their mental health issues, it helps people feel more comfortable seeking help. Thanks to Lady Gaga for continually bringing these issues into the light.

The 95-year-old's 'bold, creative decision' to die on Thanksgiving when the whole family was at her house led to this chaotic masterpiece.

A viral video tells a wild, oddly hilarious tale of a guy's aunt dying on Thanksgiving.

A loved one dying on a holiday isn't normally something to laugh about, but there are exceptions to every rule. This video is one of them.

TikTok user Darien (@dairy.n) shared a story about his family's Thanksgiving Day that is so gloriously bizarre and delightfully real, it's hard not to laugh, despite the fact that it's about his aunt dying. The fact that he tells the tale in the style of a "One thing about me" rap is extra hilarious, and judging by the comments of some of the 6.7 million people who've watched it, it's struck people's funny bones.

Dark humor? A little bit. But his aunt was 95 and she died of natural causes, which helps the hilarity feel not quite so inappropriate. She also apparently had a fabulous sense of humor that she used to cope with her own difficulties throughout her life, so the video is more like a fitting tribute than a what-the-heck storytelling.

Odds are you’ve probably seen those Lensa AI avatars floating around social media. You know, the app that turns even the most basic of selfies into fantasy art masterpieces? I wouldn’t be surprised if you have your own series of images filling up your photo bank right now. Who wouldn’t want to see themselves looking like a badass video game character or magical fairy alien?

While getting these images might seem like a bit of innocent, inexpensive fun, many are unaware that it comes at a heavy price to real digital artists whose work has been copied to make it happen. A now-viral Facebook and Instagram post, made by a couple of digital illustrators, explains how.

Keep ReadingShow less
art
Get stories worth sharing delivered to your inbox
By signing up you agree to Upworthy's privacy policy.
Trending Stories
kindness
Joy