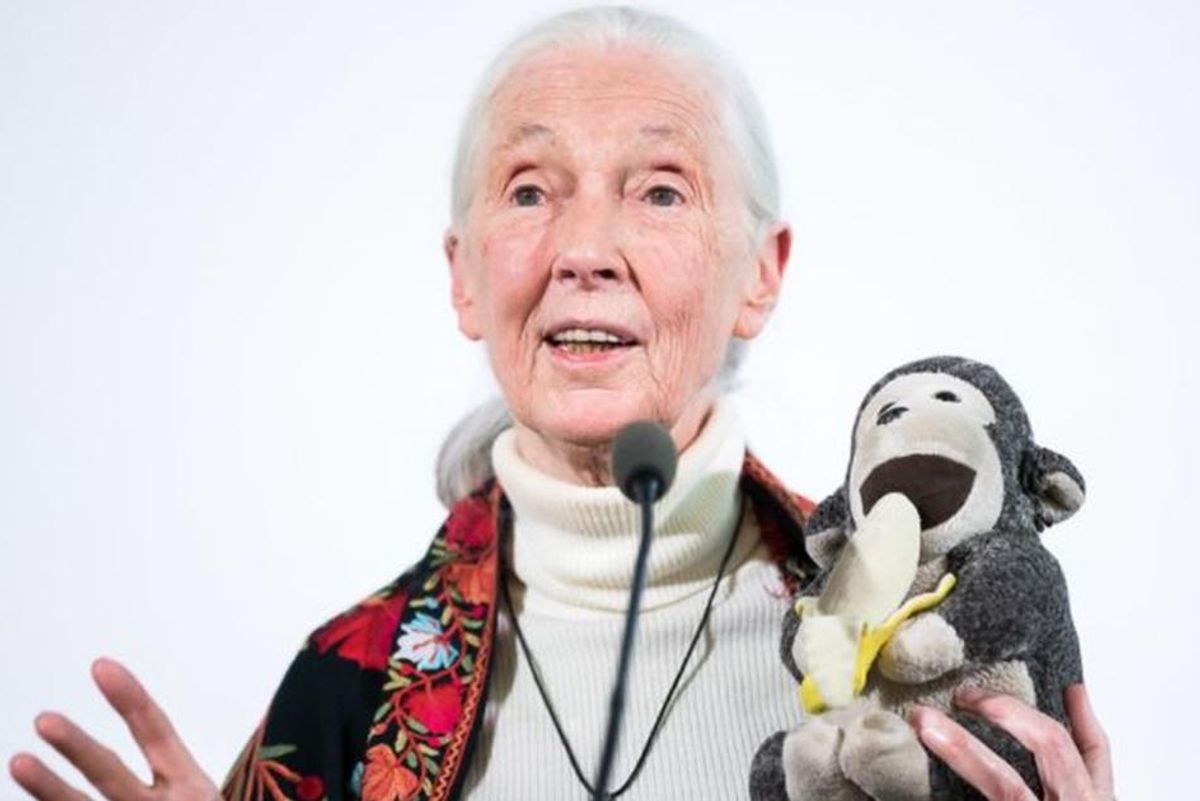 Primatologist and anthropologist Dr. Jane Goodall, 86, has lived an incredible life that's been defined by her ability to bridge the gap between humans and the animal kingdom.

Most notably, her work studying chimpanzees up-close in the Gombe Stream National Park in Tanzania from 1960 to 1975 changed how people perceive what it is to be human and chimpanzee.

After documenting chimpanzees using tools in 1961, the discovery was so Earth-shattering it prompted her mentor, anthropologist, and paleontologist, Dr. Louis Leakey, to make the bold proclamation: "Now we must redefine tool, redefine Man, or accept chimpanzees as humans."

Since she has gone on to found the Jane Goodall Institute UK and the Roots & Shoots program where tens of thousands of children in 100 countries work together to make the world a better place.

Her monumental accomplishments are even more incredible being that she began her career at a time when women faced an uphill battle in the world of science, and many dissuaded her from going into the jungle.

"Everybody laughed at me and said that I'd never get there. It was far away, we didn't have money, and I was just a girl," she told our partner site, GOOD, last year.

In a recent profile for the Wall Street Journal, Goodall was asked her advice for those who wish to follow in her footsteps by going where they've been told they shouldn't.

"Follow your dream, follow your passion, do what you're passionate about. When I dreamed of Africa when I was 10 years old, everybody laughed at me: How will you get by? You don't have money. (It was wartime.)You're just a girl," Goodall said.

But she had incredible support from her mother, who probably had no idea at the time that her prodding would help inspire generations of women and scientists to push boundaries.

"Mum said, 'If you really want something like this, you'll have to work terribly hard. You'll have to take advantage of all opportunities. And if you don't give up, maybe you'll find a way,'" Goodall recalled.

As someone who was told to know her place in the world, her advice is important for those who are told they cannot achieve their dreams because of who they are.

"That's the message I take to young people all around the world, particularly in deprived areas," she added. "So many people have said or written, Jane, I want to thank you because you taught me, because you did this, I can do it too — meaning follow your dreams."

Now, for the rest of us who may not want to spend decades alone in the jungle observing nature, Goodall has advice on how everyone can help make the planet a better place.

"Every single day we live, we make some impact on the planet and we need to make ethical choices, thinking about the consequences on future generations," she told GOOD. "What do we buy, eat, wear? Where did it come from? That will start moving us towards a better world."

After 86 years of being on one of the most incredible adventures of the past century, Goodall seems to have two ideas that she believes are paramount: persistence and consciousness.

She believes everyone should be persistent in the pursuit of their dreams while also living a conscious life, focusing on how their day-to-day decisions have an impact on the future of the planet.

From Your Site Articles
Related Articles Around the Web
nature
Culture