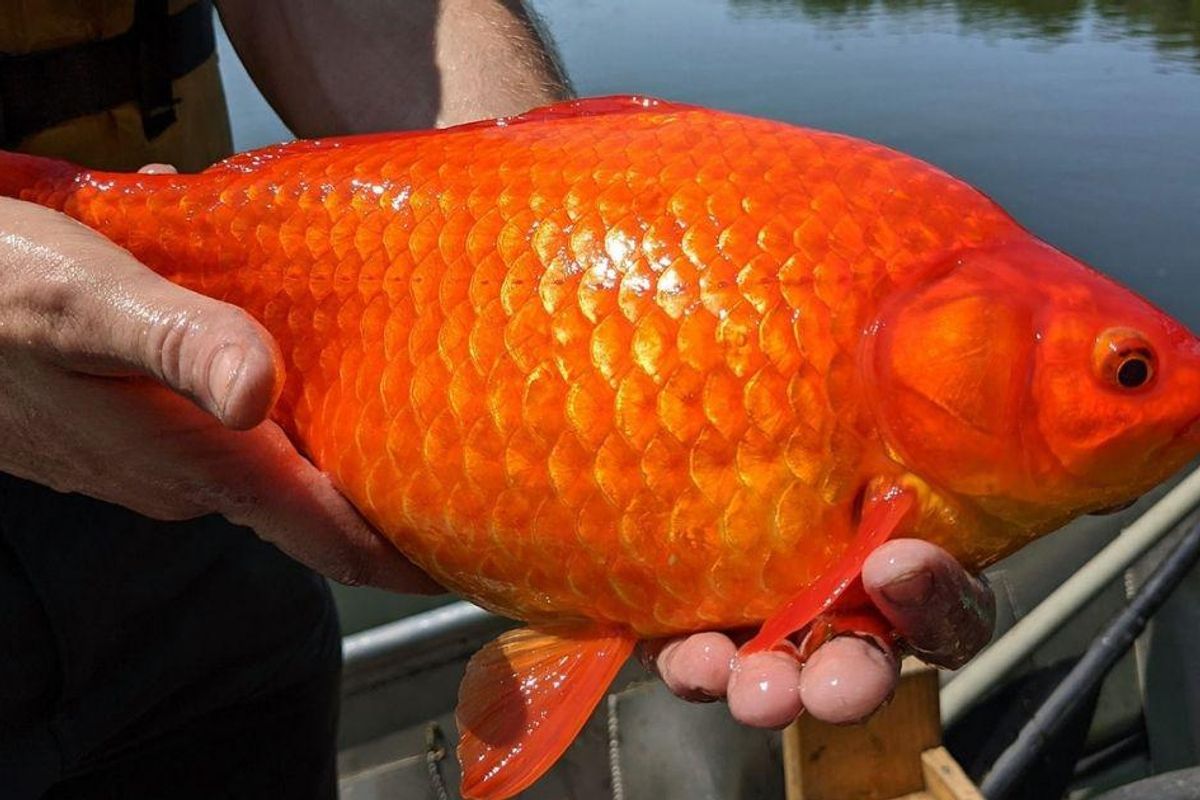 A Minnesota city has issued a notice to residents to please stop releasing their unwanted pet goldfish into local lakes and ponds because they are turning into Frankenfish and messing with the natural order of things.

Okay, they didn't say Frankenfish, but take a look at the monstrous size of these goldfish. Not exactly the little fishbowl friends you find at the fair.

The city of Burnsville, Minnesota posted the plea on Facebook and Twitter, explaining what a recent fish survey had found in a local lake. "Large groups of goldfish have been observed in recent years on the lake. At high populations, goldfish can contribute to poor water quality by mucking up the bottom sediments and uprooting plants," the post said.

"You see goldfish in the store and they're these small little fish," Caleb Ashling, Burnsville's natural resources specialist, said in an interview, according to MSN. "When you pull a goldfish about the size of a football out of the lake, it makes you wonder how this can even be the same type of animal."

There's a common myth that goldfish will only grow to the size their enclosure allows. While there is some truth to that, according to Tropical Fish Magazine, the limited size of at-home goldfish has more to do with water quality than aquarium size. The reality is that common goldfish can grow very large in size—up to 18 inches—and their impact on ecoystems they aren't designed for can be significant.

"A few goldfish might seem to some like a harmless addition to the local water body – but they're not," wrote the Minnesota department of natural resources earlier this year.

The city of Eagan, Minnesota, has experience with the problems invasive goldfish can cause. Several. years ago, some goldfish dumped into a pond at Eagan's Central Park resulted in a population spun out of control, which muddied the waters and harmed native plants. It took three years of effort and a great deal of expense to rid the pond of the issue.

"We tried netting them out," Koehle says, "and we got thousands of them, but we couldn't get them all," said Eagan water resources specialist Jessie Koehle, according to Minnesota Conservation Volunteer magazine. Eventually, we had to use rotenone to reclaim the pond, killing all the fish and starting over."

"It can be a pain to figure out what to do with a goldfish that you don't want," Koehle said. But releasing them into a lake or pond isn't the best solution, even if it seems like the kindest one. It's also against the law to introduce fish into bodies of water where they don't naturally live.

The city of Burnsville recommended that people rehome pet fish with responsible caregivers rather than release them out into nature. That's good advice for fish owners no matter where you live. One little fish may not seem like a big deal, but when it results in an explosion of an invasive species, it can wreak havoc on ecosystems and cause real harm to other living things. If your fish didn't come directly from the pond or the lake you're looking at, don't put it there. Keep pet fish in tanks, and keep the balance of nature intact.

From Your Site Articles
Related Articles Around the Web
nature
popular