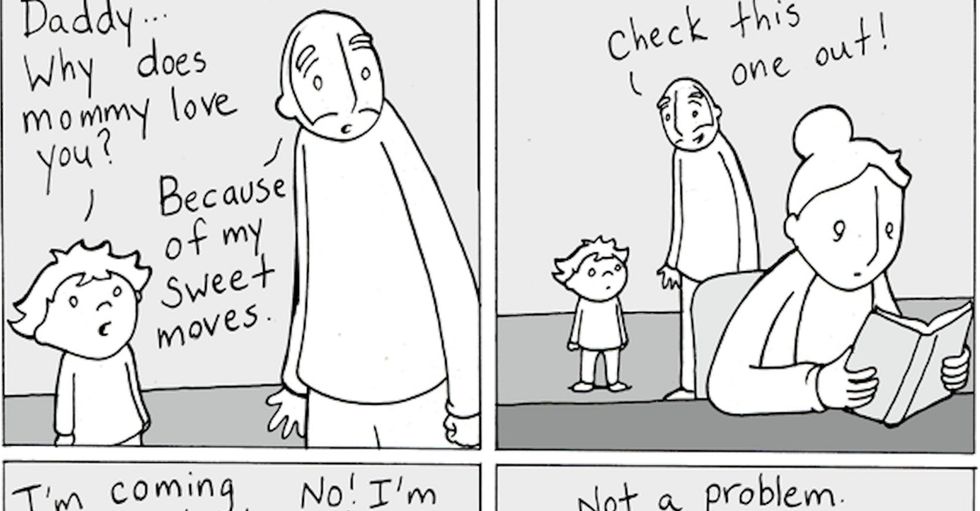 This article originally appeared on 08.12.19

Christopher Grady, a father and teacher from Toronto, was struggling with anxiety and depression. That's when he started drawing.

He describes his early cartoons and illustrations as a journal where he'd chronicle everyday moments from his life as a husband, elementary school teacher, and father to two kids.

"I needed a positive place to focus all my thoughts and found that when I was making comics I felt a little bit better," he says.

He began putting a few of his comics online, not expecting much of a response. But he quickly learned that people were connecting with his work in a deep way.

The comics series called Lunarbaboon was born, and the response to the first few was so powerful that Grady was inspired do more with his comics than just document his own experience.

"I began getting messages from many people about how they connected to the comics and it gave them hope and strength as they went through their own dark times," he says.

"When they look back ... they probably won't remember what was said ... or where you were when you said it. They may not remember any details of your time together. But they will remember that you were there ... and that's what matters most." All images by Christopher Grady/Lunarbaboon, used with permission.

"Usually the circle of people we can support, help, influence is limited to our families, friends, coworkers, random stranger at the bus stop, but with my comic I suddenly found my circle of power was much much larger," Grady explains. "I guess I decided to use this power for good."

Grady continued to draw, making a point to infuse the panels with his own special brand of positivity.

"Kids are always watching adults and they look to the adults as role models," he says. "I try to show (my kids and students) that even with all my flaws and weaknesses I am still a good person and I can still make a positive change in the world."

Lunarbaboon comics tackle huge, important subjects with an effective, lighthearted touch that you can't help but smile at.

Check out Grady's take on teaching his son about consent.

Here's one about parents being supportive of a gay son or daughter.

On raising girls in a patriarchal world.

And here's a sweet one about appreciating the heck out of his wife.

As Lunarbaboon has continued to grow, Grady says the messages of support he gets have become increasingly powerful.

He certainly doesn't claim to have all the answers to all the complexities of parenting, but he does say that "people like knowing they aren't alone in life's daily struggles. Most people who contact me just want to say thank you for putting something positive into the world."

Grady doesn't expect his Lunarbaboon comics to fix rape culture or end bigotry. He just hopes his message of love, inclusion, and positivity continues to spread.

"My hope is that for the short time people read it they smile and feel good," he says. "Then I hope they take that good feeling and smile into the world and make it slightly brighter."

You can check out even more of Grady's awesome work over on his website or in his newly published book.

This article was originally published on November 30, 2017.