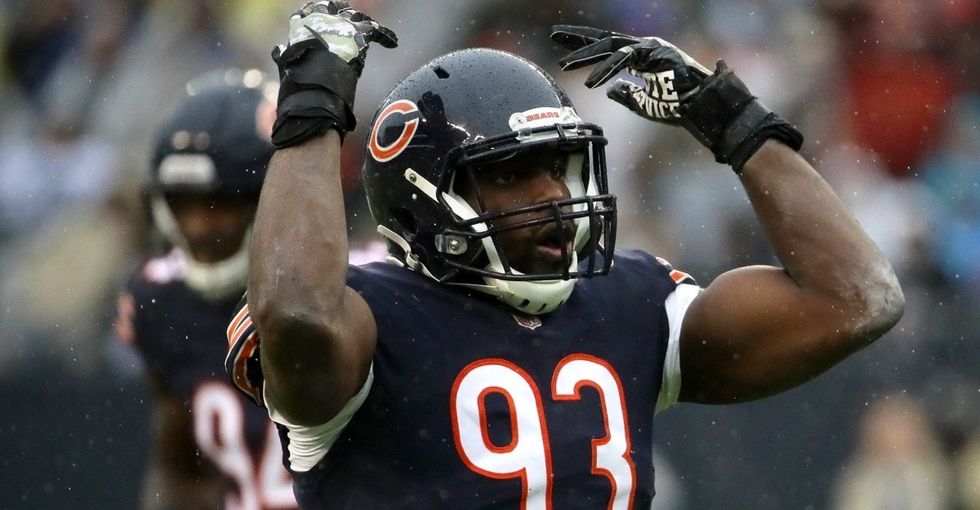 Ahead of the 2018 season, the NFL announced a new rule designed to put a stop to silent protests during the national anthem.

The new rule sparked outcry, with some accusing the NFL of corporate censorship in an effort to shut down protest and others (including Donald Trump) saying the league didn't go far enough.

The NFL Players' Association (NFLPA) released a statement expressing disappointment that the league didn't consult them before implementing this new rule. On the other hand, President Trump said that while he agrees with the new rule, "maybe [players who stay in the locker rooms] shouldn't be in the country."

One of the most thoughtful responses to the new rule came from Chicago Bears linebacker Sam Acho, who pledged to keep fighting for what's right.

"Obviously, from the beginning, no one's intent, and no one's purpose, was to disrespect the flag," Acho said in a statement first reported by NBC 5 Chicago's Mike Berman.

Acho went on to note that the purpose of the protests have always been to take a stand against the police brutality facing people of color, recommitting himself to finding "a way to stand up for people who are being unjustly treated, find a way to stick up for justice in whatever way, shape, or form you can possibly do it."

When it comes to the question of whether he's OK with the new rule, he proposed a different question for himself and other players: "What do you do now?"

"Obviously, the protests have brought a ton of awareness to the abuses of power that are going on in our country, and I think that was a great method to start our conversation. And now ... we're seeing action," he wrote, noting that he, his teammates, and many others in the NFL are putting time and money towards off-field activism work.

It's been nearly two years since Kaepernick took a knee, and we're still talking.

"I think a lot of players are happy about the conversations that are happening. So the protests served their purpose," Acho concluded:

"And if guys still want to protest, obviously the ruling is if you don't want to stand for the anthem, according to the owners, you can stay inside. ... I will say we continue to do what we're doing and speak up for those who can't speak for themselves."

It's easy to ignore the underlying issue being protested, to smear players as spoiled, and to argue that they should do more off the field if they actually care about these issues.

The truth is that, as Acho and the NFLPA have said, players do do a lot of work off the field to help their communities and to fight for causes they believe in.

Kaepernick donated a million dollars to charity and traveled across the U.S. helping people out. Veterans around the country have come out in support of the expression of free speech shown in these pre-game protests, even if they don't necessarily agree with the cause or the method.

As Acho said, though, the new rule is what it is. The real question is how NFL players — and the rest of us — can help continue this conversation and work for a better world.

After all, there's nothing more patriotic than working to make your country a place where we are all truly equal.