Abortions are illegal in Ireland. Here's what 2 women went through to get one.

This journey has been made by too many women, and it's got to stop. 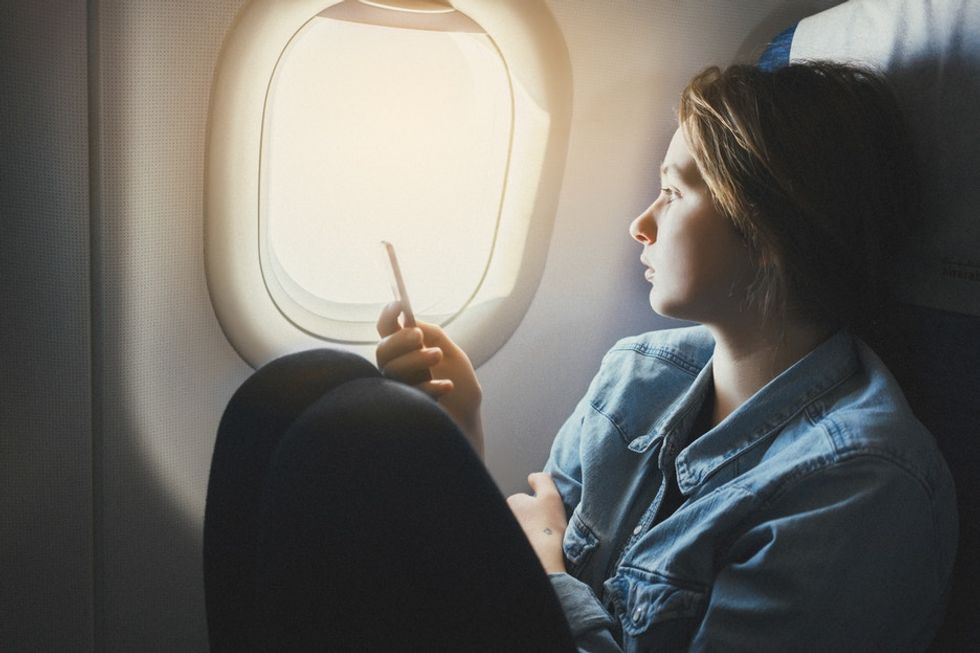 On Friday, Aug. 19, at 6 a.m., two women departed for a weekend trip from Ireland to Manchester, England. Their trip wasn't a fun getaway; it was for an appointment with a doctor that couldn't be made in their home country.

One of the women needed an abortion, and she couldn't just walk or drive to her nearest clinic to procure one because abortions have been illegal in Ireland since 1983.

The only instance in which a person may access a legal abortion in Ireland is if the pregnancy poses a threat to her life. Even with that caveat, however, there have been cases of women dying in Irish hospitals after being refused abortions.

While there have been several attempts to repeal Ireland's Eighth Amendment, which protects "the life of the unborn," it remains in effect to this day. As such, an estimated 165,000 women have traveled out of country to have the simple procedure done, with an estimated 5,000 making the trip each year.

Using the handle @TwoWomenTravel,  the pair decided to document their experience on Twitter.

"We made this journey in stern solidarity with all our Irish sisters who have gone before us," they tweeted.

We stand in solidarity with all women exiled by @EndaKennyTD, his predecessors, his apologists. #twowomentravel https://t.co/lipWBwdViA
— Two Women Travel (@Two Women Travel)1471675934.0

Many of their tweets include the handle of the prime minister of Ireland, Enda Kenny, who has been actively impeding the referendum to repeal the Eighth Amendment, though he's not the only obstacle.

Women's reproductive rights have been kept under the Irish government's thumb for far too long, and Irish women are done being silent.

In this tweet from the waiting room at the clinic, the women note that in a world where abortion is safe, legal, and accessible, they would've been home by noon.

Now a waiting room,weighted by bated breaths.@EndaKennyTD we could be home by noon in another world. #twowomentravel https://t.co/1Sqytx6pgM
— Two Women Travel (@Two Women Travel)1471683246.0

Instead, they had to travel to another country, where they were running on little sleep and food just so one of them could access an abortion — a medical procedure that is statistically safer than colonoscopies, hernia surgery, and yes, even childbirth.

For all the conversation around abortion — for or against — there is often little insight provided as to what the process of getting an abortion is actually like. The Two Women Travel Twitter account provides a brief glimpse showing the journey and the procedure for what it is and the injustice of the obstacles women face and the relief of being able to access the abortion itself.

When the abortion was done, they tweeted a photo of the sheets with some light bloodstains — a reminder that, while abortion is a safe procedure with a short recovery time, it is still a medical procedure. For those who have to travel long distances to access them, that means a long, unnecessary, and often uncomfortable journey home.

Soon after they began tweeting their journey, their story went viral.

Overnight, @TwoWomenTravel racked up thousands of followers. Even if you only read a few of their tweets, you'll understand why.

Last year, Roisin Ingle, editor for the Irish Times, told her own abortion story, which also involved traveling to England, in an op-ed for the publication. Needless to say, she's been an avid supporter of @TwoWomenTravel.

The world talking about how our country fails women & girls. Thanks #TwoWomenTravel for doing this. #repealthe8th https://t.co/GVNwwwnbcA
— Roisin Ingle (@Roisin Ingle)1471691485.0

And Irish actress Tara Flynn was right behind her.

These restrictions on women's reproductive rights are not limited to Ireland, which is why this publicized pilgrimage is hitting home across the world.

You want to know who the #twowomentravel are? Your best mate. The girl you sat in front of in school. Your ex. Your sister. #repealthe8th
— sarah maria griff (@sarah maria griff)1471686689.0

Has their mission received tons of backlash? Of course. However, what often follows dissonance is a decided movement forward.

Even though Prime Minister Kenny has yet to respond, all eyes are on Ireland now and, hopefully, saying "no" won't be so easy this time.

Most people would rank their parents among the most important and closest relationships in their lives. But how many of these relationships are rooted in feelings of guilt for being cared for as children versus a genuine feeling of love and respect?

How many children are held back in life because they feel obliged to remain obedient to an authoritarian parent well into adulthood?

Lisa Pontius, a mother on TikTok, has caused a stir on the platform by asking people to reconsider their relationships with their parents. Even boldly proclaiming that kids "Don't owe their parents" anything.