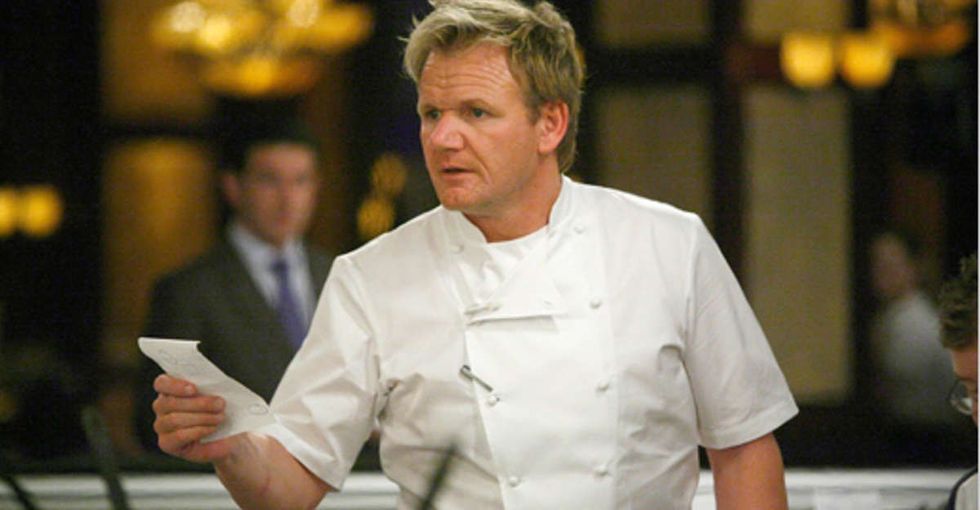 His whole TV persona is based on being the world's worst boss.

Earlier this week, Ramsay went on Reddit and allowed users to ask him any question they wanted.

So when a fellow cook asked him a sincere, deeply personal question about what to do when you've hit a roadblock in your career, you could probably guess what was coming.

Indeed, I thought the guy was making a terrible mistake pouring his heart out to a chef as notoriously tough as Ramsay:

"My hopes and dreams are nowhere to be found as I scale and portion salmon after salmon, shelling pods after pods of broad beans.
...
Sometimes I look out the tiny window and I can see people walking around the streets, enjoying the sunlight, while I'm here, questioning my dedication to this art as I rotate stock in the cool room, getting frost bitten, but the fear of the chef stops me from stepping outside to warm up.
...
The closest thing to feeling any kind of joy I get is those rare moments when I walk through the dining room near the end of service to get some coffee for everyone, and there will be a few diners left, idly sampling those little petite fours that we've painstakingly ensured are all perfectly round, identical, and just plain delicious. Then, one of them will stop the conversation they're having with their company, look up from their food and say, 'Thank you, chef. This is delicious,' and making the previous 14-hours of sweat and tears kind of worthwhile.

But the way Ramsay responded? Totally amazing. And completely unexpected.

Turns out, real-life Gordon Ramsay? He actually can be a really kind, big-hearted dude.

Working in restaurants is a tough, tough business. As of 2012, the average salary for cooks was less than $23,000/year. And those who are just starting out often have to work unglamorous, tedious jobs that no one else wants to do. Ramsay didn't have fancy culinary school training. He rose up through the ranks putting in long hours for low pay in kitchens all over the world. That's why he gets it.

Which brings up another point.

(Does this salad dressing have black pepper in it?? No tip for you!)

Of course, no one likes getting the wrong order. Or waiting a really long time for a meal. Or eating something that doesn't taste the way you expect it to.

But it's important to remember that the people behind the food, like Ramsay's anonymous letter-writer, might be working 14-hour days. Or might be a recent immigrant who speaks limited English, trying to support a family thousands of miles away. And possibly making very little money. And sure, they screw up sometimes. But we all screw up at our jobs sometimes.

Because they, like the rest of us, are human beings.

Which is why saying...

"Thank you, chef. This is delicious."

Could mean everything to someone.

It's a cat toy, people. Deal with it.

Kids have relentless curiosity and imagination galore. That magical quality often catches adults off guard in the most hilarious of ways.

Tennis pro Serena Williams recently posted a video to her TikTok showing her 5-year-old daughter Olympia (who is the spitting image of her mother, by the way) playing with a “toy” for their cat Karma.