A protester was handed this lollipop at the March for Our Lives. The reason is chilling. 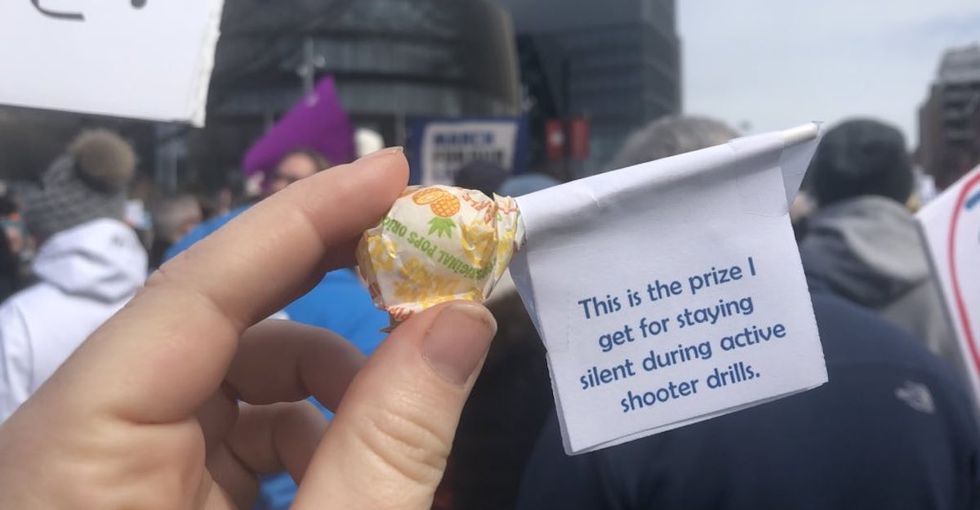 In the second grade, a dentist pulled my tooth with no anesthetic. It had been hanging by a thread, and while I remember the pain being immense at the time, it was quickly subdued by a visit to the dental office's toy box, where I found a sticker and a small bottle of bubbles.

The dentist handed over my tooth, too, and told me to put it under my pillow. The next morning, it had been replaced with a dollar bill. Rewards for making it through an uncomfortable situation with as much strength as my 7-year-old self could muster.

But a viral tweet over the weekend revealed that rewards aren't quite so simple for kids right now.

Among thousands of reactions to the March for Our Lives that poured in on social media, one Boston librarian’s experience painted a clear and sinister picture of how school shootings and lack of meaningful gun control has affected even the youngest students.

On Twitter, Laura Koenig posted a picture of a lollipop a 6-year-old handed to her. The simple message attached read: "This is the prize I get for staying silent during active shooter drills."

The aim of the lollipops — part of a mission called Lollipops for Lockdown — is ostensibly a good idea. It’s a way to keep kids calm as they go through the harrowing experience of an active-shooter drill, a way to train kids to stay quiet as they wait for the all-clear.

It’s certainly better than the idea that schools should arm students with rocks, or as Rick Santorum suggested, that kids should be trained in CPR instead of pushing for stricter gun laws.

Still, the reward is a band-aid, a stopgap measure that puts the onus entirely on kids for their own safety rather than a wake-up call that things must change.

As an article on Scary Mommy points out, lollipops are given to kids for a multitude of reasons, and to associate these childhood rewards with active-shooter drills is more than just "bone-chilling." The image it draws up, Cassandra Stone writes, is "of a classroom full of first graders sucking on these lollipops while hiding from a shooter on a murderous rampage is so jarring it makes me physically ill."

As reactions to Koenig’s tweet came in, it became clear that the lollipops are problematic on a huge scale.

One teacher pointed out that she keeps lollipops in the closet so that kids "can suck on them and try to keep quiet" in order to not be found.

A father chimed in on the thread to say that at his kids' school, teachers had to ask parents to chip in for the lollipops because the school wouldn’t pay for them. What is the government considering instead? Earmarking millions of dollars that would go not to education but to arming teachers — a move that’s already been decried as disastrous.

But perhaps the most frightening thing about the lollipop movement is the fact that the idea that schools aren’t safe places — and wouldn’t become any more safe with more guns in place — is becoming more and more normalized in the eyes of children.

A protestor at the March for Our Lives. Photo by Alex Edelman/AFP/Getty Images.

As Stone recounts in her post, at a recent family gathering, the lights were turned off in the basement so the kids could play video games in comfort, and one child remarked, with no shock or surprise, "Oh, this is just like a lockdown drill."

This shouldn’t be happening. But it is. And it’s getting worse.

In a recent piece, my colleague Annie Reneau recounted the way that children are being prepared for active shooters invading a place that kids should feel safe.

One school saw police officers shooting blanks during a drill to drive home the point of what a real gun sounds like. In another instance, a teacher told a student who coughed during a drill that if a real shooter had been on the scene, the entire class would have been dead.

Protestors at the March for Our Lives hold up photos of students killed in gun violence. Photo by Spencer Platt/Getty Images.

It’s terrifying to think of as an adult. As a child, I wouldn’t have been able to sleep that night. I would have been petrified to return to school knowing that the worst thing that could happen wasn’t a bad grade on a math test, but the possibility of my mistake — an involuntary physical response — sealing the fate of the people with whom I ate lunch and played tag on the playground.

That’s why these lollipops, no matter how well-meaning, can’t be seen as a triumph.

Instead, they should be seen for what they really are: A clear message that the only way we can keep our kids safe is by changing the way we think about and handle gun control in our country.

Most importantly, we must listen to the kids who are leading the charge of the #NeverAgain movement. As they walk out of classes in protest of the government's inaction, as they crowd the streets begging the government to value their lives, we need to heed what they’re saying rather than placate them with solutions that put the responsibility for their safety against guns squarely on their shoulders.

Children want safety. They want an education. And they need a place where they can get both without having to learn that lollipops are a means of keeping them alive, that their teachers are armed, or where the bucket of rocks they’re meant to throw at an active shooter is stored. Only widespread gun reform can change that.