17 photos of adorable kids who were born prematurely, now holding their own baby pictures. 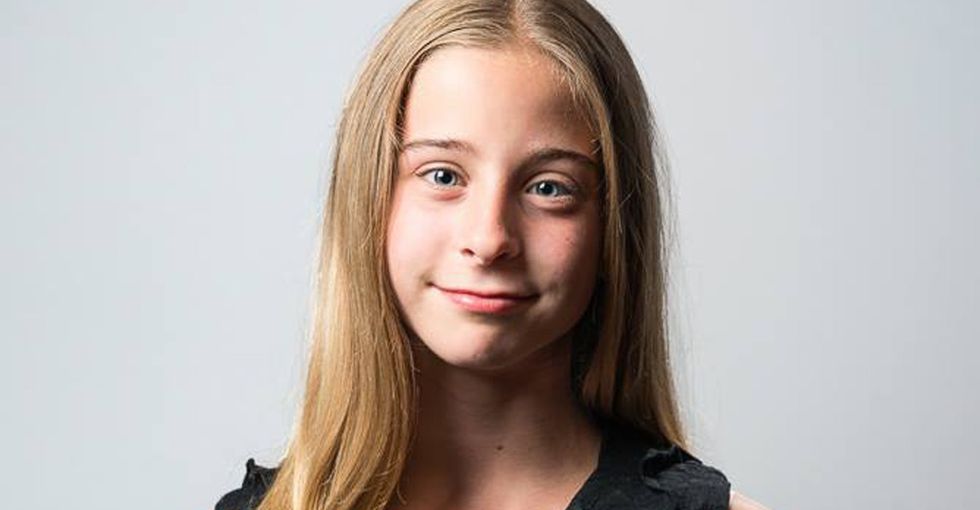 This article originally appeared on November 6, 2015

Every single day, babies across the world are born prematurely, which means that they're born before 37 weeks of gestation.

Red Méthot, a Canadian photographer and student, decided to capture the resilience of many of these kids for a school photography project.

He's the father of two prematurely born kids himself, so the topic is important to him.

"My son was born at 29 weeks and my daughter at 33 weeks," he told me in a phone interview. "These are the kind of pictures I would like to have seen when my first child was born — they've been through that, and they are great now."

Méthot said he knows not all preemie stories have a happy ending — one of his photos features a child whose twin passed away after they were born prematurely — but for so many kids who come early, they go on to experience a great life.

Meet several of the beautiful kids he photographed!

Original. All photos belong to Red Méthot, who gave me permission to share them here.

11. Noah, born at 32 weeks; his twin sister, Victoria (on the left in the framed picture), passed away when she was one month old

Méthot's school project originally consisted of 10 photos, but the reaction has been so positive and he's enjoyed taking them so much, he continued adding to the collection.

Currently, he has captured 50 images. (You can view them all in the album on his Facebook page!). Méthot told me that his favorite part of the project has been meeting the subjects.

"Each time I meet a new person, I [learn] about a new story," he said.

And I think we can all agree that Méthot is a wonderful storyteller through his photography. Between his photos showing the bright future so many premature babies have and his photo showing the loss, he captures reality beautifully.

'De-condition and unlearn what you’ve been wired to think: that women are your competition.'

The 2023 Golden Globe Awards was an incredible night for Michelle Yeoh. The 60-year-old actress had waited 40 years to play the lead in a Hollywood film, and winning the Golden Globe for Best Actress in a Comedy for her starring role in "Everything Everywhere All at Once" was a dream come true.

Yeoh's moment in the spotlight made headlines that night as her award speech went viral. But following the ceremony, another moment went viral—the split second Yeoh's name was called as the winner and the reaction of her co-star, Jamie Lee Curtis.

Curtis herself had been nominated for the Best Supporting Actress award for her role in the film but didn't win. (That award went to Angela Bassett in "Black Panther: Wakanda Forever.") But whatever disappointment Curtis may have felt about not winning her own award did not diminish her response to Yeoh's win, which was immediate, intense and immensely joyful.

Shakespeare's plays were 'fluid' to say the least.

Tod Perry
via Pixabay and Ballotpedia

In William Shakespeare's “Sonnet 59,” he makes the point that there is “nothing new but that which hath been before.” Here, he admits that even the Bard himself struggled to come up with new ideas that hadn’t been written about previously.

This problem stems from the fact that people tend to think the struggles we have today are entirely new when they’ve been part of the human drama for centuries. A great example is how society grapples with gender nonconformity. In 2023, there is a vigorous debate, which tends to fall along political party lines, over the use of personal pronouns.

Gen X advice for Gen Z: Woman shares the things she wishes 'somebody told me in my twenties’

'You date people you think you deserve. You deserve better.'

Meghan Smith is the owner of Melody Note Vintage store in the eternally hip town of Palm Springs, California, and her old-school Gen X advice has really connected with younger people on TikTok.

In a video posted in December 2022, she shares the advice she wishes that “somebody told me in my twenties” and it has received more than 13 million views. Smith says that she gave the same advice to her partner's two daughters when they reached their twenties.

The video is hashtagged #GenX advice for #GenZ and late #millennials. Sorry older millennials, you’re too old to receive these pearls of wisdom.

Keep ReadingShow less
advice
Get stories worth sharing delivered to your inbox
By signing up you agree to Upworthy's privacy policy.
Community

Hannah Bullen-Ryner uses just nature and her hands to make creatures that are meant to blow away.

Some people create art as a way of immortalizing a piece of themselves, to leave behind some creative evidence of their existence and communicate through their art long after they are gone. But what of those who create art that isn't meant to last?

Hannah Bullen-Ryner, a full-time mother to twins, walks to the woodlands and fields about 10 minutes from her flat in Hertfordshire, England, each day as a ritual. She sits immersed in nature, in all kinds of weather, and creates whatever creature decides to "visit" her out of whatever natural items she can forage.

She uses no tools—no scissors, clippers or glue. All she has are her hands and her camera to capture her creations before they are scattered by the wind or washed away by rain.

The announcement follows Bob Iger's return to his role as Disney CEO.

Let’s face it. Disneyland might have once been dubbed “the happiest place on Earth,” but over the years that title has lost its merit. Complaints about cheapened experiences are common—from huge crowds, to broken-down rides and even foul smells. This, combined with insanely high ticket prices, has made guests feel like the Disney magic has dimmed.

However, it seems that Disney might be helping the wish for a better park come true, as it just announced several positive updates happening to its resorts in 2023.

One of the biggest changes will be more days available to purchase low-tier tickets at $104. Folks should be seeing nearly two months worth of these low-cost ticket days.

In addition, guests will receive more flexibility with Park Hopper tickets—allowing them to cross over to different parks starting at 11 a.m.—as well as complimentary Disney PhotoPass digital photo downloads.

“I would love it if we would just change this whole f**king structure.”

“I would love it if we would just change this whole f**king structure.”

Cate Blanchett might be taking home awards for her portrayal of a disgraced composer and titular character in the film “Tár.” But if she had it her way, there wouldn’t be an award to take home. While delivering her “Best Actress” acceptance speech at the Critics Choice Awards, Blanchett challenged the need for awards shows, calling them “televised horse races.”

She didn’t mince words. “I would love it if we would just change this whole fucking structure.”

“Why don't we just say there was a whole raft of female performances that are in concert and in dialogue with one another?” she said to the audience, celebrating the “extraordinary” performances by her fellow nominees — Viola Davis, Danielle Deadwyler, Margot Robbie, Michelle Williams and Michelle Yeoh.