'What's not to love?' This 'Orange Is the New Black' star is what self-acceptance looks like.

Before "Orange Is the New Black" or her stand-up comedy career, DeLaria struggled like so many others. 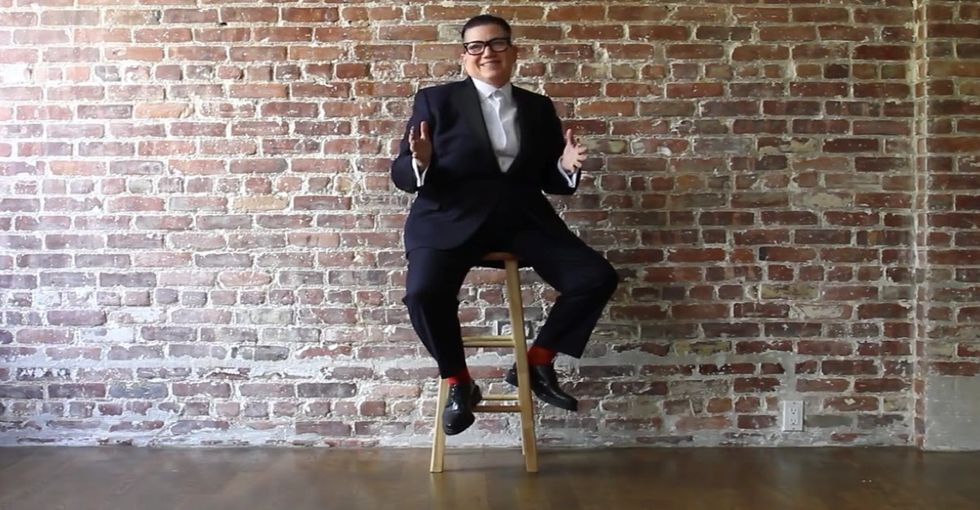 Sometimes, coming to terms with yourself can be a lifelong process.

That's the message Lea DeLaria puts out in a recent video she did for StyleLikeU.

You probably best know DeLaria as "Big Boo," Litchfield Penitentiary's resident confident butch lesbian on the Netflix series "Orange Is the New Black." And while her on-screen persona aligns in a number of ways with her own life, it wasn't always that way.

GIF from "Orange Is the New Black."

The video begins with DeLaria explaining what it is she strives for in life: self-acceptance.

Fans of stand-up comedy might remember DeLaria as the first openly gay comedian to appear on a late-night talk show — a feat accomplished in 1993 on "The Arsenio Hall Show."

"It's hip to be queer, and I'm a bi-i-i-i-ig dyke!" she famously announced to her TV audience.

"I hated myself for not being 'normal.' At that time, [being gay] was still considered a mental disease."

Still, behind that bravado was someone desperate to debunk myths about what it's like being a butch lesbian.

All remaining GIFs via StyleLikeU.

She touches on her path to stand-up comedy, which followed a stint as a carpenter.

"Stand-up comedy in those days was a big activist tool, so that's what I started doing," she says. "I'm very grateful for that because I probably would have, you know, put a gun in my mouth if I didn't have that. ... I think, personally, my coming out experience was very, very difficult ... because I thought I was the only one."

Afraid of rejection, she didn't come out to her parents until she was 28. To her surprise, they accepted her.

When she eventually came out to her parents, her father had no idea. "Let me just say to that, 'Look at me,'" she jokes. Her parents' acceptance was made a bit easier by her career success (she guest starred on an episode of "Matlock" around that time).

"I hated myself for not being 'normal.' At that time, [being gay] was still considered a mental disease."

Introspection didn't end with her sexuality. There was another issue to tackle: accepting her weight.

Working in the entertainment industry, she was hit with a lot of the sexist double standards around appearance and weight.

But when it comes to women? Women are constantly sexualized and told their value hinges on how attractive men find them. But DeLaria isn't having it. "There's nothing wrong with [being fat]. It's that simple."

According to her own words, she's not beautiful. She prefers "handsome" — thank you very much.

Earlier this year, she got engaged to her longtime girlfriend, fashion editor Chelsea Fairless.

DeLaria bristles at the question, "When do you feel the most beautiful?" replying, "I never think of myself as 'beautiful,' so that's a very strange word to apply to me, I think."

"I'm more of a handsome person. When my fiancée looks at me with this look in her eye, and I can see that she's completely and utterly in love with me, she makes me feel really handsome. Even when she's mad, I can still see it in her eyes."

You can watch the complete interview below.

Just an FYI, it contains some explicit and NSFW language.