Watch Michelle Obama 'shake it off' with a 2-year-old fan in this adorable video. 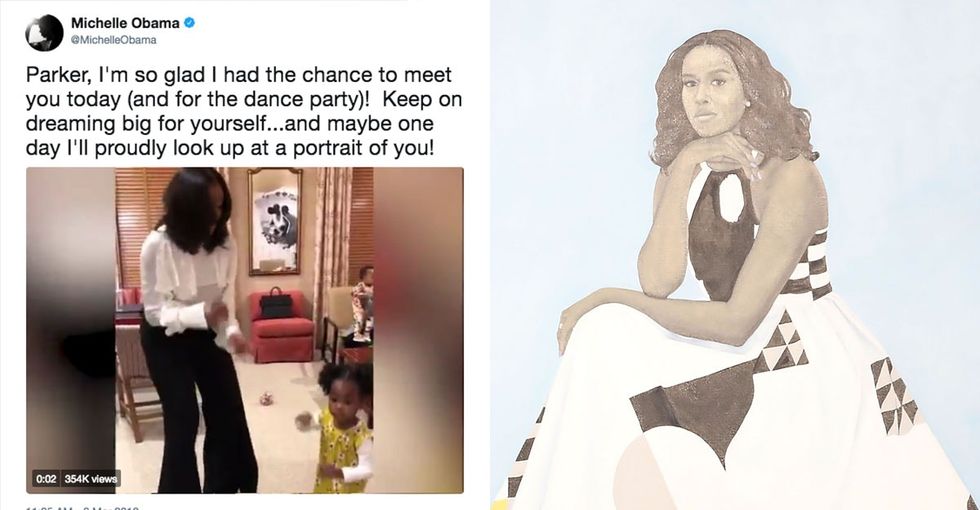 On March 1, a photo of a little girl staring at Michelle Obama's new portrait at the Smithsonian's National Portrait Gallery went viral.

Taken by a North Carolina man named Ben Hines, the image captured a 2-year-old girl named Parker Curry in a moment of awe. Hines' Facebook post, in which he said he was "delighted to wait in line behind this fellow art lover & hopeful patriot," went mega-viral, racking up tens of thousands of shares and melting the hearts of everyone in its path.

On its own, that's a really freakin' cute story, but it gets even better — a lot better.

Donna Hines & I made a pilgrimage today and we were delighted to wait in line behind this fellow art lover & hopeful patriot.

On March 5, Parker and her mom, Jessica, appeared on BuzzFeed's AM to DM show on Twitter. "I want to see [Michelle Obama]!" Parker said.

"I want you to see Michelle Obama too," added AM to DM host Saeed Jones. "What would you say to her?"

"She's a queen!" Parker replied. Again, this is just major cuteness overload — but this story isn't done just yet.

On March 6, Michelle Obama(!!!) posted a video of her dancing with little Parker.

"Parker, I'm so glad I had the chance to meet you today (and for the dance party)!" wrote the former first lady. "Keep on dreaming big for yourself ... and maybe one day I'll proudly look up at a portrait of you!"

The short clip shows the two rocking out to Taylor Swift's "Shake It Off" while Jessica smiles in the background.

Parker, I'm so glad I had the chance to meet you today (and for the dance party)! Keep on dreaming big for yoursel… https://t.co/KtJxmzfGDI
— Michelle Obama (@Michelle Obama)1520357146.0

The heart-melting cuteness of the story aside, this is exactly what Obama was talking about during the portrait's unveiling.

One of the most iconic moments of Obama's speech at the unveiling was when she talked about why representation matters — especially to young girls.

"I'm also thinking of all the young people, particularly girls and girls of color, who will see an image of someone who looks like them hanging on the wall in this great American institution," she said. "I know the impact that will have on their lives, because I was one of those girls."

Less than a month after going public and the portrait is already inspiring girls to dream big.

Michelle Obama looks on as her portrait is unveiled on Feb. 12. Photo by Saul Loeb/AFP/Getty Images.

Dr. David McPhee offers advice for talking to someone living in a different time in their head.

Few things are more difficult than watching a loved one's grip on reality slipping away. Dementia can be brutal for families and caregivers, and knowing how to handle the various stages can be tricky to figure out.

The Alzheimer's Association offers tips for communicating in the early, middle and late stages of the disease, as dementia manifests differently as the disease progresses. The Family Caregiver Alliance also offers advice for talking to someone with various forms and phases of dementia. Some communication tips deal with confusion, agitation and other challenging behaviors that can come along with losing one's memory, and those tips are incredibly important. But what about when the person is seemingly living in a different time, immersed in their memories of the past, unaware of what has happened since then?

Psychologist David McPhee shared some advice with a person on Quora who asked, "How do I answer my dad with dementia when he talks about his mom and dad being alive? Do I go along with it or tell him they have passed away?"