Trump tried to troll Michigan's Secretary of State on voting laws. It didn't end well for him. 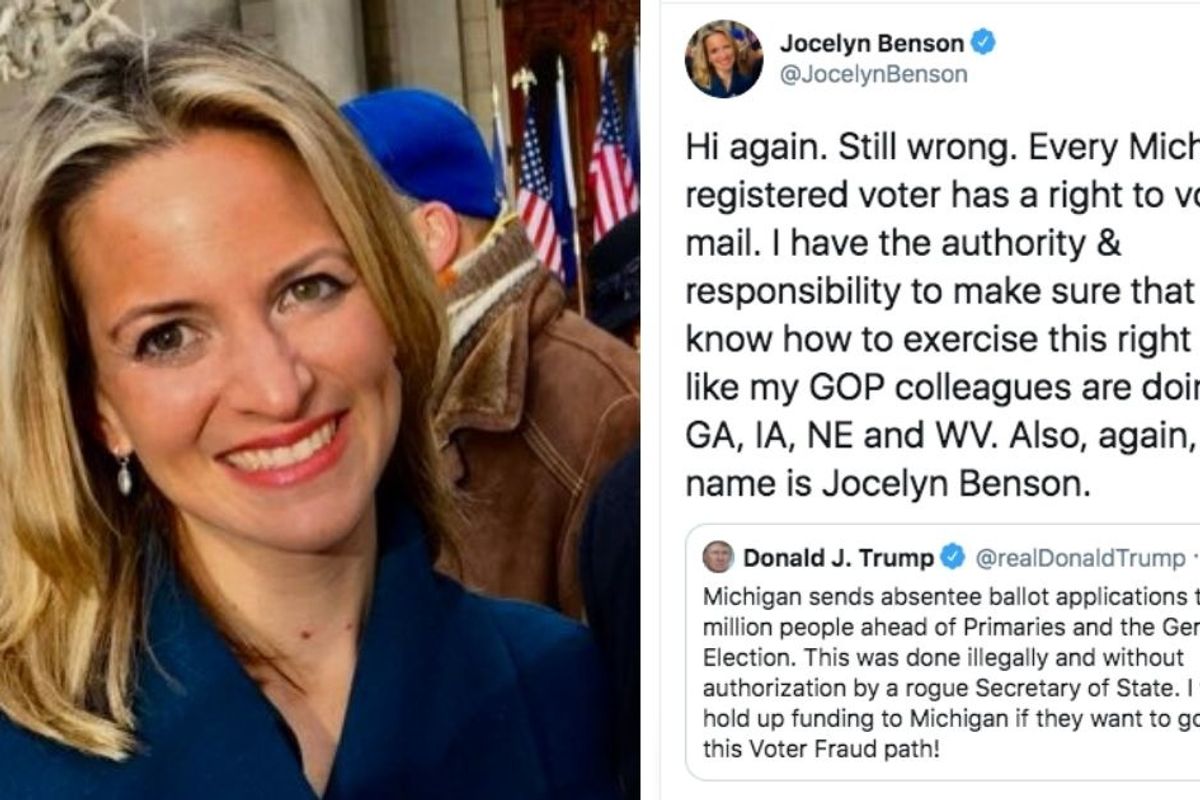 In a now-deleted tweet, President Trump engaged in one of his favorite pastimes on Wednesday—accusing another elected official of committing a crime on Twitter.

This time, the object of his accusation was Michigan's "rogue" Secretary of State, Jocelyn Benson. The crime? Trump accused her of "illegally and without authorization" sending absentee ballots to 7.7 million people in her state. He threatened to withhold funding to Michigan saying, "If they want to go down this Voter Fraud path!" (Ahem, is "voter fraud" a proper noun, sir?)

Benson responded to Trump's tweet in the best way possible—she fired back with facts and a reminder of her name.

"Hi!" she wrote, with a wave emoji. "I also have a name, it's Jocelyn Benson. And we sent applications, not ballots. Just like my GOP colleagues in Iowa, Georgia, Nebraska and West Virginia."

The president was roundly called out for being so inaccurate. Trump partially corrected his previous tweet two-and-a-half hours later, only adding the word "applications," but but still falsely claiming the mail-in voting broke the law.

The president seems hell bent on making people believe that mail-in voting is "ripe for fraud" and that making it easier for people to vote by mail is somehow beneficial for Democrats. Let's not forget he voted by mail in Florida in March. Or that Washington and Oregon, who have had all-mail-in voting for years, both have Republican Secretaries of State overseeing their elections. Voter fraud, despite claims to the contrary, is a statistically insignificant occurrence—and a bipartisan one at that.

Benson, again, responded with the facts. And again, she reminded him that she has a name.

"Hi again," she wrote. "Still wrong. Every Michigan registered voter has a right to vote by mail. I have the authority & responsibility to make sure that they know how to exercise this right - just like my GOP colleagues are doing in GA, IA, NE and WV. Also, again, my name is Jocelyn Benson."

Hi again. Still wrong. Every Michigan registered voter has a right to vote by mail. I have the authority & responsi… https://t.co/VoYTtAdLZ1
— Jocelyn Benson (@Jocelyn Benson)1590001969.0

Benson insisting that President Trump call her by her name may seem like a small thing, but it's not. In fact, it might be the most powerful part about her responses. The president has a habit of not referring to women he doesn't like by name, instead making up childish nicknames for them or simply omitting their name altogether. It's a power play of sorts—one that Benson expertly diffuses in her tweets to him.

As political historian Heather Cox Richardson pointed out on Facebook:

"From Moby Dick's famous beginning 'Call me Ishmael' to the fear in the Harry Potter books of calling the evil Voldemort by name, invoking someone's name makes them a power to be reckoned with. In this case, a woman doing her job, insisting on reality that interrupts Trump's narrative, repeatedly demands that he use her name.

Indeed she does. That's exactly what the president is afraid of."

Strong, smart and self-respecting women who don't peddle "alternative facts" are Trump's kryptonite. He doesn't know what to do with them, other than attack them with false claims and nicknames. In the space of two tweets, Jocelyn Benson managed to not only correct the president's falsehoods, but also show that she's not going to let him play that game. It's ridiculously unfortunate that government officials have to battle lies from the president on Twitter, but since that's how he's chosen to communicate, that's where it has to happen.

Of course, Benson's office also issued official statements on the matter, because despite appearances, governance is not actually done over Twitter. The Department of State wrote:

"President Donald Trump's statement is false. The Bureau of Elections is mailing absent voter applications, not ballots. Applications are mailed nearly every election cycle by both major parties and countless advocacy and nonpartisan organizations. Just like them, we have full authority to mail applications to ensure voters know they have the right to vote safely by mail."

We need to see women standing calmly and confidently in the storm, providing factual, low-key fierce rebuttals to the blatantly false accusations that keep flying from the president's fingertips.